For the first time, two integrated marketing communications majors were on the winning team in the public relations on-site competition for the Southeastern Journalism Conference Competition.

“I am so proud of what our students do,” said IMC Assistant Dean Scott Fiene. “And the fact that the winning three-person team is comprised of both IMC and journalism majors is testament to how students from both our degree programs work together and are prepared for real-world scenarios.”

For the competition, held on the campus of Middle Tennessee State on Feb.15, the team had two hours to complete a communications plan addressing a hypothetical public relations situation given them. 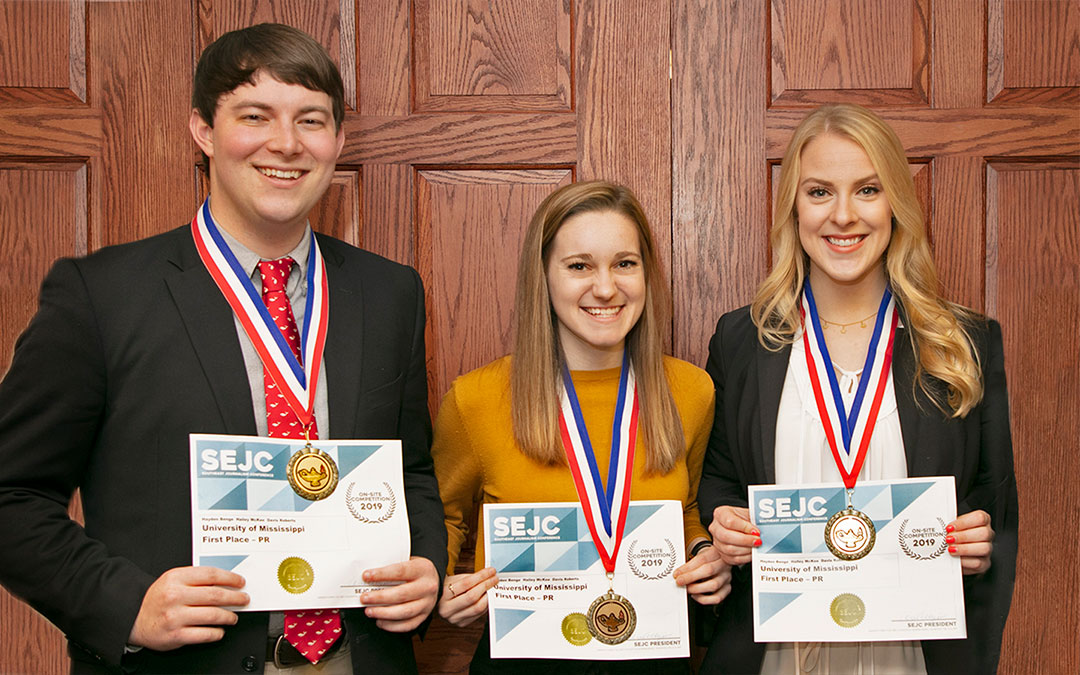 For the first time, IMC students were on the winning team that brought home first place in the on-site PR competition at the Southeastern Journalism Conference Feb. 15. Team members had two hours to create a communications plan for a PR situation they were given. Pictured, left to right, are team members IMC major Davis Roberts, Journalism major Hailey McKee and IMC major Hayden Benge and (Photo credit: Stan O’Dell)

“The situation was detailed, complex and longer than any of us expected,” McKee said. “Though there was temptation to become frozen with pressure, when we started tossing out different ideas and creative strategies for the campaign, I think we quickly found our groove and had a lot of fun with the situation we were given.”

Roberts attributes their success to what he learned in his IMC classes.

“In IMC, I’ve been taught to focus on a particular situation and learn everything I can in order to compose the right message for the right people and effectively deliver that message in a consistent manner across multiple channels,” Roberts said.

Benge and other team members particularly credited their PR classes.

“The 491 and 492 classes for the public relations specialization were very helpful in preparing us for the competition,” Benge said. “The assignments in the classes required us to create PR plans similar to the one in the competition. Having that background definitely assured us that we knew what we were doing.”

The students’ instructor for those classes, Senior Lecturer Robin Street, asked the students to enter the competition.

“I already knew how outstanding these students are, so I never doubted they would win,” Street said. “They all excel in planning, creating and implementing a communications strategy plan.”

Street has also nominated the students, all seniors, for a separate award from the Public Relations Association of Mississippi for Student of the Year.  Those awards will be announced in April.

At the SEJC conference, Assistant Dean of the JNM School Patricia Thompson was named Educator of the year. Six journalism students also placed in other on-site competitions. In addition, journalism students won multiple awards in the Best of the South competition for work they had completed during the school year.

For more information on the SEJC competition results, visit  https://jnm.olemiss.edu/2019/02/19/assistant-dean-students-earn-21-awards-at-journalism-conference/.