It was 55 years ago this month that the University of Mississippi campus was engulfed in a riot when James Meredith sought to enroll in the state’s flagship university.

Segregationists from around the South had descended on the campus and a riot ensued. More than 300 reporters traveled to Oxford to cover the story.

Some were beaten; others had their equipment damaged or set on fire. Agence France-Press reporter Paul Guihard was murdered, the only reporter killed during the civil rights era.

The issues then were as stark as they are today – as demonstrated by protests and demonstrations occurring in Memphis and across the nation regarding the existence of Confederate memorials on public grounds. 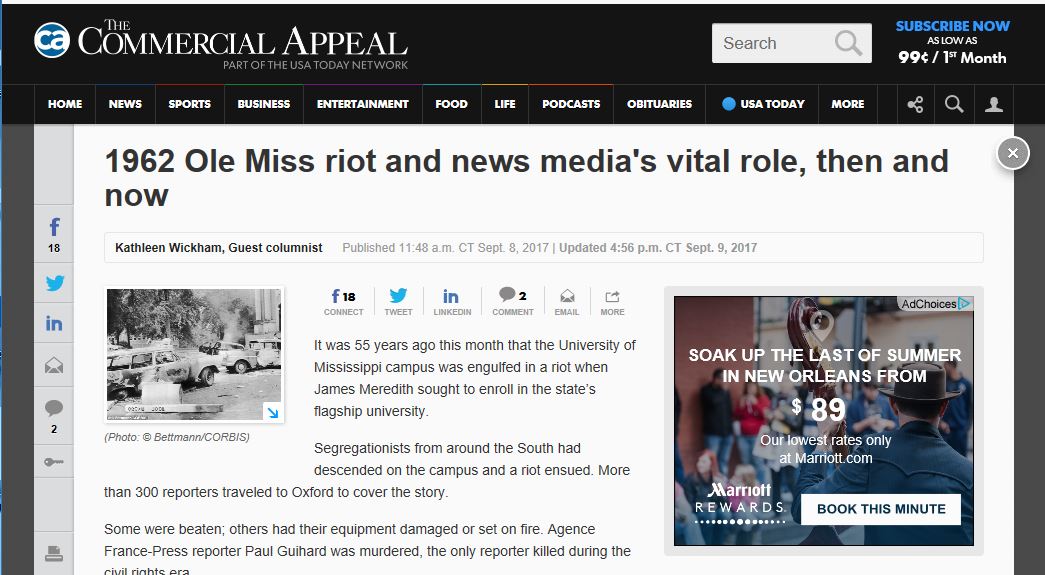 In today’s climate the emotions on both sides are as raw as when the monuments were installed, the beliefs as rigid and the hate as repulsive.

But at a time when claims of so-called “fake news” are used to undermine the press’s credibility, it’s worth reminding ourselves of the role of the press in reporting riots, protests and disturbances.

That role – granted by the First Amendment – is to monitor the actions of government and powerful people and institutions by providing a reliable source of information about how law enforcement, public officials and citizens react to events and protect people and property.

Attacks on the press for performing this work are an affront to democracy. Journalists report the news without fear or favor on behalf of the people.

The reporters who descended on Oxford in 1962 were doing just that. They were driven to seek the truth and inform the public about what was happening.

In my new book “We Believed We Were Immortal: Twelve Reporters Who Covered the 1962 Integration Crisis at Ole Miss“, I explore the crisis through the words and experiences of journalists who were there.

They include Sidna Brower, the Memphis reared editor of the student newspaper; Claude Sitton of The New York Times, known as the dean of the civil rights press corps, Dorothy Gilliam, also a Memphis native who was the first African-American woman hired by The Washington Post; Michael Dorman of Newsday, who explored the town’s attitudes as evidenced by the Faulkner family; and Tupelo-native Neal Gregory of The Commercial Appeal, who wrote about the mood of Oxford’s religious community.

Guihard’s unsolved murder is also a significant aspect of the book. Former CBS News anchor Dan Rather, another reporter who came to Oxford in 1962, spoke at the 2010 dedication of a memorial marker for Guihard.

Rather observed that the job of a reporter is to bear witness and “be an honest broker of information. To take the viewers to the scene …to get as close to the truth as you possibly can, recognizing that most of the time you can’t get the truth, the whole truth, and nothing but the truth.”

Journalism is viewed as the first draft of history. It is through such drafts that truth emerges. Journalists speak for their communities and create public conversations, emboldened by the belief that their stories shed light on public affairs and can change the world.

Dr. Kathleen Wickham, a former Memphian, is a journalism professor at the University of Mississippi. She is scheduled to sign copies of her new book at 5 p.m. Sept. 12 at Square Books in Oxford, and at 6 p.m. Sept. 15 at Novel bookstore in Memphis.

This column was originally published in The Commercial Appeal.