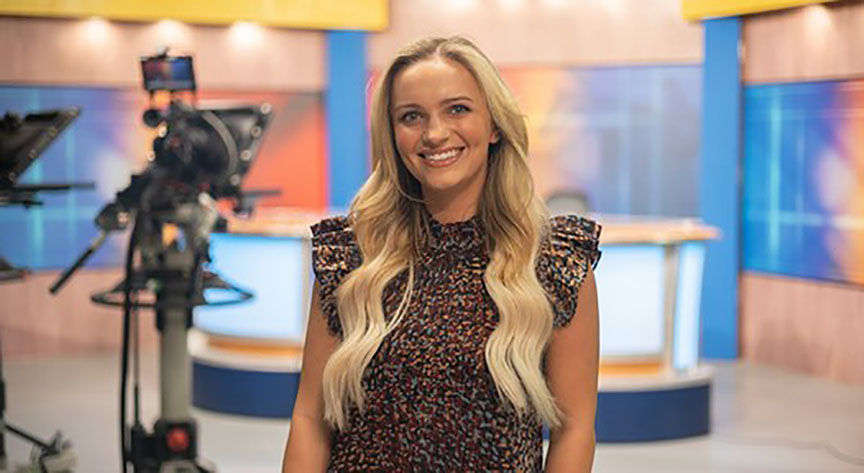 For Anna Caroline Barker, a journalism graduate student from Nashville, being on television has been a lifelong dream.

“Growing up, I always wanted to be on TV, whether it was the news or the weather,” she said. “NewsWatch Ole Miss has made me one step closer to making that dream a reality.”

Prior to serving as the NewsWatch Ole Miss manager, Barker worked as a news correspondent, building her newsreel and making invaluable connections.

“NewsWatch has opened so many doors for me, and I have gained some great experience and met some amazing people along the way,” she said. “NewsWatch has not only prepared me for the TV journalism business experience-wise, but also has given me connections to stations in many places, even outside the South.”

Barker says she owes her growth as a journalist to NewsWatch and the Student Media Center.

“I truly wish I’d become part of the SMC sooner,” she said. “NewsWatch has pushed me to do things I didn’t believe I was capable of doing. It has taught me how to be a leader and how to work as a team. Everyone around you cares about your success and wants to see you improve. So, if you’re even just thinking about joining the SMC, go for it! You won’t regret it, and you will accomplish things you never even knew you could.” 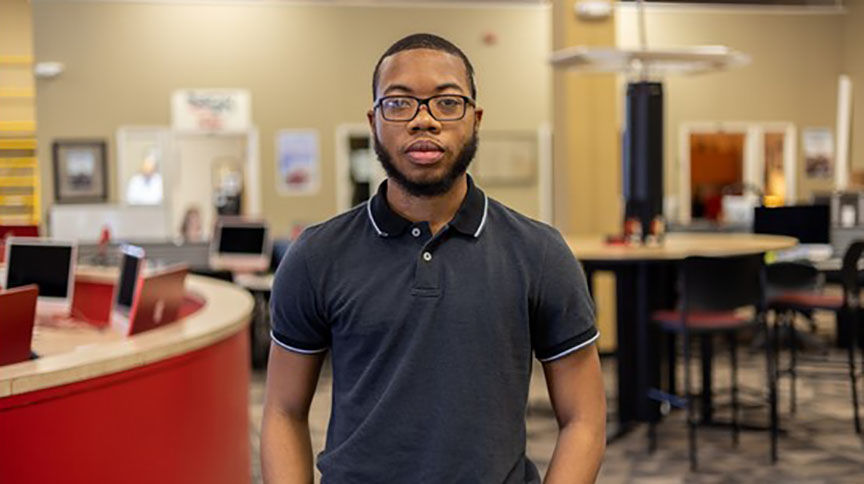 Jaylin Jones, a senior Real Estate major from Lucedale, Miss., will serve as advertising sales manager for the fall semester after having previously held the position in spring 2022. Jones, who was drawn to Ole Miss by the “wide variety of opportunities and resources within the School of Business,” joined the Student Media Center after stumbling upon a listing for a sales position.

“The SMC offers many positions that are very versatile,” said Jones. “Every position in the office is one that will stand out on a resume and prepare you for a postgraduate career. The opportunities are prevalent, the work is fun and the experience is never-ending.”

“I simply plan to continue what I started at the SMC,” said Jones. “Hopefully, I will have a long and successful career in sales.” 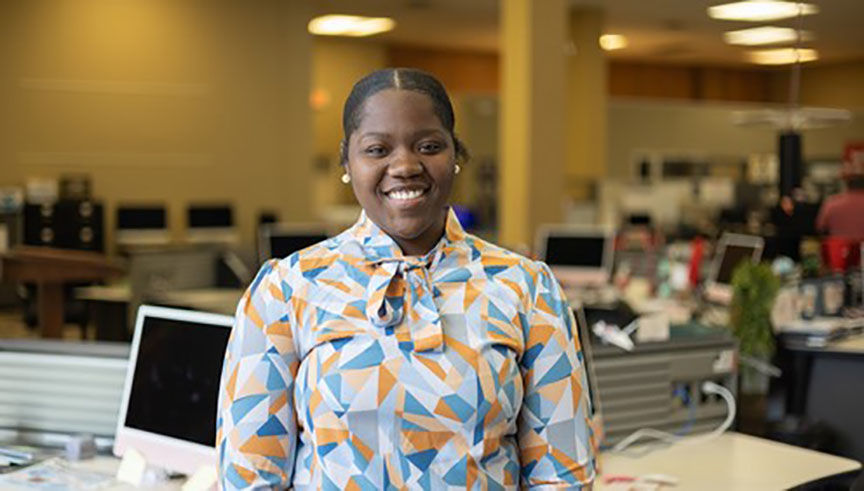 Rabria Moore has always known she was meant to be a writer, and that is exactly what drew her to the Student Media Center and The Daily Mississippian.

“I’m able to use words to paint pictures and tell stories about people’s lives,” she said, “and that’s definitely been the best part of working in the Student Media Center.”

Moore, a senior journalism and political science double major from Durant, Mississippi, came to Ole Miss specifically because of its journalism program. It was on her first tour with former Dean of the Student Media Center Patricia Thompson that Moore was introduced to the SMC.

“[Dean Thompson] showed me around the SMC and introduced me to so many different opportunities that I could pursue,” said Moore. “She’s a large part of why I chose Ole Miss.”

Before becoming editor-in-chief, Moore worked in several roles at the The Daily Mississippian, from writer to assistant news editor, and now her current position. After graduation, Moore hopes to write for a national or international news organization, a goal she confidently pursues thanks to her experience with the SMC.

“The different jobs I’ve been able to do, from writing to editing to managing a team of editors, has been very beneficial,” she said. “The SMC has also placed me in positions to meet people who I never would have met otherwise. It is not only a great place to work, but it’s also good for networking opportunities. You get a taste of what it’s like to work in journalism; being here helps you determine if this is what you want to do for the rest of your life.” 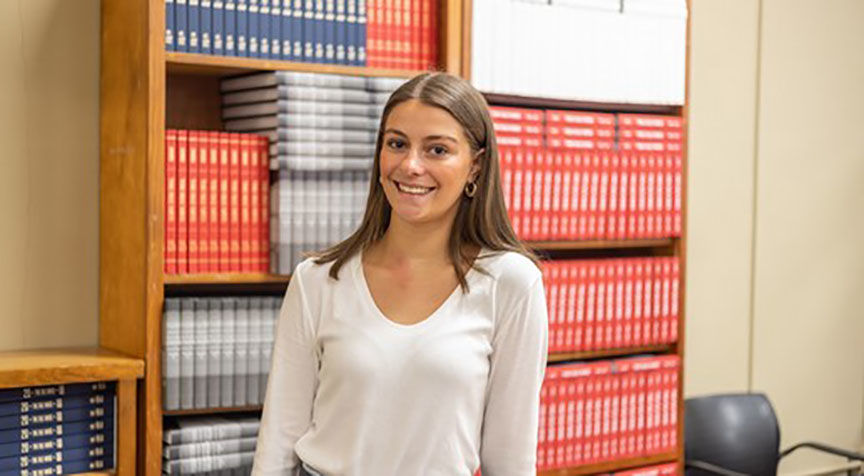 “I learned so much from [the business manager] position, but I never imagined myself being the editor,” said Mulholland. “Taking this role has pushed me far beyond my comfort zone in the best way possible.”

Mulholland and her staff have been working hard to fill the 360-page yearbook that will ultimately serve as permanent documentation of the school year, something Mulholland finds exciting.

“I love that The Ole Miss is such a staple part of our school’s history, because it serves as an archive for so many years in the past,” she said. “So much time and effort goes into it each year, and it lasts forever, and I’m so proud of what we are able to give the students each year. I’m so excited to be part of something that is such a large and lasting piece of Ole Miss history.”

Mulholland encourages any student who is interested in media to join the Student Media Center.

“The SMC offers so many amazing opportunities for student-led publications and productions that can serve as a lasting portfolio long after you have left Ole Miss.” 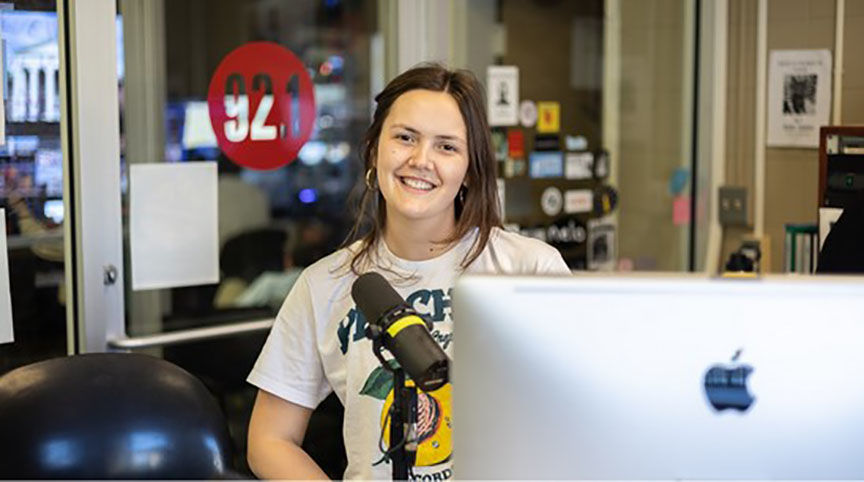 Junior Jillian Russell, a business major from Brandon, Mississippi, never thought she would return to Mississippi to finish school but, according to her, “It’s funny how things work out.”

Russell, who originally attended an out-of-state university, transferred to Ole Miss to earn her degree. Since then, Russell has become incredibly involved in the Student Media Center, first serving as a Rebel Radio DJ and station marketing director before moving into her current role as station manager.

“I love music, and I knew upon transferring that I wanted to find a creative outlet on campus,” said Russell. “[The SMC and Rebel Radio] seemed like the best of both worlds.”

Russell, who plans to pursue a career in the music industry, loves the collaborative nature of her role.

“I love how interpersonal and hands-on it is,” she said. “Wherever I end up, I think I will always apply the lessons I’ve learned from being a manager.”

You can learn more about the Student Media Center here. If you are interested in becoming a part of it, reach out to one of the leaders.