Maria Martin, a University of Mississippi School of Journalism and New Media graduate, has been in the game of sports reporting since graduating in 2014. Her latest win is working at 11Alive, WXIA-TV in Atlanta.

“I am a sports anchor and reporter,” she said. “I have a podcast, a 30-minute sports show every Sunday, and the daily responsibilities and grind of being in a top market.”

A native of the West Palm Beach, Florida area, Martin graduated from UM in 2014, earning a degree in broadcast journalism with a minor in English.

“After I graduated from UM, I moved back home and worked three different jobs trying to break into the sports industry whatever way possible,” she said. “I worked in the University of Miami communications department doing everything from shooting practice video to doing sit-down interviews with players during fall camp.” 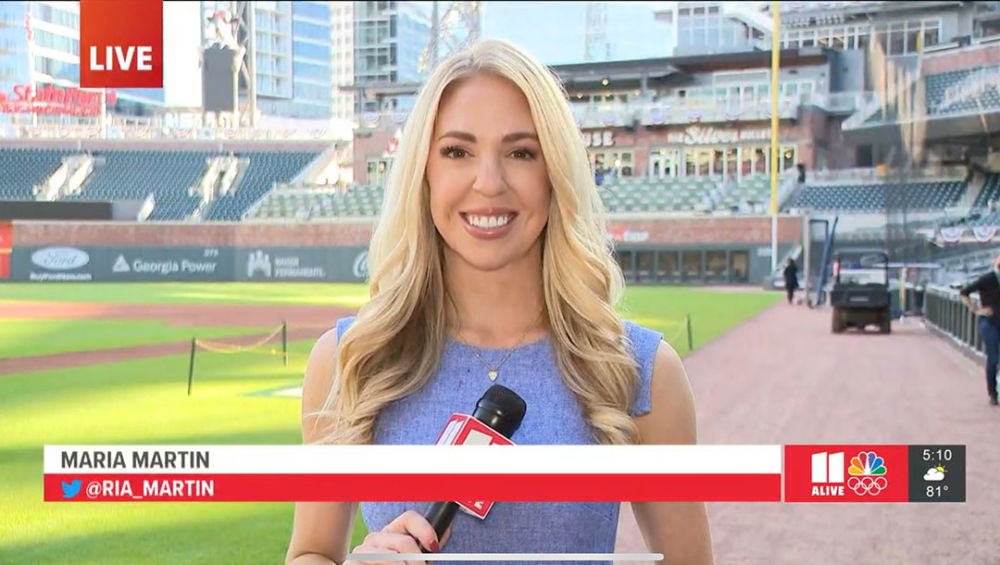 Martin also worked at “SEC on CBS” as a production assistant, traveling the country with the team and learning from the sideline reporter. At ESPN West Palm on WPTV, she was involved in both radio and television, preparing for an opportunity.

“A coworker of mine at WPTV told me I really needed to go somewhere where I got on-camera opportunities every day,” she said, “so I took the leap and did exactly that. I built my reel up and found my next landing spot to be Montgomery, Alabama with WSFA. This was my first full-time on-air position in the television business, and I was the weekend sports anchor and reporter.”

Martin stayed there for three years.

“It was the best decision I ever made professionally and personally,” she said. “I grew exponentially being on camera consistently every day. I covered three straight national championships, three straight SEC championships, a Final Four, a College World Series, multiple first-round draft picks in the NFL, and even the first overall pick in MLB.”

Martin said it was an incredible ride with a lot of national sports exposure and experience.

“I genuinely believe that having small market experience is crucial for young journalists,” she said.

From there, Martin took the job at 11Alive, WXIA-TV in Atlanta where much is expected daily.

“I am never not busy at work, especially in a sports market like Atlanta,” she said. “I’m always either live on location, turning a feature story, aiming to break sports news, anchoring shows, or working on long-form projects.”

“Traditionally, it has been radio personalities, former athletes and beat writers in the market,” she said. “This year, I’ve started to push the show a step further and get coaches, current athletes and general managers on to keep the rotation of guests exciting.”

She also created her own podcast called “Married to the Game,” for which she “interviews coaches’ and athletes’ wives to show the side of sports the average fan never gets to hear from.”

“I am a football coach’s wife,” she said, “so it is easy for me to be empathetic towards the difficult, but an incredible lifestyle that comes with that.”

Martin said challenges in her industry include traveling a lot for work, and many companies don’t pay beginning journalists well compared to the long hours they put in. She often works until midnight or later and on holidays. Free weekends are rare in sports, she said.

Her advice to other industry professionals: Find what makes you unique and use that to your advantage.

“Find your own voice,” she said. “Oftentimes, when you’re just getting started as a journalist, you try to replicate what someone else is doing or has done. The moment you find your own voice is when you can start honing in on your craft and pushing yourself to new heights professionally.”

Tip #2: Jump out of your comfort zone often.

“It only helps you become more well-rounded as a journalist,” she said. “Don’t take yourself too seriously. I am as passionate as they come when it comes to sports journalism, and I truly hope that’s evident by you watching even two minutes of my work, but I am incredibly blessed to do this every day.

“It’s a lot of work. I’ve worked incredibly hard to get to where I am and where I know I’m going. But I’m talking about sports and meeting incredible people every day. This job is rewarding and fun, and I hope you remember that, especially when it gets hard.”

Her advice to students: Throw yourself at every opportunity that arises in college.

“That also means not putting yourself in one box when it comes to journalism,” she said. “Bosses want to know you can do it all these days. The more people you can connect with and show that you’re driven and eager to learn, the better off you are when it comes to getting a job.”

Another tip for students is: Always be willing to take criticism.

“It’s how you will grow,” she said. “Understand that this job takes tremendous sacrifice. I graduated in 2014, and after this football season will be the first time in my entire career I will have Friday and Saturday off. Sports are on the weekends. Sports happen on holidays. It’s incredibly rewarding, but just make sure you’re passionate about it.”

Her last tip: Be kind.

“Above all else, kindness wins in this industry,” she said. “It helps you break stories, build relationships, and climb the ladder in this wild business. I love talking to young, aspiring journalists, so please reach out to me.”

You can find Martin on LinkedIn.