After “The Houston Chronicle” reported that Executive Editor and Ole Miss alumnus Steve Riley was retiring after a 41-year career in journalism, he told HottyToddy.com that it is time to exhale.

Riley, 62, was a Pulitzer Prize finalist and received the Texas Newspaper of the Year and Newsroom of the Year award from the Associated Press Media Editors while at the Chronicle. Riley, who joined the Chronicle in 2017 as senior editor of investigations, also spent more than 30 years at “The News & Observer” in Raleigh, N.C., and also worked as a reporter in Mississippi for “The Clarion-Ledger” in Jackson, “The Sun” in Gulfport and the “Northeast Mississippi Daily Journal” in Tupelo.

A recent Chronicle story featured a quote from the newspaper’s president: “Steve’s leadership of the Chronicle’s newsroom is reflected in the outstanding coverage and investigative work done under his reign,” Hearst Newspaper President Jeff Johnson said in a statement. “This work has been recognized both statewide and nationwide, and most importantly, by our readers. Steve’s commitment to journalism and serving the Houston community is second to none, and we wish him the best in his retirement.” 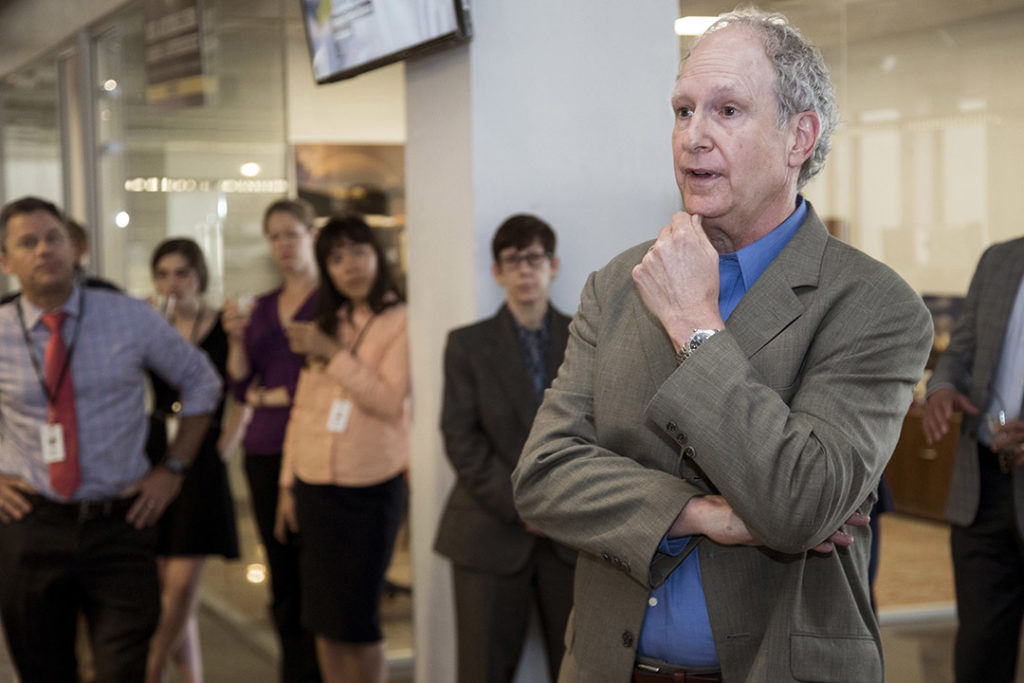 Steve Riley speaks to the newsroom after he was named the Houston Chronicle’s new executive editor on Thursday, May 2, 2019, in Houston. Riley has served as acting editor since Oct. 30, 2018 and was previously the deputy managing editor, investigations, beginning in November 2017, overseeing a team of reporters and a data editor. Before that, he spent more than 30 years at The News & Observer in Raleigh, North Carolina, in roles including: senior editor for investigations, deputy managing editor, metro editor, sports editor, government editor and reporter. He also worked as a reporter in Mississippi for The Clarion-Ledger in Jackson, The Sun in Gulfport and the Northeast Mississippi Daily Journal in Tupelo. His investigative teams have won more than a dozen national awards. Riley fills the role vacated by Nancy Barnes, who departed in November to become senior vice president of news for National Public Radio.

“You want the work to mean something to the people that read it, both everyday subscribers and the folks with power and influence to induce change,” Riley said. “So I’m very grateful to have been able to work in newsrooms that placed a premium on public-service journalism, deep stories that forced people to stop, think and then act. I’d like to think I’ve had some impact on the cities and states where I’ve lived and worked.”

Recently, during the Ole Miss spring semester, Riley, a graduate of Nettleton High School and one of the most distinguished graduates of the University of Mississippi, took time out of his busy schedule to speak with Journalism 102 students about the current state of a newsroom during the pandemic.

Riley talked about the transition to a more digital reporting environment in which his 200 newsroom reporters were filing stories as soon as they were complete rather than waiting for them to be printed in the paper the next day.

He also described how they moved to a more remote operation where most of the management communicates through Zoom. Even Riley lives remotely in North Carolina, and only travels to Houston when necessary.

Riley said COVID-19 has dominated the news and forced newspapers to reorganize their processes in order to cover the pandemic.

“This is a story of a generation, if not a century,” he said.

In order for the Chronicle to cover all aspects of the virus, they have had to organize their reporters to cover the Texas Medical Center, all of the different treatments for the virus, the evictions, hunger, the demise of small business and the roll out of the vaccine.

So what’s next for this accomplished journalist?

“I’d like to exhale, travel and get involved in my community a bit in ways that weren’t really possible while working as a journalist,” Riley said.

“We like to cycle, hike, and I enjoy tennis and skiing. So I don’t think I’ll get bored.”

This story was written by student Madison Malo.