Ryan Rigney, the global communications lead of the League of Legends franchise, was the first speaker of the spring semester at the University of Mississippi School of Journalism and New Media.

He addressed an audience in the Overby Center auditorium Wednesday, Jan. 29, and was also one of the featured panelists during the 2020 Jobs Conference Thursday, Jan. 30 in Farley Hall. 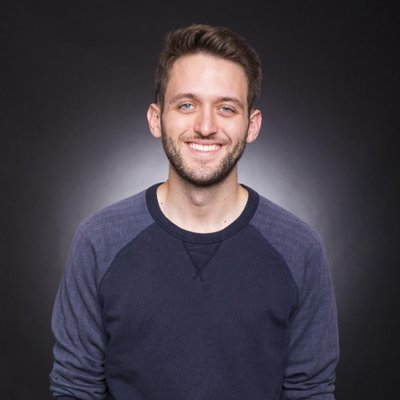 Rigney, 28, a native of Poplarville, Mississippi, about 30 minutes south of Hattiesburg, said he enrolled in the University of Mississippi in 2010 with dreams of becoming a magazine journalist.

“While still in high school, I landed some gigs writing about video games for – first – websites, and later, small-press magazines like GamePro (R.I.P.),” he said in an interview. “By the time I was in college, I’d worked my way up the ladder of the magazine world enough to write for magazines like PC Gamer, and later WIRED and EDGE.”

Rigney wrote about mobile games, which culminated in the publication of his book Buttonless about iOS games. After graduating, he moved to Los Angeles to work for a gaming-adjacent startup. About a year later, he landed his first job at Riot Games.

“The past five years have been sort of a blur since then, but over time, I basically converted from a creative/editorial writer into a communications strategist, a.k.a. a PR guy,” he said.

The League of Legends logo.

Riot Games is the developer and publisher of League of Legends, which, by player count, is the world’s most popular PC game and biggest esport, Rigney said. The company’s annual Worlds championship has drawn about 100 million unique viewers for a couple of years.

Riot Games was founded in 2006 by Brandon Beck and Marc Merrill with the intent to change the way video games are made and supported for players. In 2009, the company released its debut title League of Legends to worldwide acclaim. The game has since become the most played PC game in the world and a key driver of the explosive growth of esports. Riot Games is headquartered in Los Angeles and has 23 offices worldwide.

“We also do a bunch of insane stuff like music videos that get over 300 million views on YouTube alone,” he said. “The ‘champions’ (characters) from League appear in virtual hip hop groups, in clothing partnerships with brands like Louis Vuitton, and soon in an animated series.”

Rigney said League of Legends is mostly known as a single video game today, but within a few years, people will know it as a series of 10+ games and pop culture media that isn’t limited to any one form. 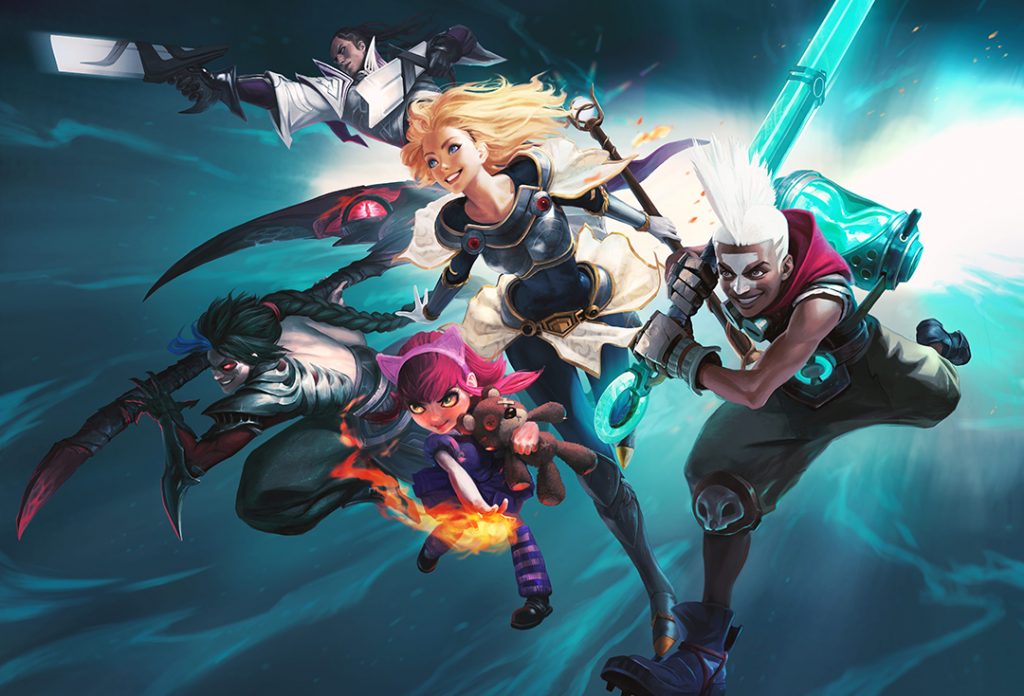 A still photo from League of Legends showing some of the characters.

“My job is global communications lead – League of Legends franchise,” he said. “On paper, I’m a people manager. I lead a team that includes our editorial lead and a quartet of senior/mid-level comms strategists who run all communications on three of Riot’s games. I operate at the ‘franchise’ level, which is just a fancy way of saying that they call me whenever we do something that covers more than one game.

“I’m a little unusual in that I also work as an individual contributor. I write a lot of Riot’s messaging directly. I act as a spokesperson for the company on social media (Reddit/Twitter especially), and I guide our overall approach to communications. Mostly, I sit in meetings and help developers figure out how to say stuff to players.”

Rigney predicts the games industry will get bigger and more ambitious. He said college students should consider pursuing it because there are more entry points and viable careers now than ever before.

Ellen Meacham, a professor with the UM School of Journalism and New Media, said Rigney arrived on campus as a student with big ideas and a lot of energy.

“He was a hard worker too,” she said. “In 2012, he won the university’s Gillespie Award for best business plan.” 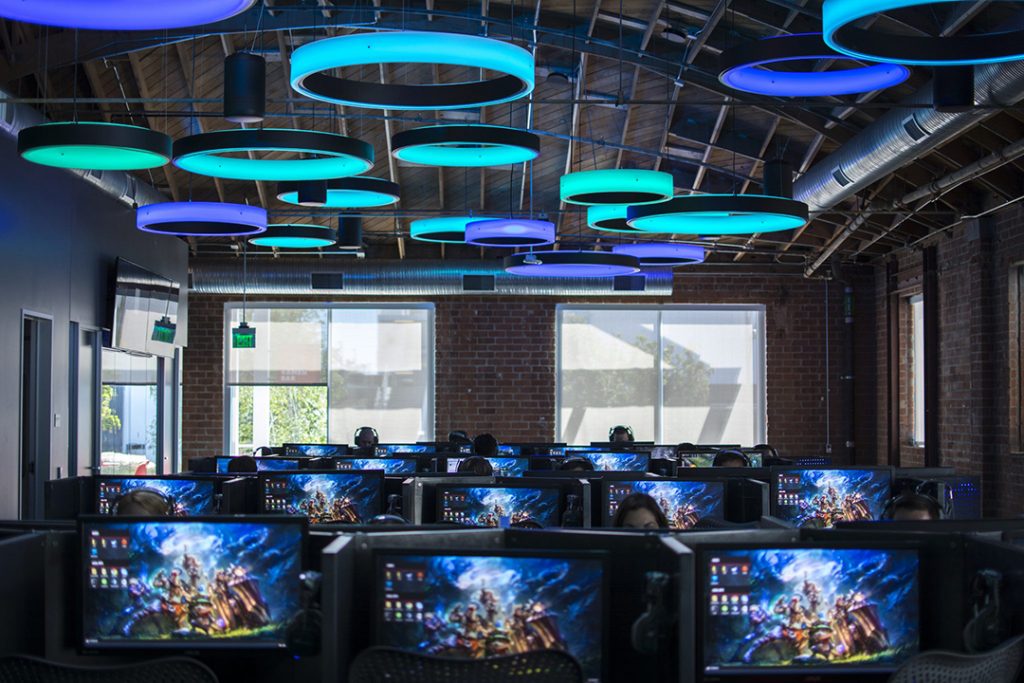 Inside the Riot Games headquarters.

Rigney, the overall Gillespie winner, was awarded $4,000 for his business plan, Utah Raptor Games. The competition is designed to foster entrepreneurship by encouraging students to develop business ideas.

“I think he will also have a lot to say about what the esports and gaming world is like now, what’s in the future, and how his work in communications will shape and be shaped by that,” she said.

Rigney said writing was one of the most valuable skills he learned at the UM School of Journalism and New Media.

“My j-school professors taught me how to write,” he said. “Which is to say, they taught me how to think clearly, and to structure information in a way that’s digestible for other people. Even though my job doesn’t match the degree I earned from Ole Miss, I think the lessons I learned about writing are 100 percent applicable to my current job.” 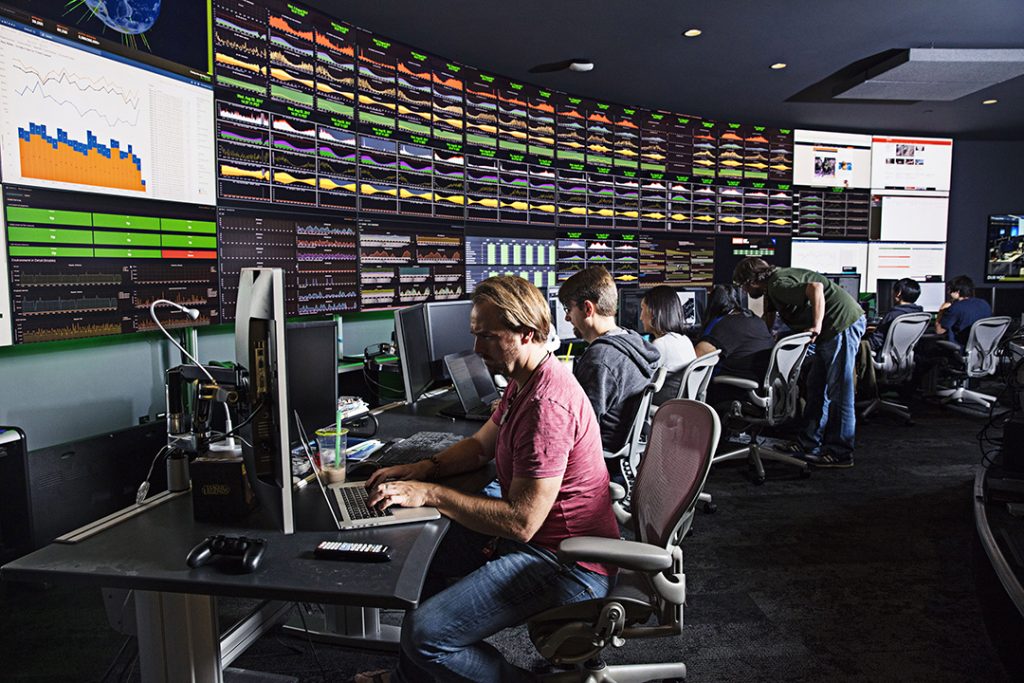 Inside the Riot Games headquarters.

Rigney also remembers the professors who encouraged him to pursue his passion.

“I don’t know what sort of encouragement the current crop of Ole Miss students need, but I’d love to listen to their questions and share what limited knowledge I have to help them along their own paths,” he said. “I think sometimes people from Mississippi don’t think they can do the sort of work that successful people in the film industry, or literature, or gaming do. It all seems very distant, when you grew up in the woods, like I did. I would love to help people understand how achievable their goals are, if they’re strategic about their career.”

He said he doesn’t believe in one-size-fits-all advice, but Rigney’s learned a few things about the business world.

“You have to ask for something if you’re going to get it,” he said. “That applies to jobs, and career opportunities, and chances to grow.”

For more information about our journalism or IMC programs visit jnm.olemiss.edu.