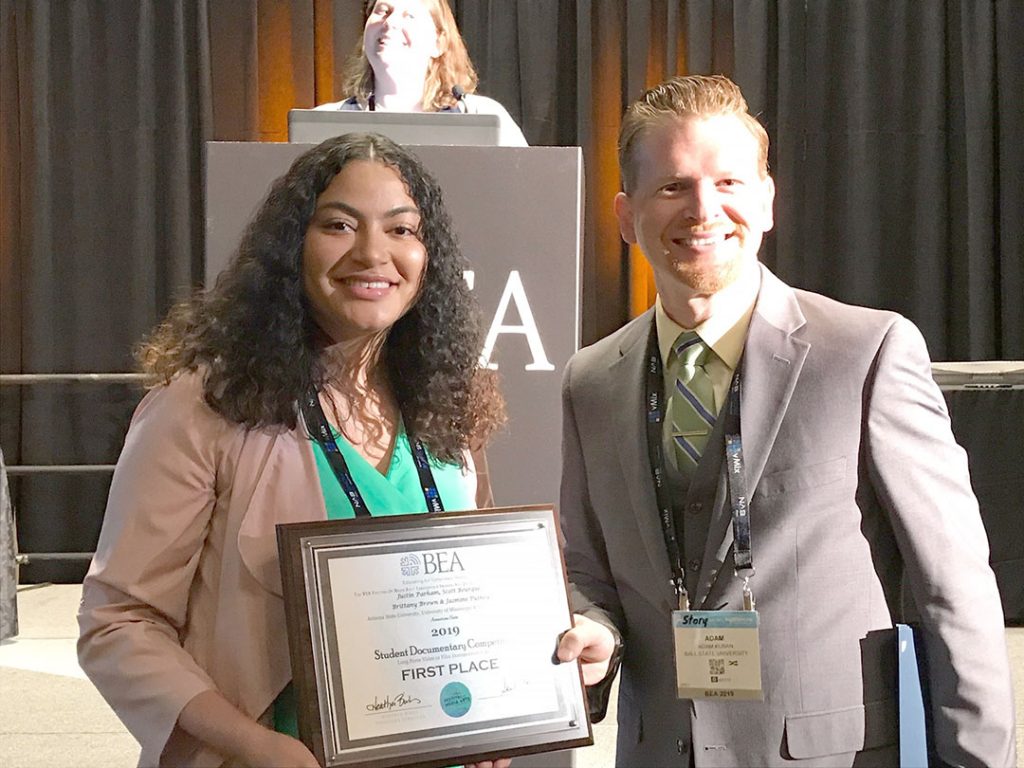 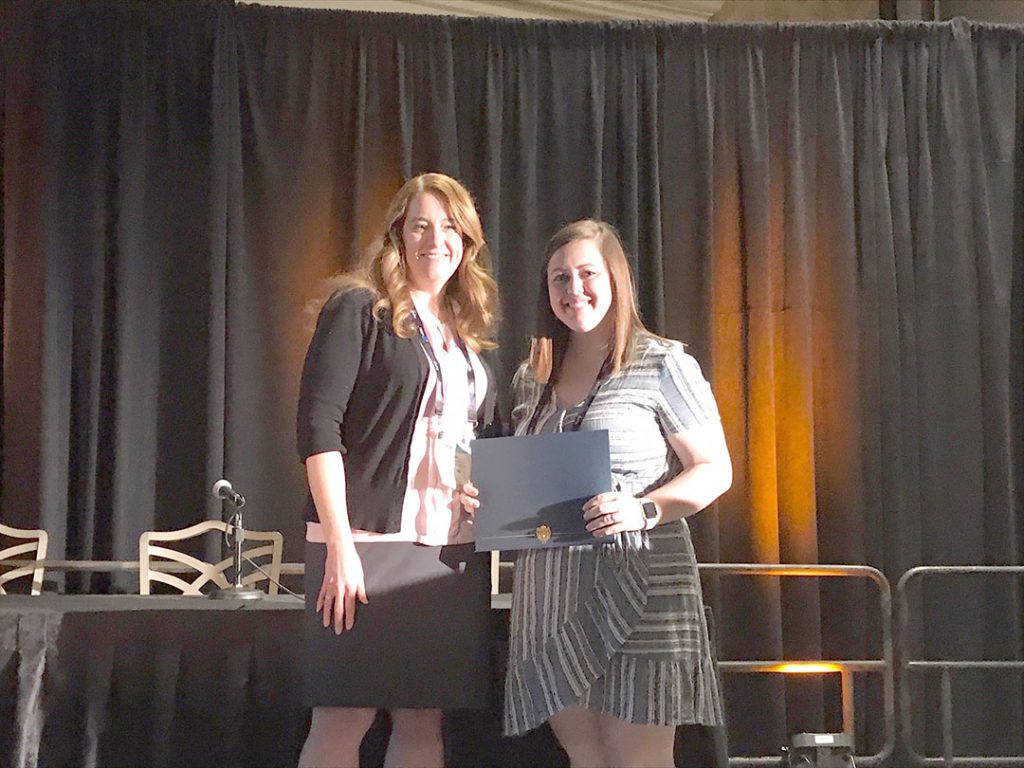 “I, honest to God, came into this talk because my teacher told me to,” Abbott said Tuesday. “I had no idea who he was. I saw the posters around class. I did not know we were coming to do this today. And when we came in and sat down, and he started telling us who he was, I was like, ‘No way. No way.’ And it just kept getting crazier and crazier.”

“This is too surreal for me,” she said, Marveling at the coincidence. “There’s no way that someone from my little nothing of a town – I mean, I graduated from a class of 40 people. He is probably the only person who understands that. I mean, nobody even knows where H.W. Byers is, so this is just crazy.”

Abbott, who plans to graduate from UM in May, also discovered she and Holland were both double majors in English and journalism.

“He is practically like related to me at this point,” she said. “I feel like he’s really an inspiration to me. We came from the same place, from the same school. We practically know all of the same people. I’m getting the same degree as him, and he’s successful.”

Holland, who has spent much of his career as an Associated Press journalist, spoke at the Meek School of Journalism and New Media Tuesday at 2 p.m. discussing his career as a journalist and nonfiction writer, his journey to writing fiction novels for two successful movie franchises, and tips for aspiring writers, including Abbott.

Holland, who grew up on a farm about 15 miles outside of Holly Springs, said he was recruited to attend UM from H.W. Byers, but college was not his first Ole Miss experience.

His mother, who was once his own English teacher at H.W. Byers, taught during the school year and spent five summers working on her master’s degree in English. While she attended classes, Holland and his older sister hung out in the campus library and took swimming lessons at Ole Miss. “So I basically grew up on campus,” he said. 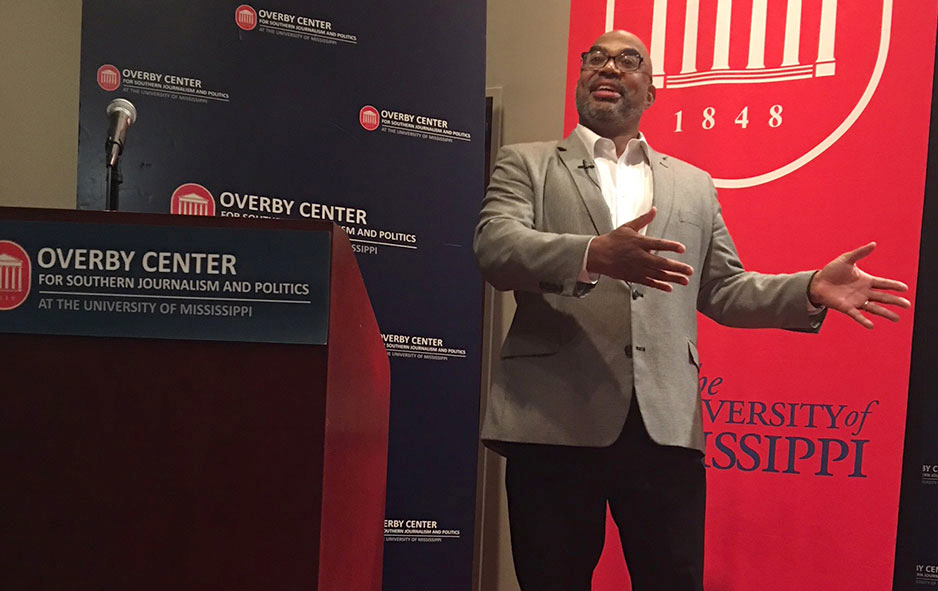 Holland later worked as editor of The Daily Mississippian, as a talk show host, and ran one of the campus TV station cameras.

“The great thing about Ole Miss for me was it allowed me to experiment and learn about all types of journalism,” he said. “I got to pick and choose which one suited me. It was the only place at that time that had a student run newspaper, TV station and radio station.”

Holland always knew he wanted to be a writer, but coming from a small Mississippi town, he said he wasn’t sure what to write about. “That’s why I got into journalism,” he said, “so I could go to interesting places, meet interesting people, do interesting things.”

Holland said UM professors emphasized the value of internships. He interned locally at The Oxford Eagle, at the Birmingham Post-Herald, with the Meredith Corporation working in the test kitchen for Better Homes & Gardens, at The New York Times, and with the Associated Press in South Carolina.

After several AP reporters quit around the same time for different reasons, Holland advanced from intern to full-time journalist after graduating from UM in 1994. He has remained with the Associated Press for almost 24 years.

His first book Black Men Built the Capitol: Discovering African-American History In and Around Washington was published in 2007. Ten years later, his second book The Invisibles: The Untold Story of African American Slaves in the White House was published.

“Part of my story is taking advantage of opportunities when they present themselves,” Holland said. “When it does, you have to grab it.”

Holland said he’s a proud “geek” who discusses science fiction on social media. That’s one reason a Lucasfilm book editor contacted him and asked him to write Finn’s Story, the backstory of one of the latest “Star Wars” characters. Holland, who has been a “Star Wars” fan since elementary school, said it was the first movie he saw in a theater.

A month after Finn’s Story came out, Holland received a call from a Marvel book editor who had read The Invisibles and asked if he had heard of “Black Panther.” Holland had been reading Black Panther, one of the first comic books he’d ever read, since he was 5 or 6.

“I’ve been following this character my entire life,” he said.

The Marvel editor, who had read Finn’s Story, asked Holland if he would be interested in writing Who Is the Black Panther?

“Would I be interested in doing it,” Holland asked, enthusiastically. “Am I supposed to be paying y’all, or are you paying me?”

Holland said his “Black Panther” book focuses on the character’s classic comic book mythology. He said the origin of the character was written in 1966 and stayed the same until Marvel hired a writer to update the origin in 2005. Holland was asked to take the 1966 and 2005 origin stories and update them for 2017.

He said the “Black Panther” book has sold out internationally. “It’s gone,” he said. “It’s been very well received by everyone, and I have been very well treated by Marvel.”

Holland, who fielded questions from the audience, said he credits his success to UM professors who told him he could do anything he wanted as long as he worked for it.

What does he do when he gets writers’ block? Holland said he rarely has that problem because he has worked as a journalist for the past two decades.

“One of the things you learn as a journalist is that you can’t afford writers’ block because a deadline is a deadline,” he said. “I think that’s one of the reasons I was chosen by Lucasfilm and Marvel, because they knew I was a journalist, and I knew deadlines.”

Holland said he had only a month to write the “Star Wars” novel. They wanted a junior novel of 20,000 words, but he turned in more than 40,000, and editors cut it. For “Black Panther,” they wanted 90,000 words in six months. Holland said he blew the deadline, turning it in one day late. He apologized for missing it.

Is it difficult to transition from writing nonfiction to fiction? “It is not as difficult as I thought it would be,” Holland said. “For years, I refused to write fiction because I actually have a master’s degree in creative nonfiction. When I started working on Finn’s Story, I discovered there was a common thread through my fiction and nonfiction. We, as journalists, are basically all historians.”

He said the “Black Panther” book didn’t require a lot of research because he had unknowingly already been doing it his entire life. He had most of the comic books in his basement. But writing Finn’s Story was different.

Holland said this required a lot of detailed, technical research.

He’s now in discussions with Marvel about another project, but he can’t announce it. He’s also writing an outline for his next nonfiction book about a village founded by freed slaves, and he’s working on an anthology of African American narrative journalism. He also predicts he’ll be writing more graphic and science fictions novels.

Holland said it’s important for students to get hands-on journalism experience, and they can do that at the University of Mississippi.

What is his biggest career triumph? “I consider the publication of the first Daily Mississippian with me being the editor as my first triumph,” he said.

But there’s another story. In 1994, the year he served as DM editor, it was the first year the student newspaper had Macintosh computers. Holland said the week before the semester began, S. Gale Denley, head of the Student Media Center, brought in eight Macs and told the DM staff they had a week to figure out how to network the computers and put out a newspaper.

“So, for seven days, we had to teach ourselves computer networking, pagination and printing in addition to writing the stories that had to be in the newspapers,” Holland said. “… That was fun, but I will admit, that was difficult. Just the fact that we were able to get it done was my greatest triumph. It’s a good example of what you can do when you don’t stop to think about why you can’t.”