University of Mississippi School of Journalism and New Media faculty members are proud to have known Harold Burson, a UM graduate who founded Burson-Marsteller, a company that grew to become the world’s largest public relations firm.

The World War II veteran was a friend and colleague to many who passed away at the age of 98. But in October, Burson visited the school to sign copies of his book The Business of Persuasion and spoke to a room of faculty and students during a presentation moderated by Senior Lecturer Robin Street, who specializes in public relations and integrated marketing communications. 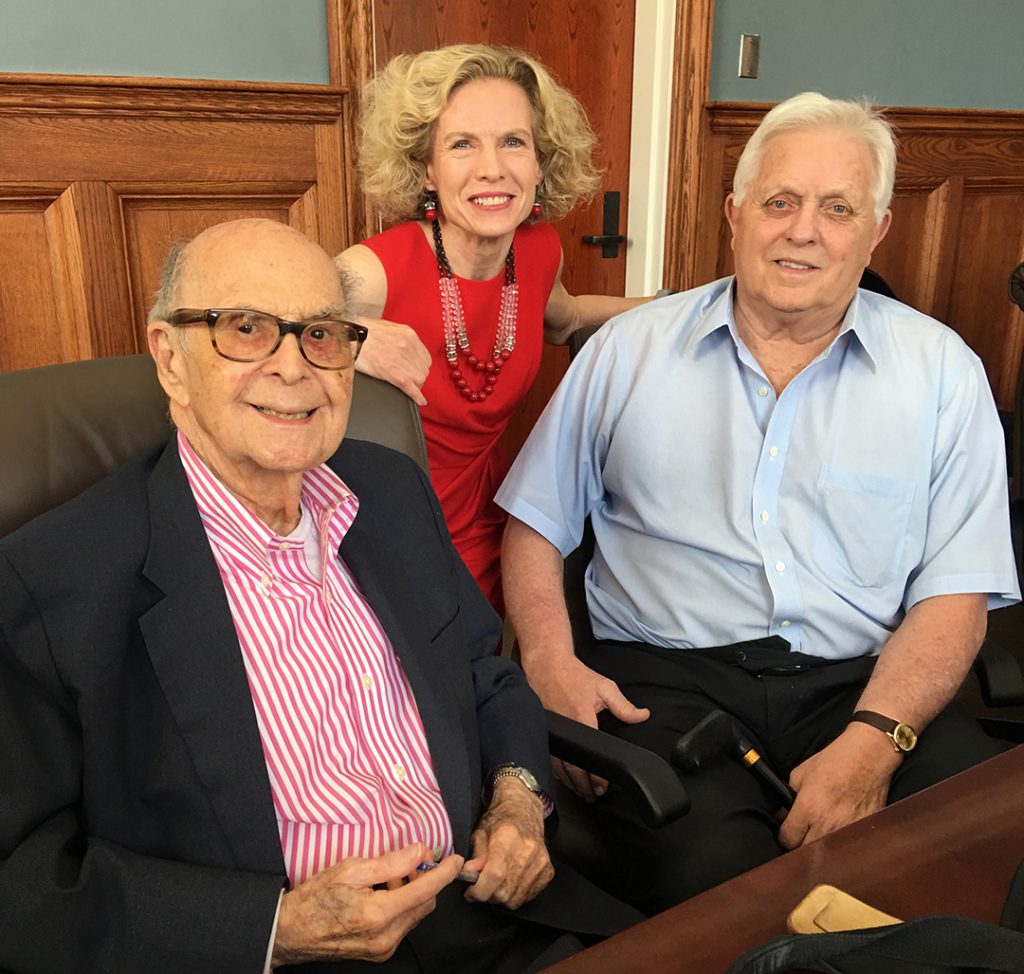 “One of the greatest joys in my teaching career was the chance to spend time with Harold Burson, and even better, to have him speak to my students several times,” Street said via email, adding that his name and significance in the PR world are among the first things she teaches her students in the Introduction to Public Relations class.

“I tell them that what Elvis Presley was to rock and roll, Burson was to PR,” she said. “He truly helped the profession evolve, change and grow. . . This man was a giant in the PR world. Yet, he was soft-spoken and humble when he spoke to students. After he spoke, he always patiently posed for photo after photo with the students.”

Burson got his start as a writer for The Daily Mississippian and later became one of the most influential public relations figures in the world. He spent more than 50 years serving CEOs, government leaders, and heads of public sector units.

This week, his life has been chronicled in national newspapers and on websites such as PR Week, The New York Times, The Washington Post and The Wall Street Journal. 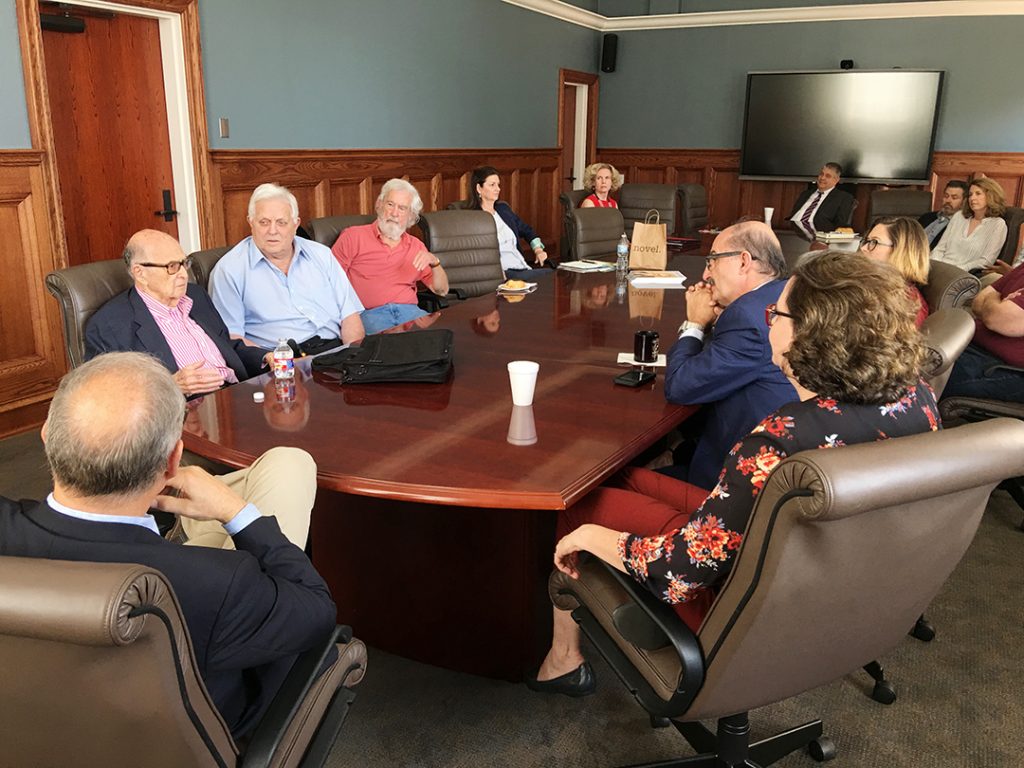 Harold Burson, former University of Mississippi Chancellor Robert Khayat, and journalists Curtis Wlkie and Peter J. Boyer were among those who attended the faculty meeting with Burson. Photo by LaReeca Rucker.

Burson, who spoke to faculty and signed copies of his book before addressing students in the Overby Center, was born in 1921. He said his father came to the United States from England and served in the British Army before establishing a career in the cotton business.

Ellen Meacham, a professor with the School of Journalism and New Media, said Burson covered the Nuremberg trials for the American Forces Network as a 24-year-old radio journalist.

“His work stands as an essential witness to both the atrocities of the Nazis and the values that the U.S. aimed to uphold,” she said. “As he spent days and days watching the documents and footage taken by the Nazi’s themselves from the concentration camps entered into evidence, it must have taken a tremendous personal emotional toll, yet his demeanor and writing remained unshakably professional.” 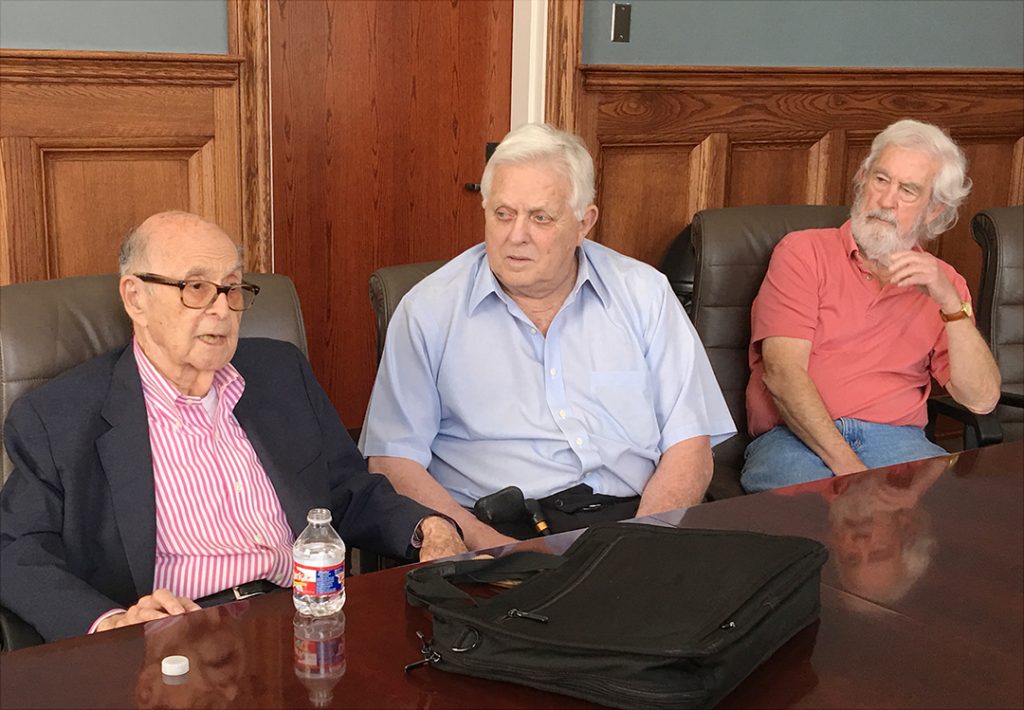 From left, Harold Burson, former University of Mississippi Chancellor Robert Khayat, and journalist Curtis Wilkie were among those who attended the faculty meeting with Burson. Photo by LaReeca Rucker.

“Tell the truth as best you can,” she said. “Tell it square, with out fear or favor. Know your audience. Help them understand what they want to know and what they need to know. Make them see, hear, and, most importantly, FEEL the story. Be the witness to history, and write its first draft. He set a great example for generations to come.” 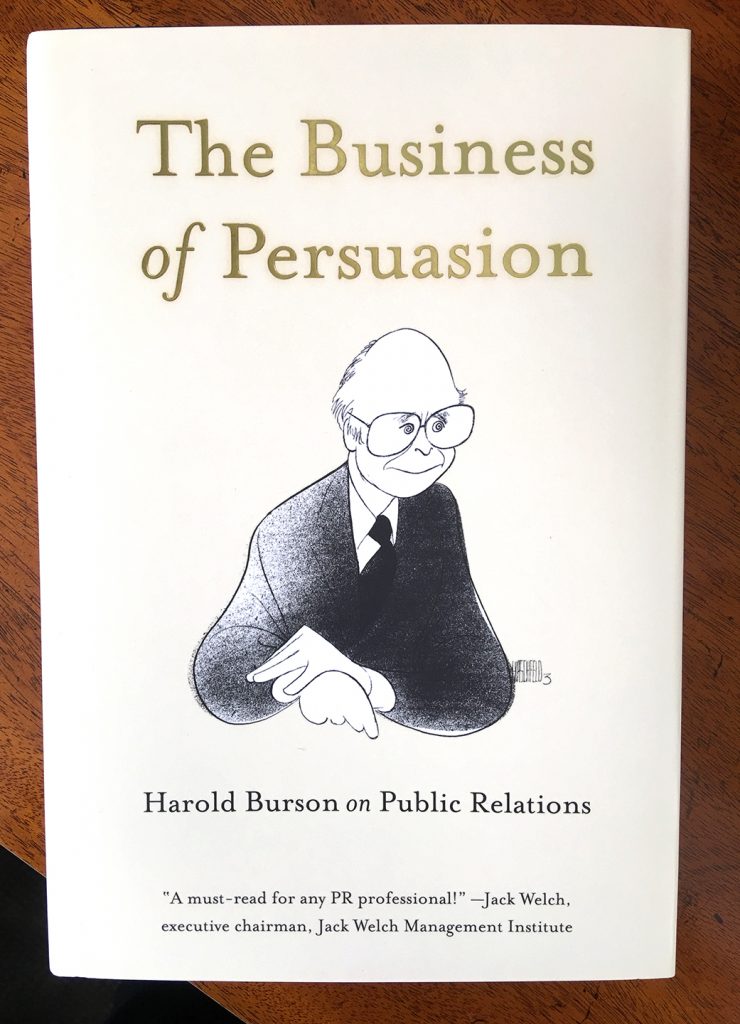 Harold Burson signed copies of his book The Business of Persuasion.

Burson told faculty during the fall that when he decided to create his own business in the 1930s, he wrote a letter to a potential businessman asking him to be his first client. The recipient agreed and found Burson an additional client. Six years later, he had a team of five employees.

Throughout his career, he has worked on many important projects at the local, state, and federal level.

One of his most high profile PR cases happened in the 1980s when he was hired by the company Johnson & Johnson after news broke that several people had died after bottles of Tylenol were found to have been tainted by cyanide.

Burson discussed the case in the Overby Center, explaining that it was not just a threat to the pharmaceutical industry; it was also dangerous for the entire food industry whose products could be easily penetrated with needles, etc.

Street said she has taught about this classic crisis case for years, but didn’t know Burson was the PR expert helping with it until he casually mentioned it one day.

“The last time he spoke was in October, and he held the rapt attention of a room full of college students,” she said. “That is something even few professors can do.”

Although she met him only a few times, Meacham said Burson made a deep impression.

“He had an intense focus, on you, on the business at hand, and on the larger context,” she said. “He seemed to notice everything and remember every detail. He was a great storyteller, too, which is what made him, early on, a good reporter and, later on, a public relations visionary.”

Will Norton Jr., dean of the School of Journalism and New Media, described Burson as a quiet man who was incredibly insightful about human nature. He was a man of integrity who wasn’t afraid of anything, he said.

“His company created integrated marketing communications,” he said. “The IMC field is his legacy to our world.”

In lieu of flowers, the family has asked that those who wish to celebrate Burson’s life and lessons to make a donation to the Harold Burson Legacy Scholarship Fund at the School of Journalism and New Media at the University of Mississippi.

Friends and colleagues are invited to leave a comment, an anecdote or a note of remembrance at the following email: mmburson99@gmail.com.