Ro Rhodes talks about her future with an inspiring brand of confidence that makes you believe she will succeed no matter what life throws at her.

The University of Mississippi master’s student in integrated marketing communications recently was named a Forbes 30 Under 30 scholar and invited to the Forbes Under 30 Summit. The elite program, held Oct. 27-30 in Detroit, included a star-studded speaker’s roll with tennis star Serena Williams, NBA star Kevin Durant, actress Olivia Munn, rapper 21 Savage and many more.

“To see other people who are just as eager and excited about what they are working in, and relate my story to them, was really cool,” Rhodes said. “A big takeaway was that you’re not the only one, so you need to be constantly working because there are other people all around the country trying to do whatever you’re doing.” 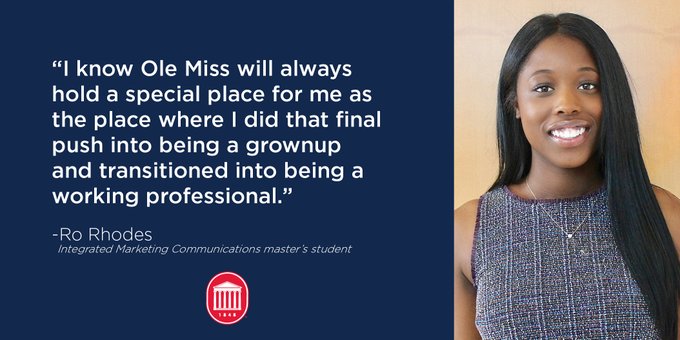 Rhodes noticed that many presenters and people she met had different stories and pathways to their success, which helped her understand more about what goes into climbing to the top.

“There are multiple ways to get to the end, but really seeing how many different paths you can take and still be someone in their field to look up to and appreciate is really cool,” Rhodes said. “It was just a really good experience to be around people like that.”

“This program is designed to increase diversity and give entrepreneurial-minded, high-achieving students low-cost access to four days of programming that will help them think more broadly about social, economic and geopolitical issues impacting our world today,” Brusca said.

Rhodes, a Jersey City, New Jersey native, already has completed internships with the NFL and the NBA, and she dreams of being head of marketing for an NBA team one day.

She works as a graduate assistant in the UM Department of Intercollegiate Athletics. She deals mainly with the fan experience, helping shape the atmosphere at Ole Miss sporting events.

She believes the specialty will continue to grow, as venues find ways to compete with high-definition TV and the comfort of home to try to get people in the seats.

“I once realized none of my favorite sports experiences have been on the couch; they have always been there in the crowd and on the court,” Rhodes said.

Jason List, associate athletics director for marketing and fan experience, who supervises Rhodes, said what she brings to the team is not measurable.

“She’s the person you go to when you know something is going to be seen by 60,000 people and it has to be perfect,” List said. “But her contagious personality is her best quality. She makes the people around her better. You don’t find all that in a person her age very often.”

She earned a bachelor’s degree from the University of Kentucky, where her dad, Rodrick Rhodes, was a basketball standout before transferring to the University of Southern California. He was selected by the Houston Rockets in the first round of the 1997 NBA draft, and his career also included stops with the Vancouver Grizzlies and the Dallas Mavericks.

Her father has been a huge influence on Rhodes’ life, but she doesn’t drop his name to get ahead. She worked at Ole Miss for seven months before one of her coworkers even found out that her dad played for the Grizzlies, his favorite NBA team.

“I’ve just never wanted anyone to think I got to where I am because of who he is,” she said. “I have done a great job of making my own pathway, but if it comes up, it fits in the story, but I try not to lead with that because I just want people to know I put in the hard work to get to where I am.”

Rodrick Rhodes’ relentless focus on pursuing his NBA dream is an inspiration to his daughter, she said. She realized her dad accomplished something only a tiny percentage of the population ever does – getting to play professional sports. Her mother, Sharnese Johnson, also taught her persistence and how to constantly try to get better, Rhodes said.

Though her dad’s shadow is large at Kentucky, Rhodes loved working there. And while she hails from the Garden State, she fits in around Southerners, she said. She knew when she was searching for graduate assistantships that she wanted to stay in the Southeastern Conference.

“I realized that Kentucky and Ole Miss have different traditions, but they definitely value tradition as a whole,” Rhodes said. “It is something that they hold dear.

“So when I found that out and did a little more research, it just kind of felt natural to come to Ole Miss. It all just flowed. I just knew this was the next step.”

She’s found her classes rewarding, as well as being at the table during meetings in athletics and seeing how decisions are made, why they are made and how they are carried out, she said. She is on track to graduate with her master’s degree in May.

Ole Miss has prepared her well for her career path, she said.

“I have had a great time at the university, and I’m sad that it’s drawing to a close, but I know that once you’re here, you’re always welcomed back,” Rhodes said. “I know Ole Miss will always hold a special place for me as the place where I did that final push into being a grownup and transitioned into being a working professional.

“Ole Miss has given me the tools to make that transition gracefully.”

This story was written by Michael Newsom of University Communications.