Journalist Peter J. Boyer returns to Ole Miss to teach class about Trump and the media

A former University of Mississippi student with a lengthy career in national news is teaching a class in the Sally McDonnell Barksdale Honors College for the UM School of Journalism and New Media about the president’s relationship with the media.

“It’s not a journalism course, in any traditional sense, but, rather, a consideration of the effects that our fractured political moment has upon the flow of information from our mainstream news sources,” he said. “President Trump’s ceaseless jousting with what he calls the ‘fake news’ has plainly jarred the news media. The question is, has it changed the nature, and the quality, of the news product?” 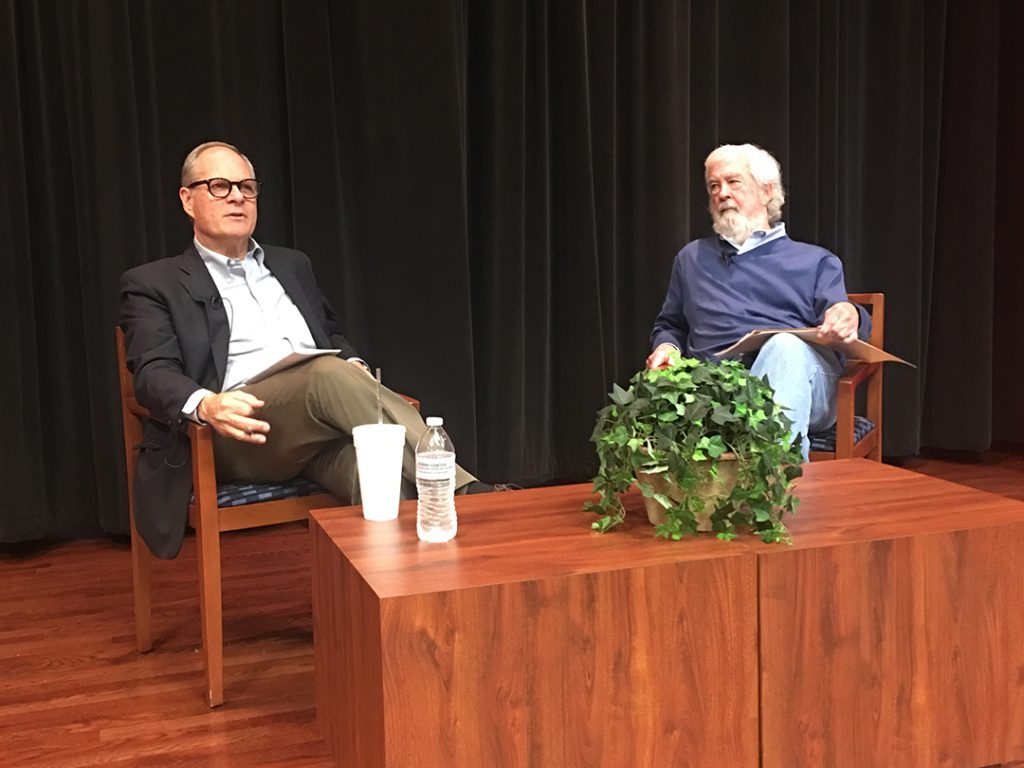 Boyer is a writer and producer whose narrative journalism has served as the basis of award-winning documentaries and has appeared in some of the country’s most highly regarded publications. He spent 18 years as a staff writer at The New Yorker magazine, where he reported on a wide range of subjects, including politics, the military, religion and sports.

As a correspondent for the PBS documentary series Frontline, Boyer helped turn several of his longform articles into documentaries as well as contribute to several original films. His work at Frontline won a George Foster Peabody Award and an Emmy, as well as consecutive Writers Guild Awards for scriptwriting.

“When Dean Will Norton and the Honors College asked me to teach a course this fall with Curtis Wilkie, I didn’t hesitate to accept,” he said. “Curtis is a treasure, one of the great journalists of our time, a true witness to history, and (as I’d observed in past visits to his classes) a generous and passionate teacher.

“I often tell our students that they are the thought leaders of tomorrow, and that the one thing I hope they take away from our class is the importance of being able to step back from the daily torrent of information, and to judge for themselves what agendas are at play. Turns out, the students are quite good at that — as they’ll need to be, as the media landscape becomes ever more fractured.”

Debora Wenger, UM School of Journalism and New Media assistant dean for innovation and external partnerships and professor of journalism, said the school’s partnership with the Honors College has allowed the school to entice amazing journalists and media practitioners to teach here, including Mr. Boyer.

“With Boyer and Wilkie as their guides, students are exploring the ways in which news organizations are covering a president who regularly calls journalists ‘enemies of the people,’” she said. “They’re taking a hard look at whether the media’s response has been appropriate and what this all means for our country.”

Boyer started his career with the Associated Press in Los Angeles, before becoming a national correspondent for the Los Angeles Times, the media reporter for the New York Times, a contributing editor at Vanity Fair, and a television critic for National Public Radio’s “Morning Edition.”

“For me, someone who loves politics and journalism and history, the classes are just great fun. And, I’m still crazy about Ole Miss (as a fellow would have to be, living in New York for 35 years and remaining an Ole Miss football season holder). It truly is a special place.”

“Apart from its singular physical beauty and congenial culture, the thing I’d noticed at Ole Miss in recent years is the palpable energy the community brings to the mission,” he said. “The teachers really want to teach, and the kids I’ve met really want to learn.

“And those students are as bright and as interesting as any I’ve met. Our class had a session recently with Jill Abramson, the first executive editor of the New York Times, and our students were as engaged (or more so) as any Jill encounters at her regular classes at Harvard. It was very satisfying.

“So, that’s why I came back to Ole Miss. That, and the bacon and grits at BBB.”

Boyer attended the University of Mississippi before graduating from UCLA. His post-graduate studies were done at the USC School of Journalism. He lives in Ossining, NY, with his wife, Kari Granville.