A former editor of The Daily Mississippian has been featured in the fourth season of the television series “Death Row Stories” that airs on HLN. Lyndy Berryhill, who graduated from the University of Mississippi School of Journalism and New Media in 2018, talked with us about the experience.

Q. Can you tell me a little about yourself, what you studied, and when you were a student at UM?

I grew up in rural Southwest Mississippi and graduated from the School of Journalism and New Media in 2018. I have been a working journalist since age 19. I have written and edited for more than 10 community newspapers and served as editor-in-chief of The Daily Mississippian. I currently live north of Gulfport and freelance for local newspapers and magazines. I have written and reported on four continents. I most recently worked as an investigative reporter for CNN’s “Death Row Stories,” and I was an undercover journalist for a documentary series which airs on BBC’s Channel Four. 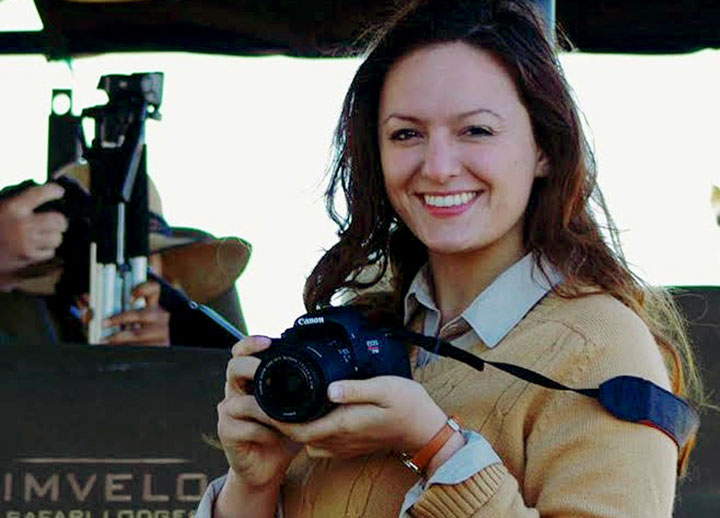 Q. When did you learn about this opportunity?

I heard about the opportunity through a fellow Mississippi-based journalist, Jerry Mitchell. I actually met him several years ago when Ole Miss hosted a journalism conference where he spoke at the banquet. I had read his work beforehand and was a little starstruck. I introduced myself and stayed in contact. He recommended me for the job, and I applied.

Q. What was your assignment? Tell me a little about the work you did.

I was assigned to do some investigative field work. Since both of the Mississippi cases they were looking at were around 20 years old, the original people involved were hard to track down. People had died, moved away, or changed their names in some cases, so Jigsaw was looking for someone who knew the state and knew enough people to get in touch with former attorneys, judges, law enforcement officers, family members and witnesses. The main goal for me was to provide updated contact information, so the production crew could put together an episode.

I was nervous when I first got the job because I am experienced with print. Luckily, the investigative skills are the same whether it is for print or video. I spent hours in libraries, pouring over public records and old newspaper clippings trying to find answers. When Google and old phonebooks failed, a couple of times I had to walk door-to-door at old addresses and ask the current tenants questions. Additionally, I also spent a lot of time collecting and digitalizing court records, newspaper articles and evidence files.

Once I gathered all material possible, the production company was given the green light to film each episode. When the crew came to film, I also served as the production assistant on set. I helped location scout, got coffee, and picked up lunch.

Q. What is the name of the show? When does it air/aired? What is it about? What can viewers expect to see regarding your work?

The show is “Death Row Stories” and it is produced by Jigsaw Productions. It airs on CNN or HLN. This is the 4th season.

As far as what you will see, all if not most of the archival images, newspaper clippings and court documents were gathered and digitized by me. In the Marlon Howell episode, I digitized a VHS tape for the first (and hopefully only) time. That was probably the most challenging task. All of the records were public, but you were not allowed to remove any files from the courthouse. Additionally, many of the interview subjects were individuals I located and connected to the production company.

Here is a link about the series and I have copied the descriptions and airing dates of both episodes I worked on.

June 9, 2019 “Web of Lies” – The shooting of a newspaper carrier in rural Mississippi lands 20-year-old Marlon Howell on death row. Convicted on the word of two co-defendants and the identification of an eyewitness with a checkered past, Marlon maintains his innocence.

June 23, 2019 “A Woman Wronged” – A man is found dead in his rural Mississippi home, shot four times with his own pistol. His 19-year-old son names his hospitalized mother, Michelle Byrom, as the mastermind of the murder, claiming she hired the boy’s friend to shoot her husband, and promised to pay him from the life insurance payout. Sentenced to death, Michelle spends 14 years awaiting execution — until a team of lawyers reexamine her case.

Q. What advice do you give journalism students, journalists and freelancers?

I always took the hardest teachers I could at Ole Miss, and it continues to pay dividends. I came away with more than a piece of paper when I graduated because of the quality of instruction I was able to study under in the journalism school.

To freelancers, I would like to give them a hug. If you know a freelancer, they need it. It is not easy being entirely independent, and it takes twice the work to line up features and projects that are worthwhile. In general, I try to take every writing opportunity I can if it fits in my schedule. At first, I took writing jobs even when they were low-paying, which is not ideal. But because I stuck with it and continued writing, those small jobs have actually helped me garner larger, better paying gigs.