The award was presented during the advisers Saturday luncheon at the annual SIPA convention March 2-4.

“He is an encourager of others, loves students and works well with both students and adults,” Beth Fitts, former MSPA director, said. “At the same time, he is a self-starter who gets things done – all with great flair and an engaging sense of humor.” 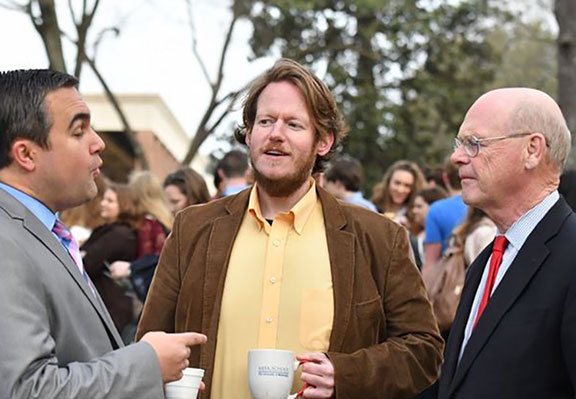 R.J. Morgan, center, during the recent Mississippi Scholastic Press Association annual conference at the Meek School of Journalism and New Media at the University of Mississippi.

Morgan is recognized for going above and beyond to get students the education and opportunities they need to grow as journalists and people. But what really sets him apart is his availability and his dedication to the students. Whether it be answering a text message or an email about a small question or renting buses to ensure students have the opportunity to make it to the SIPA conventions, he is always around for help.

“He frequently goes above and beyond his normal director duties,” Diala Chaney, Oxford High School journalism adviser, said. “He stays in constant communication with the journalism teachers throughout the state. He makes all the arrangements, travel plans and only collects a portion of the cost from the students who are interested in attending [the SIPA convention].”

“Because of the opportunities that R.J. creates through MSPA, my students have built impressive resumes filled with speaking engagements and awards. He truly believes that scholastic journalism should be student led, so my students have presented at our state conferences and have had the opportunity to submit work and win awards in the numerous competitions that he readily advertises.  He encourages them to think outside of the box and makes himself available whenever they need him. My broadcast group has even asked him to come down here to be a featured guest on their weekly podcast.”

This award is presented at the Southern Interscholastic Press Association’s annual convention the first weekend each March. The recipient usually has at least seven years of experience advising one or more award-winning school publications. He/she also has an influence in scholastic journalism beyond the walls of the school in state, regional and national scholastic press associations and shows leadership at SIPA conventions.

For more information contact Leslie Dennis at 803-777-6146 or read the full article online.

The Southern Interscholastic Press Association is a not-for-profit organization of public schools, including middle, junior and senior high schools, and independent schools. Its purpose is to encourage a high degree of professionalism in scholastic journalism and mass communications in the Southeast. Founded at Washington and Lee University in 1926, SIPA moved to the University of South Carolina in 1972.