I arrived at Ole Miss in the fall of 1975 with high expectations as I entered the Pre-Med curriculum.

It took only one semester for me to turn the rudder in another direction (I still don’t understand the difference between Meiosis and Mitosis). But once I returned from Christmas to find out that 85 percent of my class had failed, the “C” that I earned didn’t look as bad as I first thought.

Having received an English scholarship for some articles I had written in high school, I turned my interest to Journalism.

I was shocked when I was expected to turn in “three stories a week” to The Daily Mississippian. There were many days after I graduated that I wrote five articles in a day. 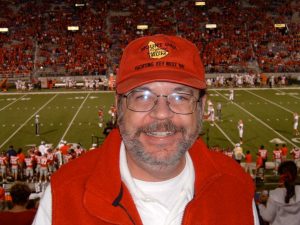 I was among the lucky ones, as I was offered a job during Christmas of my senior year to work in Pascagoula, at my hometown newspaper: The Mississippi Press. I would stay there for 19 years, the majority in sports but the final two years as Managing Editor. In that time, I remembered covering the Super Bowl in New Orleans one day and a junior high basketball tournament the next.

By this time I had fallen in love, and followed my fiancée to Birmingham. One of the two daily papers at that time was a fellow Newhouse publication, and I was able to transfer in 1998. We remained there until 2003, when I was allowed to transfer to Mobile because of my mother’s health. So until 2012, I had worked 33 years for the same company.

Then we saw the report about the Times-Picayune being gutted. We knew immediately all the Newhouse papers in Alabama and Mississippi would follow. I was prepared to return to my reporting duties, but even those positions were soon gone.

I was given 11 months of severance. I thought this would give me plenty of time to find a job. Several friends were surprised that I was staying in Mobile, because all I had ever done was work for a daily newspaper. Since moving back to the Gulf Coast, I had purchased a house and had fallen in love with my new town.

Then reality sunk in for a 55-year-old job seeker. In the first nine months, I applied for 100 jobs. The few interviews I received said the same thing: “overqualified.” I then read an article on Linked In about this same situation and what to do.

Next up was an interview to be a secretary for the Mobile County Health Department. Once I got seated, they said I had a great résumé but was “overqualified.” Because of the article, I quickly responded with “Thank You!” They were stunned, but I continued. “This is a government job with a fixed pay scale? There is no negotiating salary? So don’t you want the most overqualified person you can get?”

The next day they called and offered the job. I was completely bored 50 percent of the time, but I was paying my mortgage. I quickly learned to beg people for extra work, which they were happy to provide.

I did take a promotion to serve as Grant Writer, but it was a disaster. The technical aspects of the job were something that I failed to grasp. The job was vital, since our health department is independent and receives no tax funding. After one year, I resigned the post and went back into the secretarial pool.

Then a former Press-Register colleague left as Public Information Officer for another entity. The administrators were desperate to complete the daily duties. I began to “volunteer” and was soon the de facto PIO. When the job officially was opened to candidates, I still had to apply through the county’s Personnel Board and go through the interview process.

Thanks to my months of filling in as a temp, I already had my foot in the door. But it wasn’t until they told me in person of their final decision that I could breathe again.

I have certainly enjoyed the job. They all laughed when I told them I actually started at Ole Miss in Pre-Med, but the labs kept me from getting a good seat for happy hour at The Gin. MCHD serves an important role in the community, and just celebrated its bicentennial in 2016.

On the side, I have kept busy writing a sports column for a weekly newspaper in Mobile called “Lagniappe.” It is a French term for “a little something extra.” I joke that MCHD pays my mortgage while Lagniappe covers my bar tab. When I told this to one of the paper’s owners, their response was that they were obviously paying me too much.

As for my personal life, I am happily married with no children. This Fourth of July will mark 30 years since I met my Donna, but we did not get married until 1999. She actually proposed to me at a Valentine’s Day dinner.

If you remember Mike Wixon, he still lives in Pascagoula. He left the newspaper world many years ago, and has been involved with real estate. He is a very happy grandpa who rides his bike (his bad back from basketball won’t allow him to play golf anymore).

I was on the Ole Miss campus last week. I have been telling people I felt like I was at Epcot because it was all too perfect.

If you would like to see some of my sports writing, please visit http://lagniappemobile.com/category/style/sports/

As for my “real” job, we just uploaded our 2016 Annual Report to http://mchd.org/General/Bulk_Documents.aspx?type=Annual%20Report&index=1&subindex=1