From Doughboys to Digital

My Career Since Ole Miss 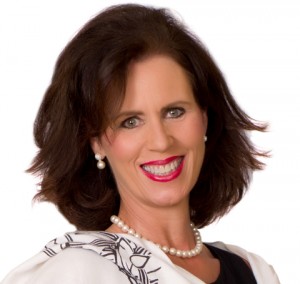 Although I hoped that one day I would return to Mississippi, when I graduated from Ole Miss in 1982, I wanted to go away for a while. I loved my school and my state almost too much, and I needed to get some perspective. My professors and mentors told me there was no limit to what I could do, so with my degree in Journalism/PR, minors in Art and University Scholars and Hall of Fame credentials, I set out on a journey through Texas, Colorado, Connecticut, and finally Minnesota before settling back in Biloxi, Mississippi.

Each step forward was made possible with key skills I learned at Ole Miss — the ability to process and synthesize information into clear, concise thoughts, ideas and communications being the most valuable. The grind of churning out papers and press releases, producing and collaborating on projects and writing stories for the DM had all been worth it after all.

I was wisely advised to look at all job opportunities, not just typical jobs in my major, because my skills would translate into just about any company. So, I took a job in sales with Pillsbury in Dallas, Texas, in which my days were spent in my company car (a Chevy Citation dubbed the “dough-mobile” by my friends) calling on 139 grocery stores and convincing store managers to give my products more exposure. I prepared pitches, created homemade flyers and made colorful presentations to creatively make my case with store managers. I was determined to be the best sales merchandiser Pillsbury had ever had. 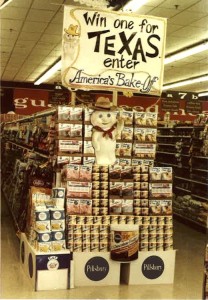 Example of Pillsbury cake mix display customized by Allison for one of her stores in Texas.

It worked. Within six months I was promoted to a Pillsbury Account Manager in Houston, calling on a tough Safeway headquarters buyer whom I was told “chewed salespeople up and spit them out.” We got along famously, and I was named “Sales Merchandiser of the Year” and “Top Account Manager” in the region.

I had loved using the new “word processing machines” at the Daily Mississippian, and since college I had longed to once again be able to get words and thoughts quickly out of my head and onto paper. So when the first Macintosh (128K) was introduced in a Super Bowl ad, I bought one the very next day. I created newsletters and flyers for other sales merchandisers. I became my own communications machine, providing tools to Pillsbury reps in a position to help my products sell at the Safeway store level.

That worked, too. “Assistant to the Region Manager” was added to my job — all for the same salary (but oh well, I was getting experience!) Many newsletters and flyers later, after a year holding two jobs, I traded grocery stores for cleanrooms and took a job as a salesperson covering seven states out of Denver, Colorado, for a company called Berkshire Corporation selling lint-free cleaning products. Once again, my ability to process information into clear ideas and communications translated into record sales and recognition for creating my own innovative marketing materials. I was promoted to Marketing Communications Director at Berkshire’s New England headquarters. Who better to come up with new brochures and marketing materials than a Journalism/PR major who’s been talking directly to customers? 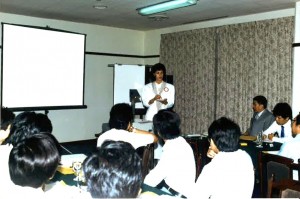 Allison conducting a training session with Taiwanese engineers in Kaoshung in 1986 for Berkshire.

With Berkshire, the adventure continued through several promotions. I became National Director of Sales and Marketing and oversaw sales, developed marketing brochures, programs, strategies, videos, packaging and presentations and traveled all over the U.S., as well as to Taiwan, Hong Kong, Zurich and London.

After four years at Berkshire, I joined Ecolab, a Fortune 500 company in St. Paul, Minnesota, and the world’s largest provider of cleaning products for restaurants and hotels. I interviewed for a Marketing Communications position and walked out of the chairman’s office as a Product Line Manager (I think it was because he asked me if I knew what a surfactant was, and I did!) As a Product Line Manager, I had P&L responsibility for a $55 million dollar line of specialty cleaning products. It was like my own business within the multi-billion dollar company … making decisions, doing product branding, creating brochures, newsletters, marketing programs, managing inventory, deleting obsolete products and developing new products.

My crowning achievement there was to develop a completely new product line for hotels and restaurants that we named Oasis®. I had been challenged by the chairman to “fix” that product area, so I went out into to the field (the answers always come from the field), formed a cross-departmental team and developed a new system from scratch with all new molds, dispensing, color coding and nine new product formulations in just nine months. I even wrote a rap song for the launch meetings to get the 3,500 salespeople excited. It was a huge success, and Oasis® cleaning products can still be found on hotel housekeeping carts around the world.

After the Oasis® nationwide launch, I came home to Pascagoula for a brief break and met my husband, Pat Buchanan. We began dating long distance, and a few months later I gave notice and moved back to Mississippi after having been away for nine years. As I drove home from St. Paul, Pat, an Ole Miss law graduate himself, met me in Oxford so he could accompany me the rest of the way to the Coast. We went for a walk in the Grove, and he proposed.

Back in Biloxi, I started Buchanan Group, a marketing communications and consulting business whose primary client was Ecolab. We raised two children — Hawtin, who is a senior Broadcast Journalism major who played baseball for Ole Miss and was drafted by the Seattle Mariners last June, and Frances, who is a sophomore at Ole Miss with a double major in IMC and Business and in the Honors College.

About four years ago, I joined The Focus Group in Gulfport, Mississippi, as its General Manager. It was a small, start-up, full-service advertising and PR agency that needed a leader. As a young agency with an incredible core of talented individuals, we were not bound by conventional ways, and we embraced an integrated communications approach that blended digital and new media with the traditional.

Those Ole Miss Journalism-inspired abilities to process and synthesize information into clear, concise thoughts, ideas and communications continue to pay dividends. Blending these skills with creativity and strategic thinking across an ever-evolving new media landscape, The Focus Group has grown to be one of the largest, most progressive agencies in Mississippi.