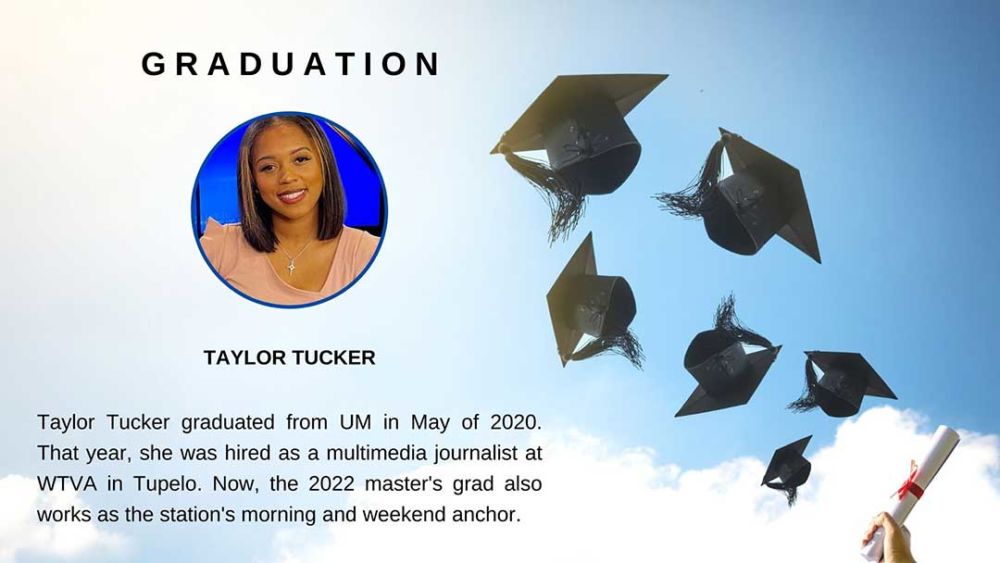 Taylor Tucker graduated from UM in May of 2020. That year, she was hired as a multimedia journalist at WTVA in Tupelo. Now, the 2022 master’s grad also works as the station’s morning and weekend anchor.”

Taylor Tucker graduated from the University of Mississippi School of Journalism and New Media in May of 2020. That year, she was hired as a multimedia journalist at WTVA in Tupelo and received a promotion her first year. Now earning her graduate degree, the 2022 grad also works as the morning and weekend anchor on WTVA from 5 a.m. until 7 a.m.

“News has earned my heart,” Tucker said, “and I plan to continue my journey as a news anchor and reporter. It’s comforting to know I now have my master’s and plan to utilize it later in my career.”

Tucker is just one of the school’s 2022 graduates who shared her Journey to Commencement.

Interim Dean Debora Wenger said one of the things that stands out about Tucker is her kindness.

“As a journalist, I know she will tell stories with compassion and care,” she said.

Wenger said Tucker is also one of the students who loves learning.

“She took advantage of opportunities to build her skills in the classroom and in the newsroom,” she said. “While still in graduate school, she started working as a reporter for WTVA in Tupelo, and the combination of professional experience and a master’s degree is going to take her far.”

The University of Mississippi School of Journalism and New Media has forged relationships with news directors across the state and around the region.

“When the folks at WTVA met Taylor, the saw huge potential and offered her a position,” Wenger said.

Tucker’s advice to fellow students: Take advantage of every opportunity. Don’t be afraid to ask for help to better perfect your craft.”

Read a previous story we wrote about Taylor below. 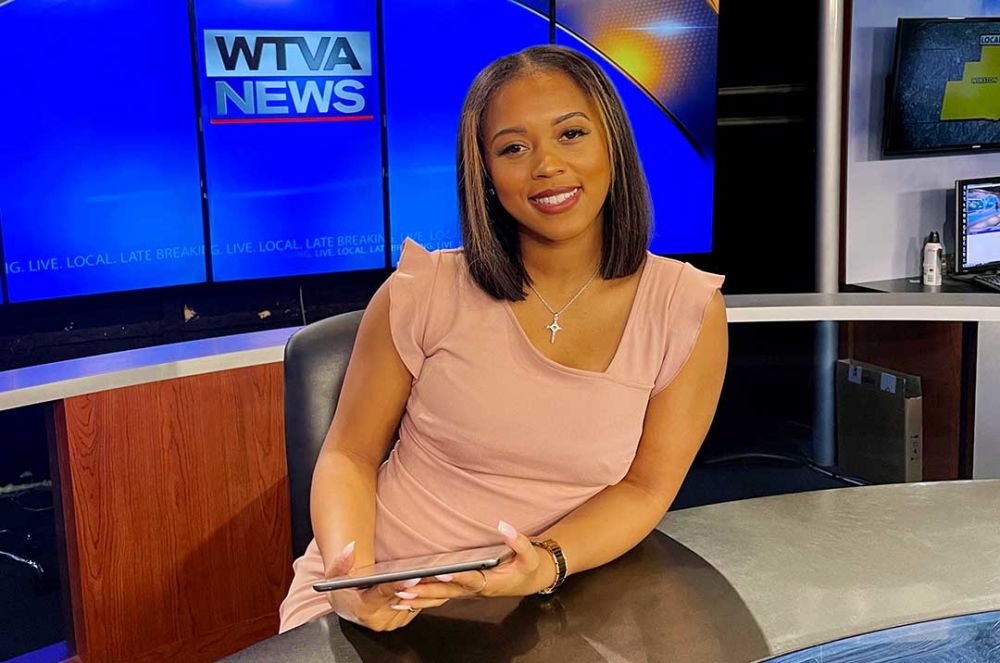 When interning as a freshman, Tucker said she felt as if she was not in the right career field because she didn’t know much about news stations and reporting in general and she was intimidated by the people who were already on the job.

“They were so much more advanced,” she said.

This made her feel behind and not in the right field. As a freshman, she became discouraged until she realized she was just getting started and still had more work to do.

When Tucker became a junior at UM, she received another internship. She knew what to expect and felt more confident because she realized she would learn as she goes.

While Tucker encountered some difficulties as an undergraduate on the road to becoming a journalist, she has also faced challenges as a young professional. One such challenge involved a February snowstorm.

It was Tucker’s first time reporting in those weather conditions. She had to drive on the roads and was afraid of what might happen. However, she managed to overcome that fear and get the job done.

“You never know what you are getting yourself into,” she said.

Each day, her job is different.  Tucker said she has to be mentally prepared because some days are challenging, but she wouldn’t want to do anything else.

DeAndria Turner, friend and former classmate of Tucker, graduated from the University of Mississippi in May 2020 and now works as a news reporter at Fox61 in Hartford, Connecticut. She described Tucker as a hardworking person who never gives up and is always willing to learn more about her career so she can improve as a journalist. Turner said those qualities are what she admires most about Tucker.

Turner said Tucker feels she can never be too good or know enough. Therefore, she watches other journalists and learns from them.

“She isn’t afraid to ask questions, and she holds herself and others accountable,” Turner said.

Tucker may be graduating with a second degree, but she’s not ready to stop learning, yet.

“I think we all need continual growth and lessons to keep becoming better journalists,” Turner said. “Especially so we don’t get complacent in our craft.”

You can read the full story at OxfordStories.net.