If you’d like to attend the University of Mississippi School of Journalism and New Media, but you want to apply for scholarships to help fund your education, we’ve created a Q & A that will help you navigate the scholarship application process.

School leaders say you don’t have to be a straight A student to apply for some of our scholarships. We have multiple scholarships designed for a variety of students. So read the information below provided by Assistant Dean Jennifer Simmons and Interim Dean Debora Wenger to learn why you should apply.

Q. Some students don’t really understand how the scholarship process works. If you are a new or existing student who wants to apply for a scholarship, what steps should you take? Do you apply for individual scholarships, or do you just submit one application from our website? 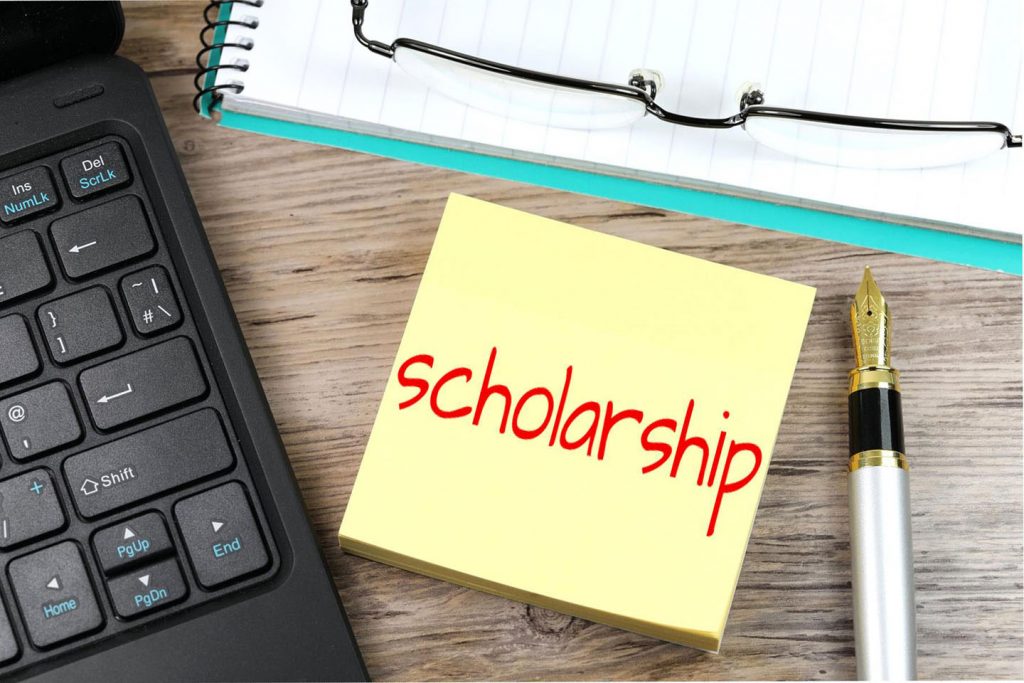 Q. What happens after you submit the application? How and when are the scholarships awarded? When will you be notified if you are selected for one? How are the selections made?

A. After the application is submitted, the Scholarship Committee within the School of Journalism and New Media will review the applications and make recommendations for awards. Reviews usually begin after Feb. 1. The committee completes a holistic review of each application received. Factors include, but are not limited to, standardized test score, GPA, journalistic or IMC involvement/experience, hometown/county, and high school.

Students who are awarded a scholarship through the School of Journalism and New Media must be admitted or enrolled in the Bachelor’s of Journalism or IMC degree program and will be notified by the Financial Aid office after April 1.

Q. Do you think there are some students who may be missing out on scholarship opportunities because they didn’t fill out an application? What would you say to encourage them to apply?

A. I think there is a misconception that you have to be a 4.0 student to receive a scholarship, and that’s just not true. We have multiple scholarships based on whether you are studying journalism or IMC, or if you’re from Mississippi, or if you are already working in the fields of IMC or journalism through internships or jobs. We encourage you to check out the list of scholarships we have available to see if you are eligible.

Q. If there is someone out there who would like to establish a scholarship in the name of someone else for our school, how would they do that?

A. We know there are people out there who believe in quality journalism and responsible integrated marketing communications, and we would welcome their help in supporting students who are pursuing those careers. We have a number of existing scholarships, including the Curtis Wilkie Scholarship for journalism students, the Robin Street Public Relations Student Support Fund and the Talbert Fellows Fund, which supports both journalism and IMC students, just to name a few. And, of course, we are always open to new ideas for scholarships, so please get in touch if we can help you support our students.

You can email Interim Dean Debora Wenger at drwenger@olemiss.edu if you are intersted in establishing a scholarship at our school. Visit our scholarship page to learn more.

Jaz Brisack is the 26th Rhodes Scholar and the first female Rhodes winner in University of Mississippi history. She is a general studies major who plans to study public policy during her time at the University of Oxford.

In April, she was named the university’s 15th Harry S. Truman Scholar. The junior was one of three UM finalists selected for the coveted scholarship. UM Communications reported that Chancellor Jeffrey Vitter told the Oxford native and Sally McDonnell Barksdale Honors College student about her win.

“Jaz Brisack is upholding our strong and distinguished tradition of student excellence and public service,” Vitter said in the news release at the time. “We are so pleased to offer programs and learning opportunities that prepare our students to be competitive on a national stage.” 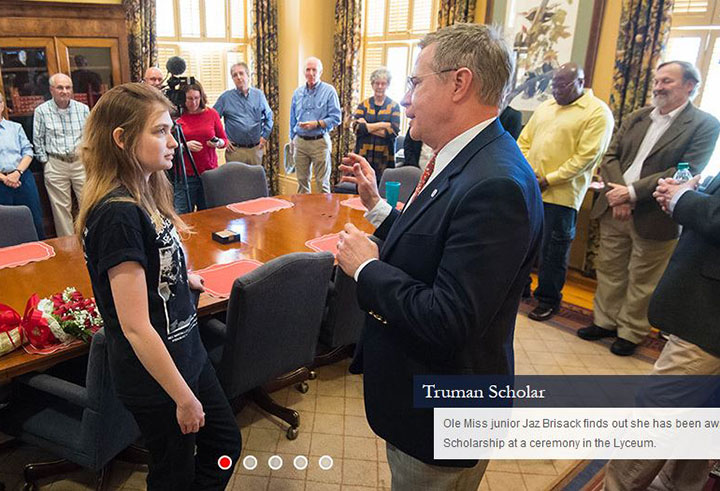 Joe Atkins, professor of journalism, has taught at the University of Mississippi since 1990. He teaches courses in advanced reporting, international journalism, ethics and social issues, media history, and labor and media.

“She is one of the most amazing students I’ve met in my nearly 28 years of teaching,” he said. “She visited me before I ever taught her, asking if she could get in my already closed Honors 101 course. She had researched me and my labor interests, and in our discussion, I was so impressed with her that we opened the class for her.”

Atkins said Brisack arrived at UM with a deep knowledge of labor and social history and a deep commitment to social justice issues, which she has demonstrated in a wide variety of activities, ranging from teaching in the Mississippi Delta to working with the United Auto Workers in the Nissan campaign in Canton.

“She has amazing intellectual breadth and a razor-sharp mind that I’m sure has helped her greatly in her debate sessions,” he said. “She has all the promise of being a true leader on a national and even international level.”

Atkins noted Brisack’s excellence in the classroom, fine writing skills, and commitment to a wide range of important activities beyond the classroom.

“She has boundless energy as well as a quick intellectual grasp of issues backed up by research and much reading,” he said. “She’s also engaging and good in working with people, proving herself again and again in her labor and political campaigns, working with American Indians in the Midwest and the poor in the Mississippi Delta. How she finds time to do all the things she does I don’t know, and I’m sure the Truman Scholar judges wondered about that, too.”

Curtis Wilkie, School of Journalism and New Media Overby fellow and an associate professor of journalism, has taught Brisack in three courses. Last semester, she was enrolled in Wilkie’s Honors College course on presidential debates. Janet Brown, executive director of the Commission on Presidential Debates who was instrumental in bringing the first 2008 debate to the Ole Miss campus, has been the guest lecturer for the past two weeks.

“Jaz not only gets high grades and is active in extracurricular interests,” Wilkie said, “but I found her to be one of the best-read students I’ve had in 17 years teaching at Ole Miss. That came across in the first class she had with me, when it was apparent she had already read so many of the books I mentioned. That was impressive.

“She’s also the kind of student who will drop by my office just to talk about current events or her political efforts outside the classroom. As you may know, she was home-schooled. I think she’s an extraordinary student, and I’m very proud of her accomplishments while at Ole Miss – whether its filling the Lyric for a rally for Jill Stein in the fall of 2016 or the unpopular (in Mississippi) causes she supports on behalf of laborers or American Indians or Palestinians.”

UM Communications reports that Brisack’s honors include having an article, “Organizing Unions as Social Policy,” published in the Global Encyclopedia of Public Policy, being a winner in the Creative Nonfiction division of the Southern Literary Festival and receiving the UM Outstanding Freshman award.

Brisack is also a National Merit Scholar finalist, a member of the UM debate team, and a recipient of the Honors College Extraordinary Research Funds and the Penny Leeton Service Award, UM Communications reports. She is also an Opinion columnist for The Daily Mississippian, the campus newspaper.

Brisack told UM Communications her plans include earning a master’s of fine arts degree in creative writing and working with a small and independent union or network of unions to help empower workers to bring democratic processes to their workplaces.”

“I want to help create a network of independent locals with self-determination that retain nationwide leverage while maintaining a decentralized approach,” Brisack said in the news release.

The Harry S. Truman Scholarship is highly competitive scholarship of up to $30,000 given to college juniors who have leadership potential and a commitment to public service. It was created in 1975 in honor of the 33rd president.

The UM Communications news release mentioned in this post was written by Edwin Smith.