Hundreds of Mississippi’s aspiring writers, publishers and journalists visited Oxford in April for the 72nd Mississippi Scholastic Press Association Convention hosted by the University of Mississippi.

Students from high schools across the state came for the one-day event Monday, April 1, to hear speakers, participate in seminars and immerse themselves in the Ole Miss campus.

The convention helps high school students who work for their respective school newspapers, yearbooks, broadcasts and literary magazines realize they share a passion for publication with hundreds of peers in the state, said R.J. Morgan, MSPA director.

“There will be a lot of these students who have never been on a college campus, so letting them see how college works and exposing them to that environment gets them thinking in terms of attending college. The convention really serves as a rallying point and pep rally in terms of helping these students understand that this is something they should feel proud of, something they can hang their hat on.”

The highlight of each year’s convention is the MSPA awards ceremony, Morgan said. This year, besides announcing more than 100 winners and finalists, including best-of honors for several publication types, the MSPA announced a new honor called the All-Mississippi recognition. Ten students were selected from a field of 20 candidates who submitted portfolios of their journalism work.

More than 700 individual pieces of work were submitted for the various prizes.

“The awards are really what the kids are most excited about,” Morgan said.

Agnew is a veteran of the newspaper and news industry, previously serving as the executive editor of The Clarion-Ledger in Jackson. 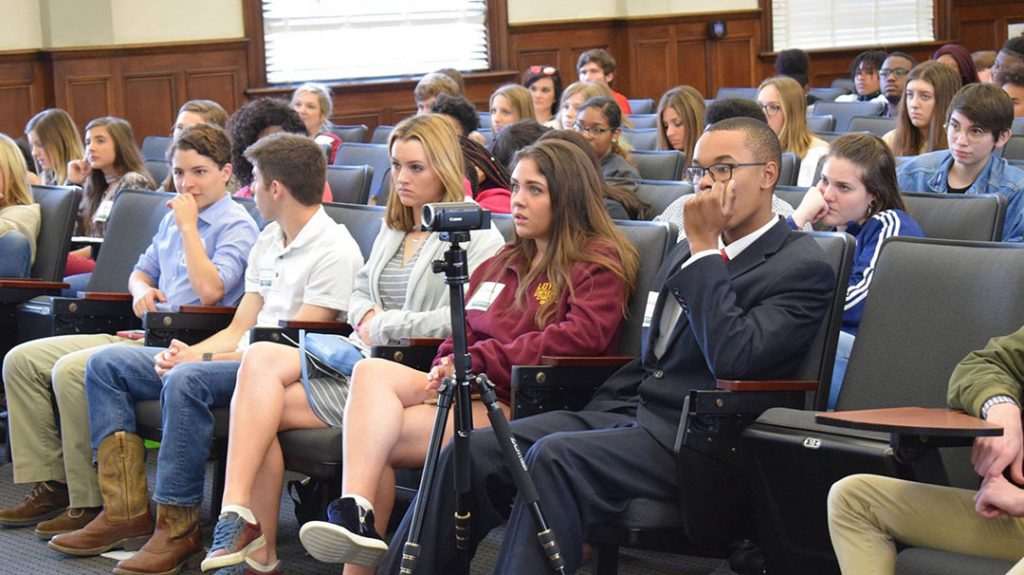 “(Agnew’s) wealth of experience in both print and digital media, as well as his dedication to education and serving others, made him a natural choice to deliver this address to our statewide audience,” Morgan said.

Other speakers include Pablo Correa, a documentary filmmaker working on a feature-length film about Fannie Lou Hamer, and Lori Oglesbee-Petter, a nationally recognized newspaper and yearbook adviser who serves as an advocate for First Amendment rights.

“There’s never been a greater need for good communicators,” Morgan said. “The number of platforms and reasons to tell those stories has greatly diffused in the last decade, and we really need good storytellers to cut through the noise in our society.

“We hope to help these students find their voice and refine that voice and teach them going forward how to be good citizens and good communicators.”

Besides attending the convention, Correa discussed his work with the “Fannie Lou Hamer’s America” documentary team in a separate event in the Overby Center Auditorium.

The MSPA was created in 1947 to “support, promote and nurture journalism in a high school setting through workshops, competitions, conventions and online aids and advice. Membership is open to any Mississippi school that has a newspaper, yearbook, literary magazine, online publication, broadcast and/or journalism class.” It is housed at the university.

UM has hosted the spring convention since its inception. Two years ago, a fall convention was added at the University of Southern Mississippi. The event usually draws approximately 500-600 high school students, Morgan said.

For more information on the convention or MSPA, visit its website.

This article was written by Justin Whitmore of University Communications. 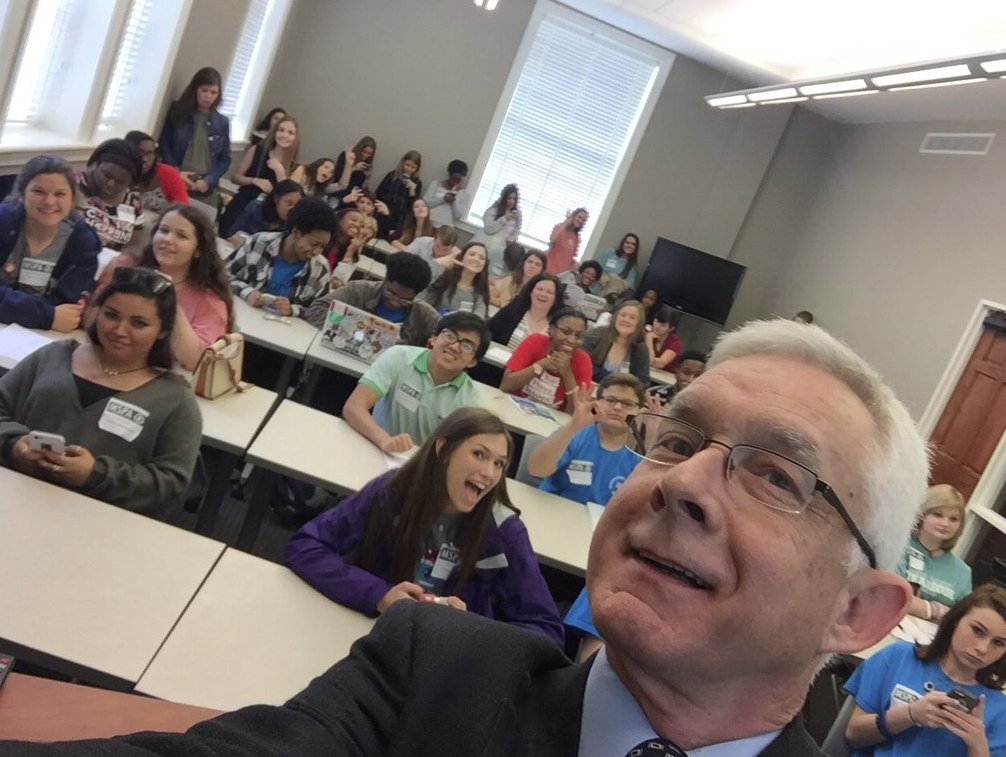 That’s why R.J. Morgan, Mississippi Scholastic Press Association director, is passionate about his job and the MSPA State Convention set for Friday, March 31, on the University of Mississippi campus.

UM will soon welcome 500-600 high school students. The convention will be held in Farley Hall with breakout sessions in Lamar, Yerby and Brevard Halls. The event will begin with breakfast and registration in the Grove from 8 a.m. to 9 a.m. and an opening welcome. Students will attend three breakout sessions at 9:30 a.m., 10:30 a.m. and 11:30 a.m. They will break for lunch in the Grove at 12:15 p.m., and the afternoon events will begin at 1 p.m. in the Ford Center with the keynote speaker and awards program. The deadline to register is March 20.

The keynote speaker is essayist and Jackson native Kiese Laymon, who attended Millsaps College and Jackson State University before graduating from Oberlin College, a private liberal arts college in Oberlin, Ohio. He earned a master’s degree in fine arts in fiction from Indiana University and is now a professor of English and African American studies at the University of Mississippi.

Laymon is author of the novel Long Division and a collection of essays called How to Slowly Kill Yourself and Others in America, the UK edition released in 2016. He has written essays, stories and reviews for numerous publications including Esquire, ESPN the Magazine, Colorlines, NPR, LitHub, The Los Angeles Times, The Guardian, PEN Journal, Oxford American, The Best American Series, Ebony and Guernica, according to his bio at kieselaymon.com. He has two books in the works, including a memoir called Heavy and a novel called And So On, expected in 2017 from Scribner.

“He’s a native Mississippian, who has gone on to be a highly respected and published voice,” Morgan said. “He’s so nuanced and really does a good job of articulating a point of view. That’s what I think he’s going to talk about. He was a high school journalist. When we can, we like to find people who were high school journalists.”

Morgan said the MSPA includes about 80 high school member publications. Web only is a small part. Most are newspapers, yearbooks or broadcasts. He said high school journalism teaches students how to organize their thoughts and express them clearly and concisely. It teaches them how to communicate, talk to their peers and strangers, and interview someone.

“It teaches them the importance of deadlines, the importance of design, and the way you structure things for maximum utility,” Morgan said. “High school journalism teaches them to question society, to look at things around them, and to look at what is being presented to them on the surface and critique it, whether that is their school policy on dress code or whether that is a bigger community issue.”

Oxford High School recently published a story about homelessness in Oxford. The student journalists identified and interviewed 93 members of their school district who are homeless in Oxford, Morgan said.

“Now there are groups and community organizations that are donating and trying to help those people,” he said, “and so it’s an extremely valuable learning experience that those kids take with them.

“To use education terminology, high school journalism is a really good exercise in the project-based learning theory. You give students an outlet, whether that is tomorrow’s broadcast or next week’s newspaper. You teach them the base skills that are required of that, and then you let them innovate, develop and create their own process to get from point A to point B, and that type of learning is really advanced and really challenges them as individuals.”

MSPA is the high school journalism organization in Mississippi. The association works with high school staffs all across the state in four areas – school newspapers, including online-only publications, print publications and news magazines; yearbooks, which almost every school has; broadcasts, which have doubled in the last two years; and awards and sessions for literary magazines for creative writing students.

“Our state convention offers skills workshops and education to help students better serve the communities in which they live and work,” Morgan said. “We also run a number of contests to honor and validate people in those four areas.”

“We’re going to do a session on the current climate around media in our country, and the way we’ve been labeled, and how students can go about dealing with that,” Morgan said. “We have several different specialty sessions I’m excited about.”

Robby Donoho, a sports anchor from WCBI in Columbus, will lead several sessions.

“We really try to gather speakers in the industry and those who are teachers of journalism from across the state and beyond,” Morgan said. “I have a photographer coming from Forsyth County News in Atlanta. He is a photographer and also a content director for the non-daily newspaper, and student publications are essentially non-dailies. They might publish once a month if they are lucky. Usually, it’s more like twice or three times a semester, and so I think having the ability to hear some professional non-daily workflow information will be really neat.”

Morgan said they also try to bring in marketing speakers because the University of Mississippi has an integrated marketing communications program. They try to teach students how to market their publications and better develop their brand identity.

When MSPA started in 1947, Morgan said the convention was similar to a camp. The role of school publications has changed a lot in the past 70 years, and the convention has been a one-day event since the 1970s.

“This generation – they are really innovative storytellers,” he said. “I don’t think they necessarily see themselves that way, but the way they communicate with themselves and their peers through social media and print – through broadcast, shorthand, longform – there are so many different ways they can communicate and get information to their audience. They really just amaze me.”

Morgan’s goal for every conference is to give students seeds of knowledge in new areas.

“When they get back to their schools,” he said, “it is then up to them, their communities and their teachers to foster the growth of those seeds, to the extent that we, in five and six hours, can open their mind to a new way of doing things, a better or more professional way of handling themselves, covering an event or telling a story.”

Morgan said he hopes the MPSA is a factor in the Meek School of Journalism and New Media’s growing enrollment. It is one of the fastest growing programs at UM.

“Anytime you can get 500 of the best and brightest high school students from the state on your campus, and on a campus as beautiful as this, they can’t help but take something away from it,” Morgan said. “Anytime you can get them in a facility interacting with professors that are as engaging and as interactive as ours, I don’t see how that doesn’t spark their attention.”

Morgan said the MSPA is not a recruiting arm, and they do not try to indoctrinate students about UM. They are a statewide organization focused on developing high school journalists.

“But a rising tide lifts all boats, and you can see the quality of students coming to Ole Miss begin to rise,” said Morgan who believes high school journalism is an important part of education in a media-saturated world.

“I talk to high school administrators all the time who have cut the school newspaper, or who have cut the journalism program from the school because there’s so much pressure at that level for state testing and core curriculum, etc.,” he said. “I had a school administrator tell me one time, ‘Yeah. We don’t do a school newspaper anymore because nobody reads those. Newspapers are kind of a dying thing.’

“And after I calmed down, I challenged his point of view, and I said, “So your position is that a student living in 2017 needs to know less about how media works and media literacy than they did in 1985? We are such a media society now. We are over-saturated with media, stimuli everywhere you look – on our phones, on our television screens, 24 hour news, Twitter, the barrage of bits of information that are coming to us all the time. So by teaching students journalism skills, by teaching them to be better thinkers, it also teaches them to be media consumers.”

If you plan on attending the convention or following it, the event hashtag is #MSPA17.