At a time when American politics seem hopelessly polarized, a pair of prominent figures from the two major parties discussed the prospects for more centrist views at the Overby Center for Southern Journalism and Politics’ program in April.

Stuart Stevens, a native Mississippian who managed Mitt Romney’s presidential campaign in 2012, and David Baria, a Democratic leader in the Mississippi legislature, were guests in a conversation that included Charles Overby, the chairman of the center, and Overby Fellow Curtis Wilkie. Both Overby and Wilkie have long experience covering national politics as journalists.

The event was held in the Overby Center Auditorium on the Ole Miss campus. Like all Overby programs, was free and open to the public.

The program represents a return engagement to the Overby Center for Stevens, who has previously appeared to comment on American politics and to talk about his book, “The Last Season,” in which he wrote of accompanying his aging father to a complete season of Ole Miss football. Though a major player in national Republican circles, Stevens has become a fierce critic of President Donald Trump and his style of divisive politics.

During his tenure in the Mississippi House of Representatives, Baria, an attorney with offices in Jackson and the Gulf Coast, has become one of the Democratic Party’s most respected members in the legislature. Last year he served as the party’s nominee in an unsuccessful bid for the U.S. Senate seat held by Roger Wicker.

The Overby Center for Southern Journalism and Politics at Ole Miss begins its spring schedule next week with a lineup that accentuates politics and decision-making for an election year in Mississippi.

“Our programs feature a nationally known federal judge who grew up in Mississippi, journalists from The New York Times and The Washington Post, authors and political experts,” said Charles Overby, chairman of the center. “The programs offer a rich opportunity for conversations between the panelists the audiences on a broad array of subjects.”

Each event will take place in the Overby Center Auditorium. The programs are free and open to the public, and parking will be available in the lot adjacent to the auditorium. The schedule includes:

Read more descriptions of upcoming Overby events below the graphic.

Two seasoned journalists who cover state politics – Emily Wagster Pettus of the Associated Press and Adam Ganucheau of Mississippi Today –will provide early intelligence on the developing contests for statewide offices this year. They will talk with Overby and Overby Fellow Curtis Wilkie.

Burnis Morris, an Ole Miss graduate who is now a journalism professor at Marshall University, returns to campus to discuss his new book based on the work of Carter G. Woodson, who was called the “Father of Black History.” He will be joined in the conversation by Alysia Steele, the author of “Delta Jewels” and a member of the journalism faculty at Ole Miss.

The chief media columnists for The New York Times and The Washington Post will weigh in on the fake news phenomenon and how it is not only undercutting a civil discourse in the country, but is also striking at the heart of our democracy. Margaret Sullivan of The Post (the former public editor of The New York Times) and Jim Rutenberg of The Times, a long-time political reporter, head up a panel on this issue that has gone from a funny catch phrase to a crucial challenge for covering the news. They will talk with Overby and Overby Fellow Greg Brock.

Yeats coined the term 100 years ago in his famous poem, “The Second Coming,” but the expression applies today in the nation’s bitterly divided politics. Stuart Stevens, a Mississippi native and architect of Mitt Romney’s 2012 presidential campaign, and David Baria, a Democratic candidate for one of Mississippi’s U.S. Senate seats last fall, will talk about the dilemma with Overby and Wilkie.

U.S. District Judge William Alsup of San Francisco and attorney Danny Cupit of Jackson were white high school and college friends in the segregated environment of Mississippi in the 1960s. Alsup has written a book, “Won Over,” about how he broke through the segregationist status quo to become a civil rights advocate. He and Cupit will talk with Overby and Wilkie about their experiences.

Two veterans of Mississippi’s politics — a Republican and a Democrat — reviewed the results of the Nov. 6 election and offered commentary on the extraordinary runoff for a U.S. Senate seat during the final program of the fall season at the Overby Center for Southern Journalism and Politics Wednesday, Nov. 14.

Austin Barbour, who held prominent roles in past Senate campaigns of Roger Wicker and Thad Cochran, joined Brandon Jones, a former member of the state House of Representatives and co-founder of the Mississippi Democratic Trust, in an hour-long discussion with two former national political reporters, Charles Overby, chairman of the center, and Overby Fellow Curtis Wilkie.

A focus of the program was the Nov. 27 runoff between Cindy Hyde-Smith, a Republican appointed to fill a seat vacated by Cochran’s resignation, and Mike Espy, a former Democratic congressman from Mississippian who served as President Clinton’s secretary of agriculture. Hyde-Smith and Espy both won more than 40 percent of the votes in the midterm election, but because neither topped 50 percent, it triggered a rare runoff to determine who would take the remaining two years of Cochran’s term.

The panel also discussed the state of politics in the rest of the country and what the mid-term elections will mean to the 2020 presidential campaign.

“The end of the midterm elections signals the beginning of the presidential race,” said Overby before the event. “We will talk about the ramifications of the midterms in Mississippi and beyond.”

Barbour comes from a First Family of Republicans in the state. His father, Jeppie Barbour, became one of the first members of the GOP to serve as a mayor in Mississippi when he was elected to the post in Yazoo City nearly 50 years ago. Former Gov. Haley Barbour is Austin’s uncle. As a result, Barbour has worked in and around campaigns all his life.

He is managing partner of the Clearwater Group, a regional public affairs firm in Jackson, and also a partner in Strategic Partners & Media, a national advertising group based in Annapolis, Maryland.

Jones is an attorney with Baria-Jones, a law firm with offices in Jackson and Bay St. Louis. (His partner, David Baria, ran unsuccessfully against Wicker for the other U.S. Senate seat at stake this month.)

Jones has also worked as an advisor for Democratic candidates in a number of other state and local campaigns in Mississippi.

Check out this story by The Daily Mississippian about J. Hogan Gidley, 41, of South Carolina, who is a 1998 graduate of the University of Mississippi with a degree in broadcast journalism and minor in political science.

Gidley is pictured below with Meek School faculty members Senior Lecturer in Journalism Robin Street and Dr. Jim Lumpp. He returned to the Meek School to speak to students several years ago. 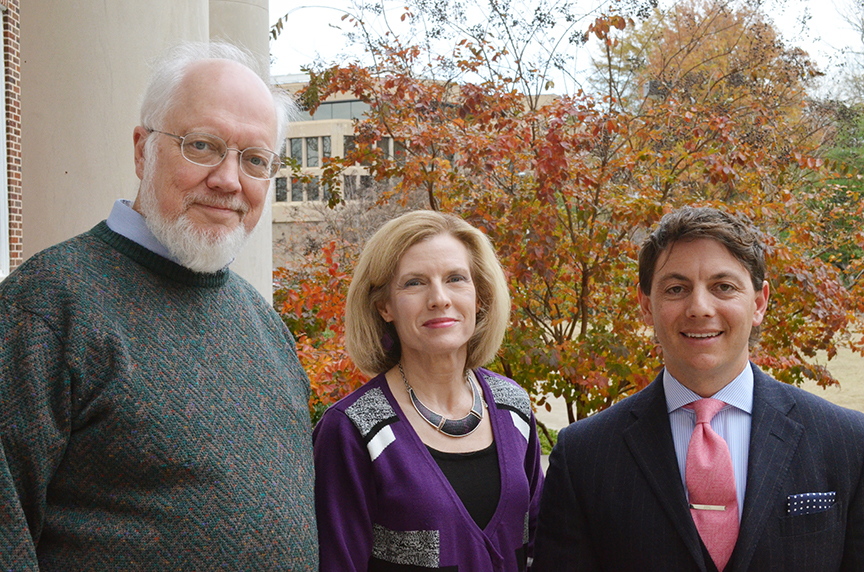 David Shribman, the Pulitzer Prize-winning executive editor of the Pittsburgh Post-Gazette, was the featured guest in the first of this fall’s election-year programs at the Overby Center for Southern Journalism and Politics at the University of Mississippi on Friday, September 7.

A nationally syndicated columnist and a frequent analyst for BBC Radio, Shribman joined Charles Overby, chairman of the Overby Center, and Overby Fellows Bill Rose and Curtis Wilkie in a conversation about the 2012 presidential campaign and American politics in general. Overby, Rose and Wilkie covered national politics for years as journalists for major newspapers.

“David Shribman has distinguished himself for years with his thoughtful commentary,” said Wilkie, who worked with Shribman at the Boston Globe. “We covered campaigns together, and he’s one of the best.”

Shribman has followed national politics for more than 30 years. He began his career with The Buffalo Evening News and quickly moved from a city beat to become a member of the newspaper’s Washington bureau. He later joined the national staff of The Washington Star. After the Star ceased publication in 1981, Shribman covered American politics for The New York Times and then became a national political correspondent for The Wall Street Journal.

He was hired as Washington bureau chief for the Boston Globe in 1993. While at the Globe, Shribman won the Pulitzer Prize for his coverage of Washington and the American political scene.

In 2003, he became executive editor of the Post-Gazette. He lives in Pittsburgh with his wife, former Washington Post columnist Cindy Skrzycki, and their two daughters.

You can watch the full program here.