University of Mississippi students won 25 awards in two major regional contests this past weekend, and were named the 1st Place Journalism Champions for the on-site competitions.

The Best of the South contest recognizes the best student journalist work published or broadcast in 2017. In this year’s contest, there were 412 entries from 30 universities. Each UM entry consisted of several examples of student and staff work, from The Daily Mississippian, NewsWatch Ole Miss, Rebel Radio, internships and published projects. 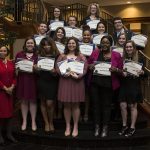 Group photo following the Friday Best of the South banquet. 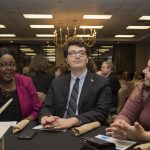 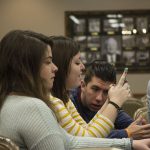 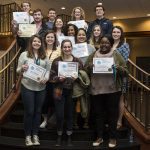 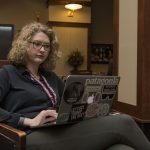 Other awards won by UM students:

Fifteen UM students traveled to Arkansas to participate in the on-site categories, accompanied by Meek School Assistant Dean Patricia Thompson, who oversees all of the Student Media Center.

“Year after year, our students excel in both the Best of the South and the on-site competitions,” Thompson said. “Some of them are in our newsroom for many hours each day, five days a week. They use what they learn in classes to produce outstanding work, and they do so not just to gain practical experience for internships and jobs, but also because they are passionate about keeping the campus and community informed about events and issues.”

This is the sixth time in the past eight years that UM students have won SEJC’s on-site journalism grand championship award. University of Mississippi students were ineligible to compete in the on-site contest last year because the Meek School of Journalism and New Media was the host for the 2017 conference in Oxford.

SEJC’s Friday night awards banquet speaker was Sonia Nazario, who won a Pulitzer Prize for feature writing and other national awards for “Enrique’s Journey” when she was a Los Angeles Times staff writer and is now an author, activist and frequent New York Times contributor.

The conference did not have an overall theme, but it included workshops and panels focused on digital content, engaging audiences, broadcast storytelling, yearbook journalism, how to cover campus hazing issues, photojournalism, design, and a look back at the Little Rock Nine and the role journalists play in documenting stories about marginalized people.

Mike Raffaele, WTVA news director, met with University of Mississippi School of Journalism and New Media NewsWatch students last night offering advice about improving the newscast and about getting internships and jobs.

BY ROSS LYELL AND MAGGIE DAY

With graduation drawing near, students of the Ole Miss class of 2012 are signing names, stuffing envelopes and sticking stamps on letters to their parents to donate towards the “Senior Class Gift.”

The class launched a letter campaign and is accepting donations to go towards a plaque detailing the history of the Hotty Toddy cheer.

The Senior Class Gift is an annual present given to the university by the current graduating class in order to leave its mark on campus.  Gifts have ranged from benches in the Grove to a marker on the Lyceum lawn displaying the University Creed.
Senior class president Toran Dean says school spirit was a deciding factor in this year’s gift.

“Almost every student on the senior class executive committee wanted to give something that would showcase our school spirit, and we settled on a plaque with the history of the Hotty Toddy cheer,” Dean said.   “People always ask where the Hotty Toddy comes from, and most students and alumni don’t know how to answer.”

Dean says that the class of 2012 has witnessed traditions come into question since its tenure at Ole Miss, and that Hotty Toddy is an all-encompassing tradition.
Senior class council member John Kaiser says he hopes that everyone, students, faculty and alumni alike, can enjoy the gift once it is placed on campus.

“I hope that our senior class gift helps to further tie us together,” Kaiser said. “I feel like it’s the perfect gift to leave the university with.”

A home for the plaque  on campus is yet to be determined.  A team led by Ian Banner, university architect, is working to find the perfect spot.

Donations for the gift are tax deductible and can be given through the UM Foundation by clicking the link or by calling 800-340-9542.