The Hugh M. Hefner Foundation will honor a University of Mississippi School of Journalism and New Media student at its annual First Amendment Awards event May 15, 2019, at the Newseum in Washington, D.C.

Grace Marion, a journalism student who serves as the Society of Professional Journalists president, will be honored with others recognized for their efforts to help protect and enhance First Amendment rights for all Americans and to raise awareness of modern-day challenges to freedom of speech and expression.

As the former editor-in-chief of her high school newspaper, The Playwickian, Marion fought against school censorship after she saw about a dozen articles censored.

“Marion was able to publish her final jaw-dropping article during her last year at the school, which outed the school for the lack of sexual misconduct records for its teachers,” the foundation news release reads. 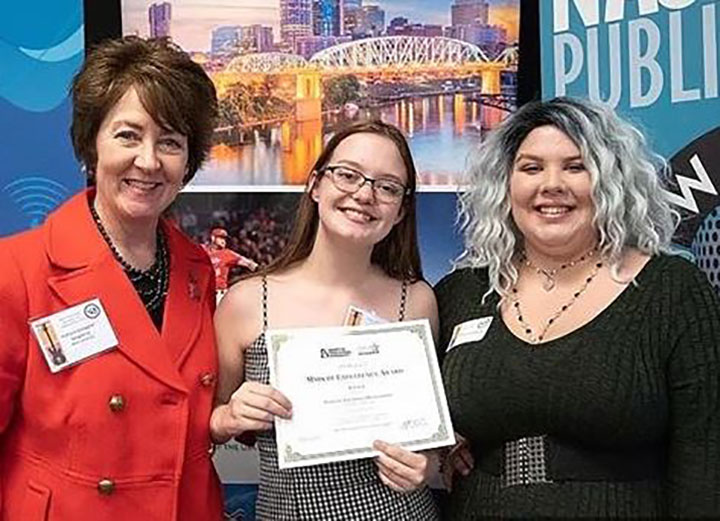 According to the Freedom Forum, more Americans are concerned about their First Amendment rights than at any time in the past 25 years, the release reports.

“Recent concerns stem from censorship issues on school campuses and social media, attacks on reporters and threats to the press, and the growing threat of new technology, such as tracking devices and facial recognition software,” the release reports. “As threats to the press reach an all-time high, the Newseum, the Freedom Forum Institute and the Student Press Law Center have declared 2019 as the Year of the Student Journalist.”

“From a reporter being stripped of his White House press pass, to newsrooms being threatened and attacked, members of the press are being viciously targeted while ‘fake news’ has become a common term used by politicians and the public,” Hefner said in the news release. “Millions of students are exposed to a censorship culture within our education system as free speech violations take place at our schools and on college campuses. We cannot allow First Amendment threats to become commonplace in our country.”

Christie Hefner established the Hugh M. Hefner First Amendment Awards in 1979 to honor her father’s lifelong commitment to defending the First Amendment. Since 1979, the Foundation has recognized 150+ free speech advocates at their annual awards events. Previous honorees include high school students, lawyers, librarians, journalists and educators. A complete list of past award winners and judges can be found here.

“Because of the dedication and commitment of Americans who refuse to be censored, threats to the First Amendment do not go unchallenged,” Christie Hefner continued in the news release. “We honor and recognize America’s unsung heroes: the individuals who put themselves and their organizations at risk by bravely defending their constitutional right to freedom of speech and expression. The Foundation is honored to recognize this year’s award winners who were carefully selected from hundreds of nominations. Assaults to the First Amendment cannot go unnoticed. We’ll continue to raise awareness of these violations and recognize America’s brave free speech heroes.”

The 2019 honorees also include:

After a public call for nominations issued by the Foundation, the awardees were selected by an independent panel of judges: Karen Tumulty, a columnist and former national political correspondent for The Washington Post who writes frequently on free speech and the First Amendment; Neal Katyal, the Paul and Patrician Saunders Professor of Law at Georgetown University, a partner at Hogan Lovells, and former acting solicitor general of the United States; and Michael B. Keegan, president of People for the American Way and People for the American Way Foundation.

The Hugh M. Hefner Foundation was established to work on behalf of individual rights in a democratic society.  The primary focus of the foundation is to support organizations that advocate for and defend civil rights and civil liberties with special emphasis on First Amendment rights and rational sex and drug policies.