School of Journalism and New Media Associate Professor Deb Wenger, assistant dean for innovation and external partnerships, and her co-author Deborah Potter have been honored by the Electronic News Division of the Association of Educators in Journalism and Mass Communication. They received the Burkum Service Award for their work in serving the journalism industry and journalism education. 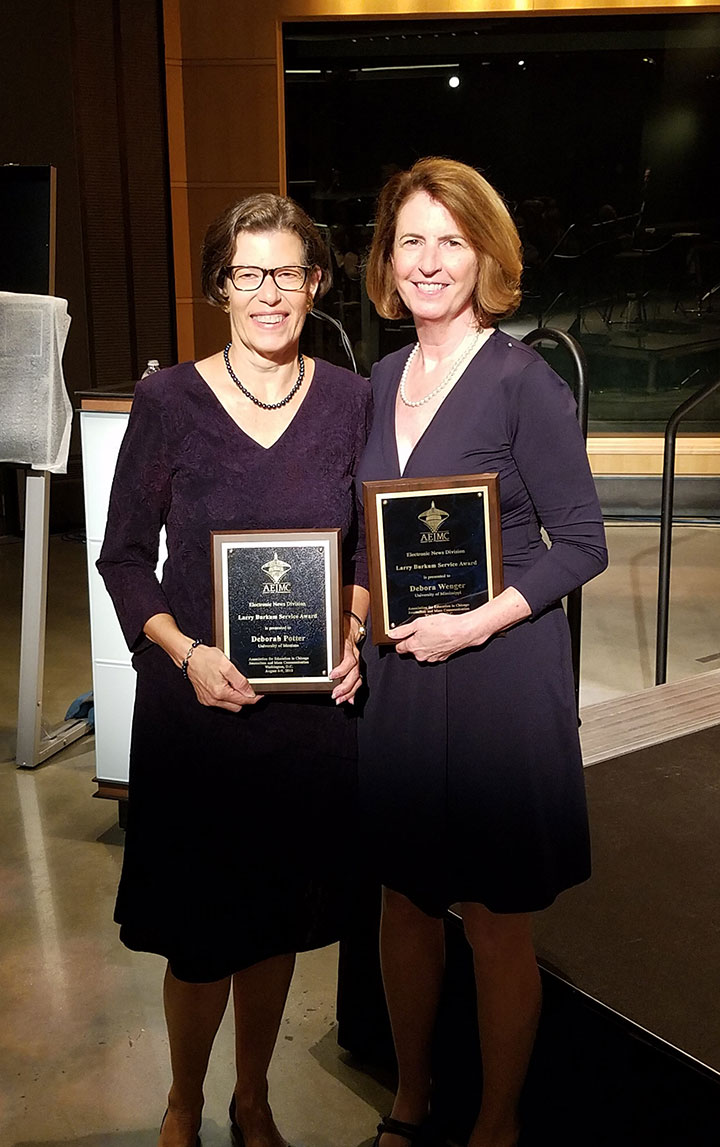 Deborah Potter and Debora Wenger, Ph.D., are each being honored with 2018 Larry Burkum Service Awards for their service to journalism and journalism education.

The Electronic News Division will honor Potter and Wenger in August at AEJMC’s annual conference in Washington, D.C. A committee of former END Division Heads and previous Burkum Award winners selected each woman from a pool of nomination.

Debora Wenger, Ph.D., is currently assistant dean for innovation and external partnerships at the Meek School of Journalism and New Media at the University of Mississippi. Her work as a trainer for the Society of Professional Journalists’ partnership with the Google News Initiative has taken her to institutions and newsrooms around the country. 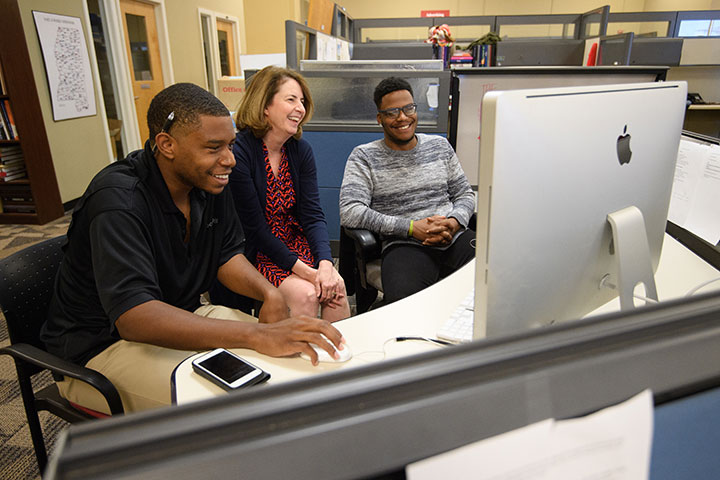 In addition, she regularly contributes research to both academic and professional publications, focusing primarily on multimedia journalism practice and education. Prior to her work in academia, Wenger was a reporter, anchor and news manager at various local television stations.

“This is amazing,” Wenger said when she learned of the honor. “This is such an honor. I’m so touched to be recognized this way. None of us gets into this for the accolades or the awards, but this is special. It really means a lot to me that colleagues see the value in the overall goal of  my work.”

“I’m beside myself with excitement,” Dupont said. “I see firsthand how dedicated Deb is to her students, and she shows that not only by working with them, but by preparing both them and the industry for this new world of change we’re facing.”

“She really is one of those who sets a standard for bringing the industry and the academy together,” he said. “Whether it is at conferences, workshops or in published research, Deb pushes everyone to look beyond what they’re doing now and to look ahead. Her work provides answers, but also pushes people to use her findings to come up  with answers that work best for them. I’m so excited for her; she really is a great choice to honor this year.” 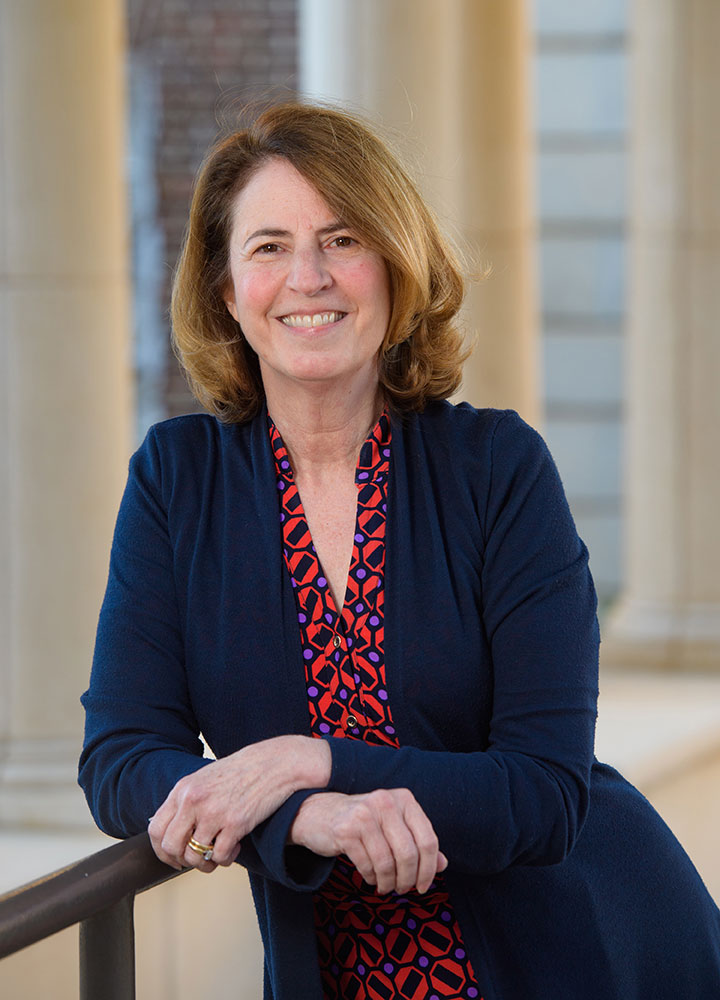 Potter is the founding director of NewsLab, now affiliated with the Meek School of Journalism and New Media at the University of Mississippi. Potter has been a correspondent, anchor and program host at CBS, CNN and PBS, as well as various local television and radio stations.

Currently, a Pollner professor at the University of Montana School of Journalism, Potter has taught at multiple institutions and has led hundreds of training sessions for students and professionals. In addition, she has served as executive director of the Radio-Television News Directors Foundation.

“I’m so excited,” Potter said when she learned the news. “This is a great honor. It really means a lot to me to be recognized like this.”

Potter noted that she has long had an interest in giving back and teaching, and “(my) work with NewsLab and RTNDF grew out of that. I’ve really enjoyed bringing educators and professionals closer together, and being honored with this award is just a thrill.”

“Deborah Potter is truly one of the leaders in connecting students to industry,” said Bill Davie, Ph.D., at the University of Louisiana-Lafayette, a member of the selection committee. “She is one of those people who has such energy and enthusiasm for helping students and professionals get better at their craft. I think her work over the years is exemplary of what we all try to do – make a difference with out students and the profession.”

Tim Brown, Ph.D., of the Nicholson School of Communication at the University of Central Florida and Burkum Committee Chair, was equally enthusiastic about Potter’s  selection.

“Her NewsLab work and workshops, as well as her work with RTNDF, have been models for me in what I try to pass along to my students,” he said. “She’s one of those who just works to make the business better than she found it, and I can really appreciate that. I still use some of her earlier NewsLab tips and tricks; they’re so solid and fundamental, they stand up each passing year.”

The committee notes that Potter and Wenger have collaborated on multiple projects, including the reporting textbook Advancing the Story, now in its 4th edition. However, it is important to point out that each woman is being honored individually for her own accomplishments.

While honoring two individuals with this award is a bit unusual, the committee believes these two are equally worthy of recognition this year. The Burkum Awards will be presented to Potter and Wenger on Tuesday, Aug. 7, 2018 in Washington, D.C.

The Larry Burkum Service Award is presented by the Electronic News Division of the Association for Education in Journalism and Mass Communication. This award recognizes an electronic journalist or journalism educator who has demonstrated extraordinary service to journalism education.

Larry Burkum served the Electronic News Division as secretary, newsletter editor and webmaster from 1995 to 2005.  He was presented the inaugural Burkum Award at the 2005 AEJMC convention in San Antonio. 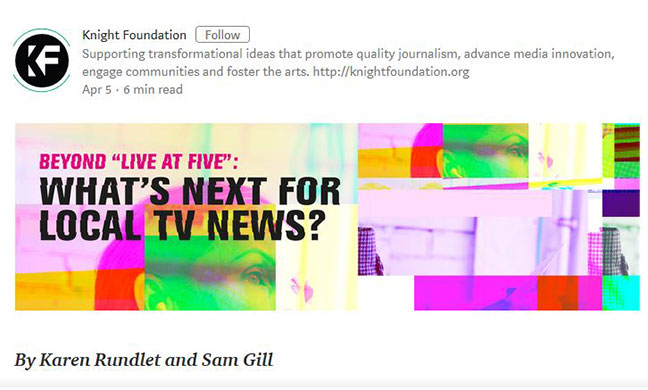 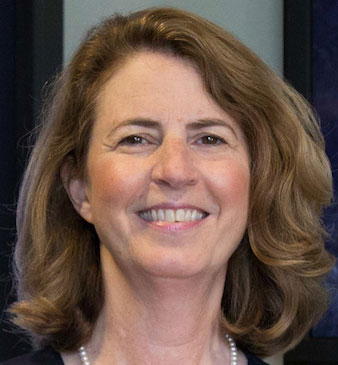