Young program, one of university’s largest, thanks to passionate faculty and alumni

Scott Fiene remembers watching the first handful of integrated marketing communications students walk across the commencement stage in 2013, completely unaware that in less than a decade, he would be watching hundreds of IMC graduates cross the stage each year.

The University of Mississippi‘s IMC program began with 51 students in the School of Journalism and New Media in 2011, and has since boomed to just under 1,200 enrolled.

The unprecedented growth is thanks in large part to the passion of the faculty members and IMC professionals who take students out of the classroom and into the ever-changing world of marketing and communications. 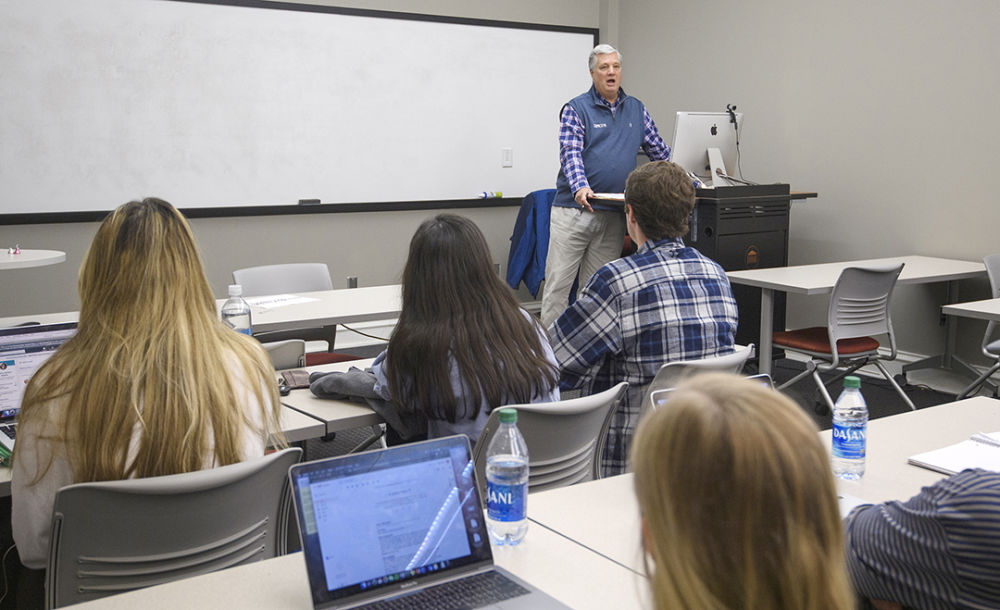 Archive Photo: Sports marketing professional Scott Pederson talks to students in an IMC Sports Marketing intersession class in Farley Hall. Part of what has made the Ole Miss IMC program so successful in its first decade is the ability to bring passionate practitioners into the classroom. Photo by Thomas Graning/Ole Miss Digital Imaging Services.Passion for the Work

Debora Wenger, interim dean of the journalism school, was the administrator tasked with being the “paper pusher,” as she describes it, shepherding the program through the creation and approval process, but she credits Fiene with being IMC’s greatest advocate and promoter on campus. Fiene was assistant dean of curriculum and assessment for the program during its unprecedented growth.

“Scott really nurtured it,” she said. “The program grew because of Scott’s passion and dedication. He has incredible enthusiasm for the program and his passion is infectious. Students would take his class and then switch majors because he made it so engaging for them.”

Fiene passes that credit on to the faculty the program has been able to assemble over the past decade.

“Our faculty really care and put students first,” Fiene said. “I don’t recall sitting down and saying, ‘This is how we’re going to grow, and this is the experience we’re going to deliver to these kids.’

“A lot of it is simply the attitudes of the people we hired who have had very successful careers and now want to teach because they have an absolute passion for this.” 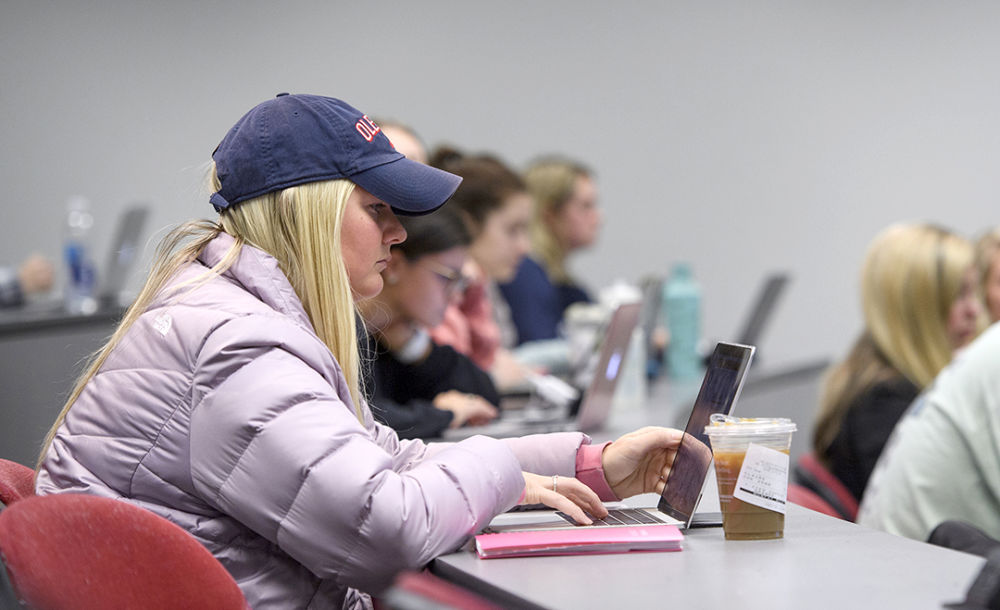 The passion for students is evident. Even on sabbatical, Fiene finds himself following his graduates as they enter the job market and move into leadership positions around the country.

Jackson Sepko, a senior IMC major from Collierville, Tennessee, first encountered the IMC faculty’s enthusiasm the spring before his freshman year. After his tweet about Ole Miss baseball went viral within the Ole Miss sports online community, he received a direct message from IMC professor Debbie Hall asking if he was an IMC major.

Sepko had already signed up to be an IMC major, but it was a series of continued positive, affirming and proactive interactions like the one he had on Twitter that gave him the confidence to pursue more and more competitive opportunities. During his freshman year, Hall encouraged Sepko to pursue a PGA internship reserved for juniors and seniors.

“Every single professional opportunity I’ve had has been because of an IMC professor,” Sepko said. “Once a professor understands a student’s passions, they plug them into the classes and experiences and introduce those students to the people who are doing it in the real world.”

This semester, Sepko is applying his IMC experience as a digital media marketing assistant for the Ole Miss Department of Intercollegiate Athletics.

Clare Combs, a 2021 IMC graduate from Austin, Texas, is a community manager at Likeable Media in New York. Combs recalled the way Hall, her professor and academic adviser, made her feel welcome on the first day of class. Running late, Combs rushed to class through the rain and then slipped and fell the moment she arrived in class.

“I was so embarrassed,” Combs said. “But Mrs. Hall immediately directed the class’s attention to herself so I could quietly make it to my seat. After class I thanked her, and she told me, ‘I never want my students to feel anything other than great in my class.’”

After that, Combs took one of Hall’s classes every semester and relied on Hall as a mentor and sounding board while looking for her first job after graduation. 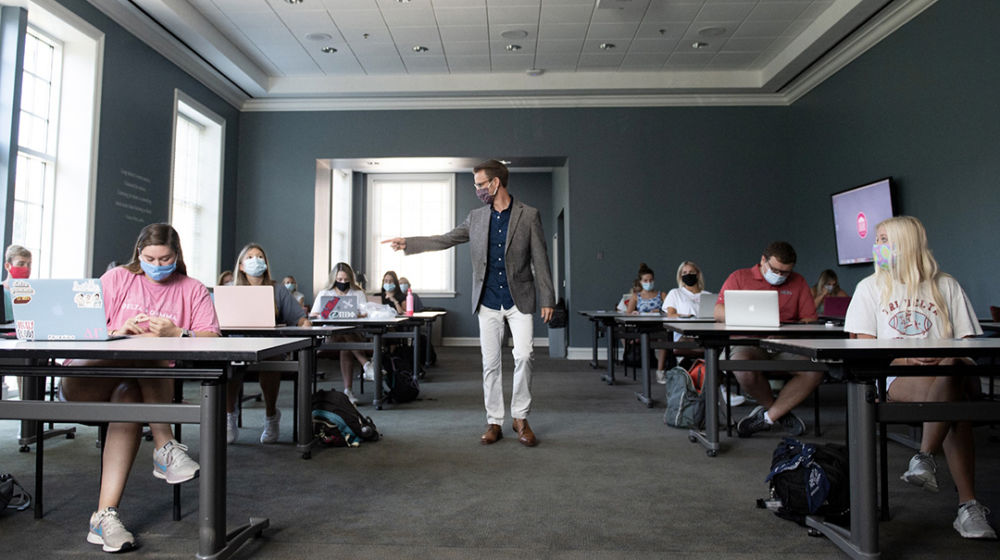 Dennis Irwin, associate director of marketing and brand strategy for the University of Mississippi, teaches students. In 2011, the Integrated Marketing Communications program at #OleMiss began with 51 students. Today, the program is one of the largest at the university, with just under 1,200 students enrolled.

In its early days, the IMC program took a few plays out of the journalism school’s playbook. The faculty frequently invites successful practitioners to campus to expose students to real-world work while providing networking opportunities with the industry’s best.

Similarly, the faculty places an emphasis on turning classroom theory into practical application.

“We send students out to work with clients in the community,” Fiene said. “We’ve taught campaign classes and we partner with organizations in the community so our kids can put together a full IMC campaign and pitch to clients.”

IMC faculty members also encourage students to engage in the many media opportunities on campus, including the Student Media Center and the program-run HottyToddy.com, where many students get daily multimedia publishing experience.

“These students are very well-rounded – they learn writing, design, market research, campaign building,” Fiene said. “But it’s those real-life experiences students get that matter, so that when they get a degree it’s not just academic. It has real-world relevance.”

Jason Cain, who succeeds Fiene as the program’s leader, is excited about IMC because the future of business, media and communications is all intertwined.

Whether preparing for careers in advertising, journalism or PR, graduates are finding themselves more and more in integrated roles, Cain said.

“This is where the action is in a lot of ways,” he said. “While more traditional departments are grappling with how to address the future within their silos, IMC is ready-made for straddling all these different channels.

Cain, who joined the faculty in 2016 as an assistant professor of IMC, said he hopes to continue to emphasize the practical side of the program by bringing graduates back to campus so that students can see how they are using their degrees in a professional environment.

“I think we have a good core group of faculty with a cool skill set,” Cain said. “I know that we can take a healthy program and start diving in a little deeper. We can take a decade of wisdom and filter that back into the course work.”