A University of Mississippi School of Journalism and New Media student has been crowned the new Miss USA.

Booneville native Asya Danielle Branch, who has studied Integrated Marketing Communication at UM, was crowned the winner of the 2020 pageant Monday night at Elvis Presley’s Graceland during the live competition.

You can watch a video of that moment below.

Branch has studied IMC with an emphasis in public relations and minor in general business at the University of Mississippi, according to her pageant bio. She said she hopes to work for a public relations firm or major corporation.

Debbie Hall, an instructional assistant professor of IMC, said she didn’t teach Branch, but Branch was gracious to be part of her Events class one semester.

“She impressed me as a kind and humble young lady…who is, of course, beautiful,” she said. “She uses her background to support young people who have parents who are incarcerated. Asya represents our school, our university and our state in a beautiful way.”

In her Miss Mississippi USA bio video, Branch talks about an issue that has become part of her pageant platform throughout the years – empowering children of incarcerated parents.

Branch is one of those children. Her father has been in prison since she was 10.

“Being a child with an incarcerated parent takes a negative toll, with the stigmas that surround it,” she said in an earlier UM story. “There’s emotional distress, financial instability and so many questions about why a parent isn’t there.”

She wants to influence people’s lives by speaking at schools, churches, civic organizations and jails.

“It’s an underdiscussed topic, and I hope to bring light to it by sharing my story so others can see that I’m doing something positive,” she said in an earlier UM interview. “It’s perfectly fine to share and embrace the circumstances, because it’s part of who we are and it’s going to shape you. By talking about it, we can take down the gate of judgment.”

You can read her Miss USA bio and watch her bio video here and below.

Having never left the state of Mississippi alone, at age 17, Branch attended Harvard University for summer school, according to her Miss Mississippi USA bio. She said the experience transformed her life and she grew.

Since then, she has accepted every challenge and opportunity. She describes herself as adventurous, compassionate, and a go-getter. “Having a strong mentality has allowed her to be a life coach and trendsetter without second guessing herself,” the bio reads.

Branch is not currently enrolled in the UM School of Journalism and New Media as she fulfills her duties as Miss Mississippi USA and Miss USA, but many professors remember her.

“She was a thoughtful student, who asked good questions, cared about the quality of her work, participated in class discussions and was a team player,” she said. “Her winning Miss USA doesn’t surprise me one bit. She is a determined woman, who knows who she is, and she knows what she wants out of life, and I respect that. I am proud of her for many reasons. This incredible achievement is just one of them. Well earned, well deserved.”

“As you might imagine, she lit up the screen when she was on camera,” Wenger said. “She was a pleasure to have
in class, and I know she will leave her mark on the world. She’s driven and dedicated to being a positive force for change.”

Here are a few more facts from her bio.

Branch has also been involved with the UM Student Activities Association and the Student Media Center. She was a Rebel Radio DJ and co-hosted a 2018 radio show with fellow student Asia Herrod called “A Squared” that featured music, talk and motivational quotes. The two introduced themselves as “Asya with a Y” and “Asia with an I.”

“Asya was named Ole Miss’s Most Beautiful in 2018, an accomplishment that she is very proud of because she had the opportunity to represent the university that she loves,” the Miss USA website reports. “Making history as the first African American Miss Mississippi USA, Asya has been advocating for at risk children and criminal justice reform for the past several years. She has worked with government officials and the President on positively changing our justice system. Asya will continue to encourage our youth and be a voice for the unheard.”

“As Miss Mississippi USA, Asya wants to teach others that they do not have to be defined by their circumstances,” the Miss USA website reports. “Her favorite quote by Randy Pausch, ‘We cannot change the cards we are dealt, just how we play the hand,’ motivates Asya to share her life with others while inspiring them to overcome all of life’s adversities.”

Here are a few more recent headlines and links:

Last month, Asya Branch was just a young woman with dedication and a dream.

Branch, a rising junior at the University of Mississippi, competed in beauty revues during her teenage years, but wanted to try her luck in the Miss Mississippi scholarship pageant.

“I’m the only one in my family that participates in these competitions and my family was not really connected to the pageant world, so at first I didn’t know how to make that happen,” she said. 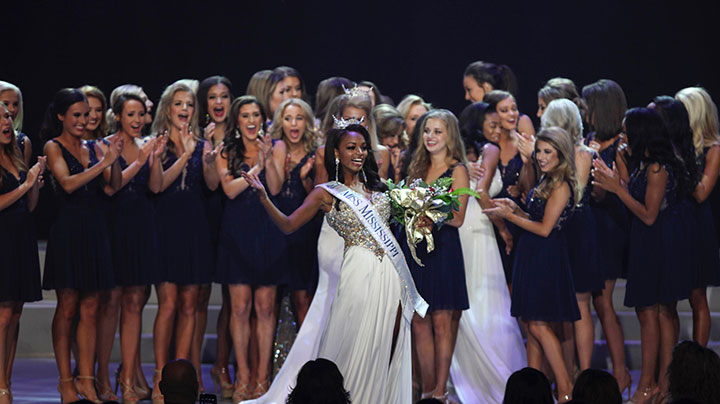 After winning her local pageant and competing on the Miss Mississippi stage for the first time in 2016, the Booneville native was hooked.

“I knew I wanted to return and continue to get better until I won, but I just never expected it to happen so soon,” she said.

On the night of June 23 in Vicksburg, Branch’s name was called and her dream became a reality. She is Miss Mississippi 2018.

“When the last three of us finalists were standing there, there was a calmness that came over me,” she said. “We were all there to win, and I knew it would be fine, no matter what the results.”

Branch said time seemed to stand still before that moment.

“It felt like an eternity before the winner’s name was called, but in reality when I watched it over again, it was only about three seconds,” Branch said.

The feeling of getting to represent her home state on the Miss America stage is indescribable, she said.

“It’s the best feeling I’ve ever had in my life,” Branch said. “I’m still trying to wrap my mind around how my dream is now a reality.”

Her new title also gives her a louder voice to discuss her platform “Finding Your Way: Empowering Children of Incarcerated Parents.”

Branch is one of those children. Her father has been in prison since she was 10.

“Being a child with an incarcerated parent takes a negative toll, with the stigmas that surround it,” she said. “There’s emotional distress, financial instability and so many questions about why a parent isn’t there.”

She wants to influence people’s lives by speaking at schools, churches, civic organizations and jails.

“It’s an underdiscussed topic and I hope to bring light to it by sharing my story so others can see that I’m doing something positive,” she said. “It’s perfectly fine to share and embrace the circumstances, because it’s part of who we are and it’s going to shape you. By talking about it, we can take down the gate of judgment.”

Instead of dwelling on the challenges her family has faced, Branch has turned it into her purpose, providing resources for children that she did not have when she was younger.

“There is no reason for these children to be any less successful than their peers,” she said.

Branch’s father remains one of her biggest supporters.

“He has told me to strive to be successful,” she said. “He sees a bright future for me and doesn’t want me to settle. He wants me to achieve my goals.”

Her continued relationship with her father has led to her creating a love letters program, which provides jails with stationery so prisoners can continue to communicate with their families, mending the relationship between parent and child.

Branch is majoring in integrated marketing communications at the School of Journalism and New Media. She stays involved around campus as a member of the Student Activities Association.

“Asya is an incredible person, and an outstanding representative for not only the University of Mississippi, but the state of Mississippi,” said Bradley Baker, director of the Ole Miss Student Union.

“Whether serving as a member of the Student Activities Association Homecoming committee or starting her own student organization, Empowering Children of Incarcerated Parents, Asya possesses all of the skills needed to succeed not only at the Miss America Pageant in September, but in life as well.”

Branch is a gifted speaker and presenter who lights up the screen when she is on camera, said Debora Wenger, associate professor of journalism and assistant dean for innovation and external partnerships at the journalism school.

“With all that, one of the things that impresses me most about Asya is her dedication to improving the lives of children who have parents in jail or in prison,” Wenger said. “She cares deeply about this issue because of her own personal experience and because she is the kind of person who sees possibilities rather than obstacles.”

On campus, Branch always rose to take on whatever obstacle was before her, so her winning the crown comes as no surprise, said Alysia Steele, assistant professor of multiple platform journalism.

“I know I pushed her in class, and she always met the challenge,” Steele said. “Asya has no problem speaking up for things she believes in, so I could always count on her to give her thoughts and opinions about work we were discussing in class.”

She added that through all Branch has accomplished, she remains humble and grounded.

“She has a warm personality that makes it hard to forget her,” Steele said. “I couldn’t be prouder, because I think she represents our university and state with integrity and grace. I can’t wait to see what she does next.”

Branch continues to stay informed on current events and lead a healthy lifestyle to prepare for the Miss America competition.

“I support this organization and all it stands for,” she said “It gives young women the confidence to be successful and thrive in life.”

She said the competition allows women to form bonds with other competitors while simultaneously learning to be more well-rounded individuals.

“There was so much I gained from competing that I didn’t even know was possible,” she said. “I feel like I can conquer the world.”

The Miss America pageant is set for Sept. 5-9 in Atlantic City, New Jersey. The final night of the competition will be televised at 8 p.m. on ABC.

“We’re going to just have to hope for an unprecedented tie for the title,” Wenger said. “Either way, you can bet the Meek School’s TVs will be tuned to the Miss America pageant on Sept. 9.”

The story was written by Christina Steube for Ole Miss news.