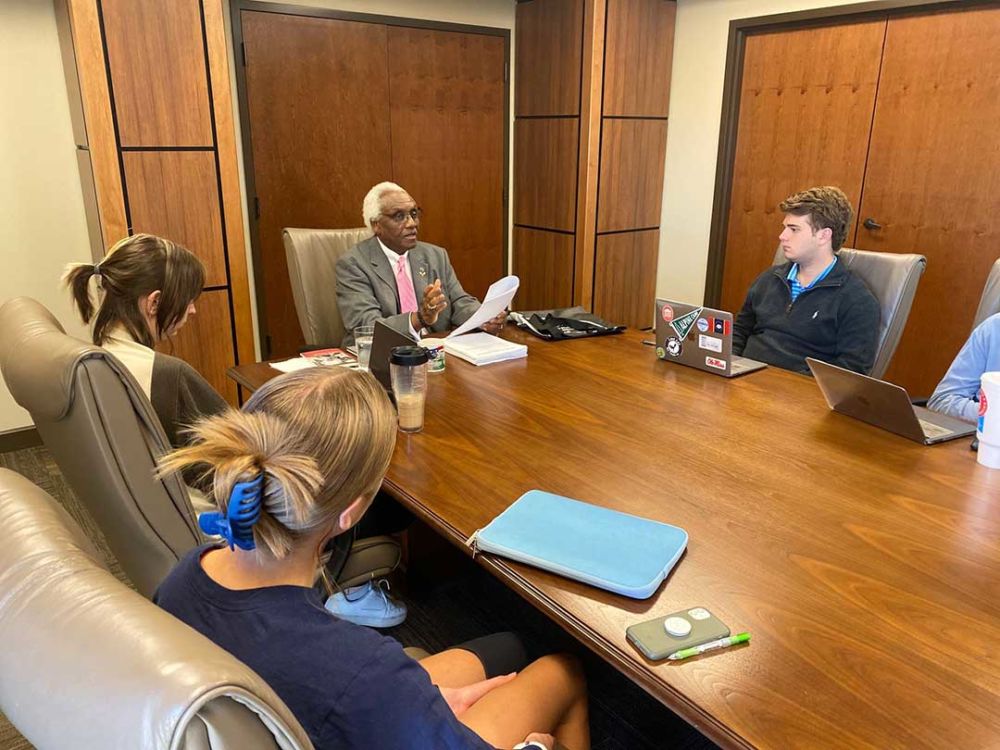 Leslie-Burl McLemore speaks to students in the Honors class.

University of Mississippi (UM) students are being challenged to delve deeper into complex issues about the university and state thanks to a special Honors College class designed to explore important topics 60 years after James Meredith’s enrollment as UM’s first Black student.

“I would describe this class as an open dialogue about the past, present, and future of both the university and the state as a whole,” said McKenzie Cox, a journalism and political science double-major from Concord, North Carolina, who is planning to pursue a career in broadcast news reporting and policy analysis.

“I enjoyed learning about the history of the university and the events of 1962, but hearing about modern policy issues in the state, including the fight for Medicaid expansion, the Jackson water crisis, and the welfare scandal is equally impactful and relevant.”

In 2012, UM’s Sally McDonnell Barksdale Honors College offered a course called “Opening a Closed Society” that coincided with the 50th anniversary of James Meredith’s 1962 enrollment. It examined Mississippi’s segregationist era, the civil rights movement, the impact of the Meredith case, and strides UM had made to increase diversity.

This fall, the Honors College offered HONORS 399: The University and the State, 60 Years After the Crisis. Veteran journalist Curtis Wilkie, who retired from teaching at the UM School of Journalism and New Media in 2020, returned to teach the class.

His leadership was fitting because Wilkie was a senior at UM during the events of 1962 that led to a deadly riot on campus and the deployment of thousands of U.S. troops to ensure Meredith’s enrollment.

Students in the class have been exploring Mississippi’s past and present. Topics have included brain drain, race relations, and legislative initiatives, as well as government policies that could impact future generations.

The class has also welcomed guest speakers. Cox said having Mississippi Today journalists Adam Ganucheau and Anna Wolfe speak about the welfare scandal and the Jackson water crisis was special.

“As a journalism major, I was, of course, excited to hear about their reporting,” Cox said, “but I learned even more about how important it is to ask the questions that matter in order to make sure that people in our state have access to critical information needed to make decisions for themselves…

“When I walk around campus, I can now see the history and key events that have taken place all around me that shaped the future of our nation.”

In a recent class, guest speaker Leslie-Burl McLemore, 82, took a seat at the head of a long table of students with Wilkie at the other end and shared observations about the state.

McLemore, a civil rights activist, educator, and politician, once served as a field secretary for the Student Non-violent Coordinating Committee and as vice-chairman for the Mississippi Freedom Democratic Party, according to his bio published on the Midwestern State University Texas website.

Originally from Walls, Mississippi, McLemore earned a Bachelor’s in Social Science and Economics from Rust College, a Master’s in Political Science from Atlanta University, and a Ph.D. in Government from the University of Massachusetts at Amherst, the bio reads.

“I made a decision a long time ago when I was away in graduate school and living in other places that I would come back to Mississippi, and I would remain in Mississippi because I wanted to see Mississippi change,” said McLemore. “That is a strange kind of loyalty in a place where you were treated as a second-class citizen … But on the other hand, you still have this loyalty – you want to see changes made. We have come a very long way, there is no question about it, as a state, we have, in spite of the difficulties …”

“We have more Black elected officials in Mississippi than any state in the union, but it reflects the population that we have,” he said. “But most of us served in capacities where we really don’t influence basic decision-making because all of the statewide elected officials now are Republicans. And that is going to change over time, but it is going to take a while. It’s going to take greater participation by African Americans …”

You can find a list of those who have been elected to statewide offices in Mississippi here.

McLemore helped found the Fannie Lou Hamer National Institute on Citizenship and Democracy in 1997. He also served as a member of the Jackson City Council for a decade and as interim president of Jackson State University.

“We have made incredible progress,” McLemore said. “We have freedoms that people don’t have in so many other countries. And I fought too hard and put my life on the line years and years ago to see us turn back the clock. I don’t want to see that happen, and I hope you don’t either.

“So get out there and work your butts off. Register to vote. Urge your roommates to vote and become active when you graduate from Ole Miss with this great degree. Go to law school. Go to graduate school. Get married. Build a picket fence. Be involved in your community, whether it is in Montana or Mississippi.”

Kat Moorman, 19, is enrolled in the class. A biology major with a minor in environmental studies, Moorman is passionate about wildlife conservation, particularly amphibians, and would like to attend graduate school to study environmental conservation with an emphasis on herpetology. 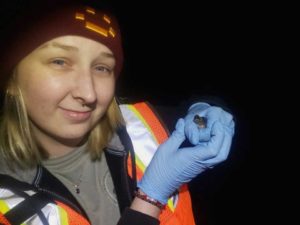 Kat Moorman, 19, is majoring in biology with a minor in environmental studies.

“Hearing the history of the University of Mississippi and its issues with the integration crisis from someone who was present during this time has been incredibly rewarding,” she said. “I’ve thoroughly enjoyed everything we’ve discussed so far, but one of the most complex and pressing issues we have discussed is that of ‘brain drain’ in Mississippi.

“Seeing that I, myself, have strong opinions on the topic, it has been fruitful for me to hear others’ educated opinions on the matter. That statement applies to every topic we have discussed as a class.”

Moorman said she was aware of the basic history surrounding the university, but she has enjoyed studying issues more in-depth.

“While these topics can be controversial, knowing what is going on in our state government is something I also believe is critical in order to better understand national and even worldwide issues.”

Hannah Harris, 21, is a senior accountancy major from New Albany who plans to complete her master’s degree in taxation at UM, then work in tax accounting for a firm.

“This class has opened my eyes to the political corruption within this state, and how many of our government officials refuse to embrace the progress that this state so desperately needs,” she said. “Before taking this class, I was not very ‘in the know’ about politics, especially Mississippi politics, but now, I feel as though I am more knowledgeable on why things are the way they are in Mississippi and at Ole Miss.”

Harris said she is intrigued to learn more.

“I am encouraged to look more deeply into the issues amongst this state and to root for change,” she said. “As we live 60 years after the integration of Ole Miss and James Meredith, it is evident that progress has definitely been made, but there is, without a doubt, a lot more work to do in bettering our state and school.”