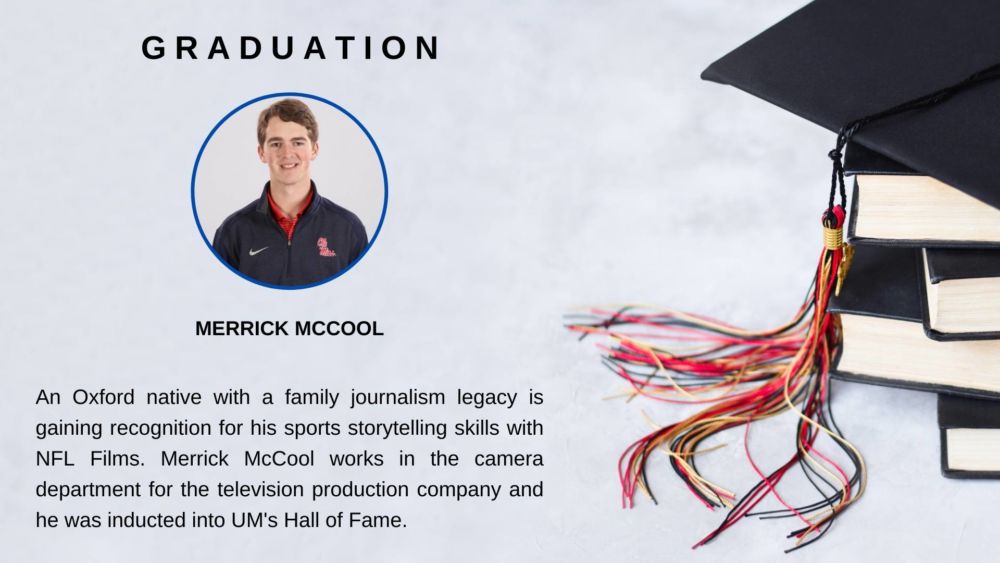 An Oxford native with a family journalism legacy is gaining recognition for his sports storytelling skills with NFL Films.

Merrick McCool, a University of Mississippi senior, works for the National Football League’s film and television production company that produces commercials, television programs, feature films and documentaries. He is just one of the school’s 2022 graduates who shared his Journey to Commencement.

“I think a lot of my childhood memories would center around Ole Miss athletics,” said McCool, a UM School of Journalism and New Media integrated marketing communications student who was also inducted into the Hall of Fame this year. “That, for one, kind of set me right in a field of athletics, right now, working for the NFL.”

McCool had many hobbies growing up, including theater, music, photography and film. He was involved in film festivals from an early age, and his mother, Leighton McCool, bought his first camera.

“He is our most passionate child,” she said. “He’s so creative. He’s got a great eye, which is what he’s doing with his film work now. He’s also extremely musical. At the age of 2, he would sit in the back seat when we would drive over from Atlanta. We would have music playing, and he would be beating on his car seat to the beat of the drum.”

Merrick McCool may have been inspired to become a journalist and storyteller by his grandfather, Curtis Wilkie, a notable author, reporter, and former UM professor.

“Journalism has kind of always been a part of my upbringing,” McCool said.

Storytelling is something he’s been focused on since age 8.

“For Christmas that year, he asked for a film camera,” Leighton McCool said. “You know, basically like a director’s camera, like one of those huge, put over your shoulder, kind of cameras. So we bought him a huge one, real expensive at the time, but a nice director’s camera.”

Merrick McCool worked with Oxford High School’s broadcast journalism team as soon as he could, serving as the sports production director and producer.

“There’s a really good journalism program at Oxford High School,” McCool said, “so I was kind of introduced to that at a pretty young age.”

“You’re learning a lot from stories and experiences,” he said, “and you’re gaining experience in the school. There’s so many opportunities to do that, so many creative people around you, that it’s just hard not to.”

Scott Wyant, a producer and director for Ole Miss Sports, has worked with McCool.

He said Merrick is someone who never settles.

“No matter the task, he’s always going to push the limit to do the best work possible,” Wyant said. “He’s always in search of the next storyline, no matter when he sees it or where it takes him. As a sophomore, he dropped everything on a Friday night, hopped in a car and drove to Tupelo within minutes of hearing about a team meeting with the potential of a big payoff.

“That’s Merrick though. If he sees a story, he’s going to go after it full speed and, frankly, he lives life that way, and that’s why he’s going to be successful in whatever he decides to do. He’s relentless every single day.”

McCool said attending UM led him to his current job in the NFL Films camera department.

“Basically, the idea behind NFL films, when it was created, was to bring Hollywood to football,” he said. “A lot of people don’t know what NFL Films is. There’s an assumption that it’s kind of just football, and there is a lot of football involved with it – obviously, a lot of shooting football games on the weekends. But aside from that, we produce, I wanna say, probably 25-30 TV shows and feature length documentaries, a lot of which are scripted and not 100 percent football-related.”

Through his work, McCool has been given amazing opportunities and experiences, such as working on popular TV shows and meeting celebrities. He even attended the Super Bowl this year in Los Angeles.

His advice to journalism students: Get work experience while you are in school. And you have to love what you do.

“You’ve got to be able to get out and try new things and experience a lot while you’re at Ole Miss, or wherever you’re at doing journalism,” he said. “There’s so many opportunities set forth before you, wherever you are, and so a lot of people just kind of sit back, and they’re like, you don’t think about working until your done with college, but you’ve got to go out and learn things while you’re there that aren’t what you’re learning in the classroom.”

This story was written by Ally Bryan.