Dandridge, a broadcast journalism graduate and lawyer, is member of Now & Ever fundraising committee

Kimbrely Dandridge — a member of the Now & Ever Steering Committee and a native of Como, Mississippi — credits her Ole Miss experience with helping her develop grit and fearlessness. Those traits propel her to seek new experiences and strengthen her leadership style. Dandridge earned a degree in broadcast journalism from the University of Mississippi before attending law school.

The Now & Ever campaign is a $1.5 billion UM fundraising initiative powered by decades of outstanding teaching, research, health care, service and innovation. 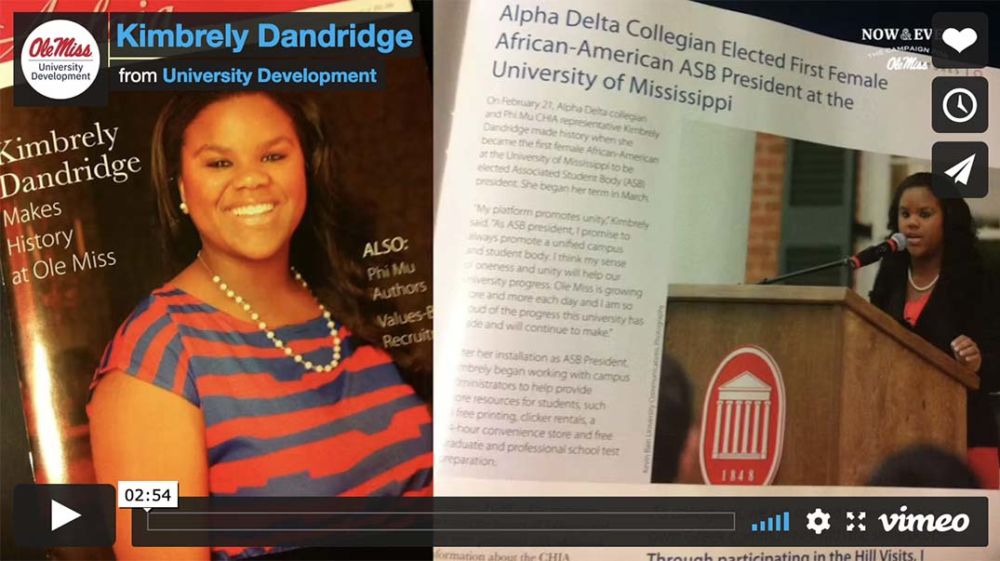 Link to Video about Dandridge and the Now & Ever campaign.

Dandridge is currently associate corporate counsel at Amazon, according to her LinkedIn bio. Prior to joining Amazon, she served as counsel/director in the global legal department at Gap Inc., and provided legal counsel to the family of brands including Old Navy, Athleta, Gap, and Banana Republic.

In addition to practicing law, Dandridge is a published writer and has contributed to publications like Forbes, Teen Vogue, Hechinger Report, and The Well. While in law school, Dandridge completed an internship at the White House, under the Obama administration, in the Office of Presidential Personnel.

In 2012, Dandridge was elected to serve as the first African-American female student body president at the University of Mississippi, according to her LinkedIn bio. She has been honored on several occasions and has received several awards including University of Mississippi Hall of Fame, Diversity Activism Award, Women in Leadership Award, NPHC Achievement Award, and Because of Them We Can Award.