The sky’s the limit for Justin Lee Gary, an integrated marketing communication (IMC) student who attends the University of Mississippi’s Tupelo campus and works as a media intern for Tupelo Regional Airport.

The New Albany native is just one example of students at UM’s regional campuses who are using the versatile IMC degree to pursue their dreams.

Gary, a junior, has a knack for writing and film that began while attending a community college.

“I started working with the film class and really gained a niche for filmmaking,” he said. “My classmates worked on professional film sets with famous actors and professional film crew from all over the country. It was exciting to take someone’s story, turn it into a script, and then watch it on the big screen.” 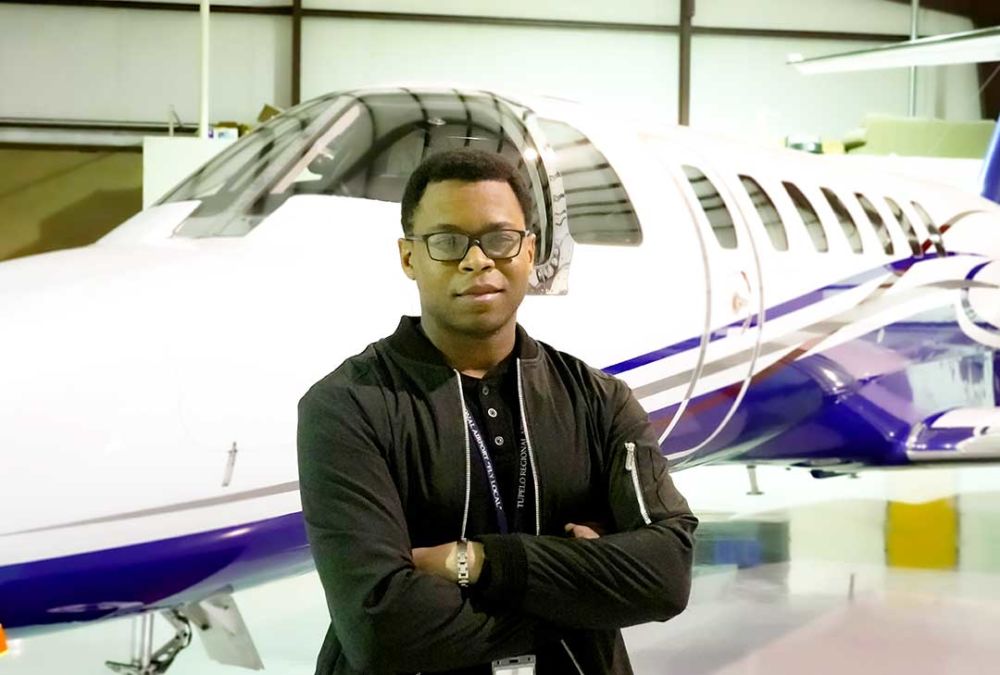 Justin Gary stands in front of a plane at Tupelo Regional Airport.

Gary said an instructor there told him about the University of Mississippi School of Journalism and New Media’s IMC major to further his studies.

“It was the best decision I’ve ever made,” he said.

“While there is a lot of writing with some of the classes, it is by no means difficult,” he said. “The instructors on campus are amazing at teaching the concepts in a way that you can understand them. They really help you explore your creative side so you can find your own writing style. So, don’t be afraid to express yourself. It not only helps you to stand out, but also find an awesome job.”

Gary has two jobs at Tupelo Regional Airport. While one is in airfield operations, he also works as a media intern for the airport.

“I also help coordinate Ole Miss’s sports teams when they are traveling with Delta, United, or another airline,” he said. “Believe it or not, the job actually has a lot to do with marketing. In aviation, public perception is everything. It involves a lot of research and planning to understand what market the airport caters to, and my IMC classes have definitely taught me how to carry the airport’s mission statement through social media and other mediums.”

After graduating, Gary said he hopes to work as a media manager or art director for a marketing firm.

“My dream job would be marketing a major airline like Delta or United,” he said, “but I would honestly be happy working for any company that tries to benefit others.”

His advice for anyone thinking about majoring in IMC is to develop an interest in writing, and never stop being you.

Patricia Overstreet-Miller, an instructional assistant professor of integrated marketing communications with the School of Journalism and New Media who is focused primarily on the regional campuses, said regional IMC graduates have entered a wide variety of job fields, including digital and data management, marketing for nonprofits and local companies, sales, entrepreneurship, public relations for small and large firms, and have even worked for the U.S. Army.

“Because the skills they gained with an IMC degree are highly transferable, they are able to move within a number of different fields, even as they stay local,” she said. “The IMC degree is one of the most flexible and adaptable offered at the university level and is well suited for individuals who want to stay within the state, as well as those able to move nationally and internationally.”

Overstreet-Miller hopes more students who are considering pursing a degree like Gary will visit the regional campuses.

“At the regional campuses, we have some students who are the first in their families to graduate from college, who often come from more rural areas of the state, and who are deeply Mississippi-based,” she said. “They are also highly diverse and representative of many of the minority populations of the state.

“By reaching beyond Oxford, Ole Miss has benefited communities and individuals they might not otherwise have reached and thus helped ensure a stronger future for the state as a whole.”

“Our regional campuses give us an opportunity to work with students who make our integrated marketing communications program richer, more relevant, and more inclusive,” she said. “These students are inspiring — often balancing full-time jobs and families — yet, they have the drive to earn a degree and make a difference in their communities. Kudos to them.”

Overstreet-Miller said Tupelo Regional Airport will be one of the UM program’s IMC 455 clients this year and probably next year as well, largely because of Gary.

“They are looking to brand themselves and become more connected to the community,” she said. “This will be one of the most interesting and challenging clients we’ve had so far.”