Fans of the hit AMC television series “Mad Men,” a show that chronicled the lives and culture of advertising executives working on New York City’s Madison Avenue in the 1960s, may be interested to learn this piece of trivia. Show creator Matthew Weiner has said the BBDO advertising agency inspired the show’s fictional company, Sterling Cooper & Partners.

Kirsten Flanik, president and CEO of BBDO New York, shared the “Mad Men” connection this week during a presentation at the University of Mississippi School of Journalism and New Media. BBDO (short for Batten, Barton, Durstine and Osborn, a merger between two companies) is mentioned several times in “Mad Men” as an agency competitor.

Flanik and Oliva Dames, vice president and director of agency marketing for BBDO New York, spoke to an audience inside the Overby Center auditorium last week about the global presence of BBDO Worldwide. It’s one of the largest advertising agency networks in the world with more than 15,000 people in 289 agencies across 81 countries. 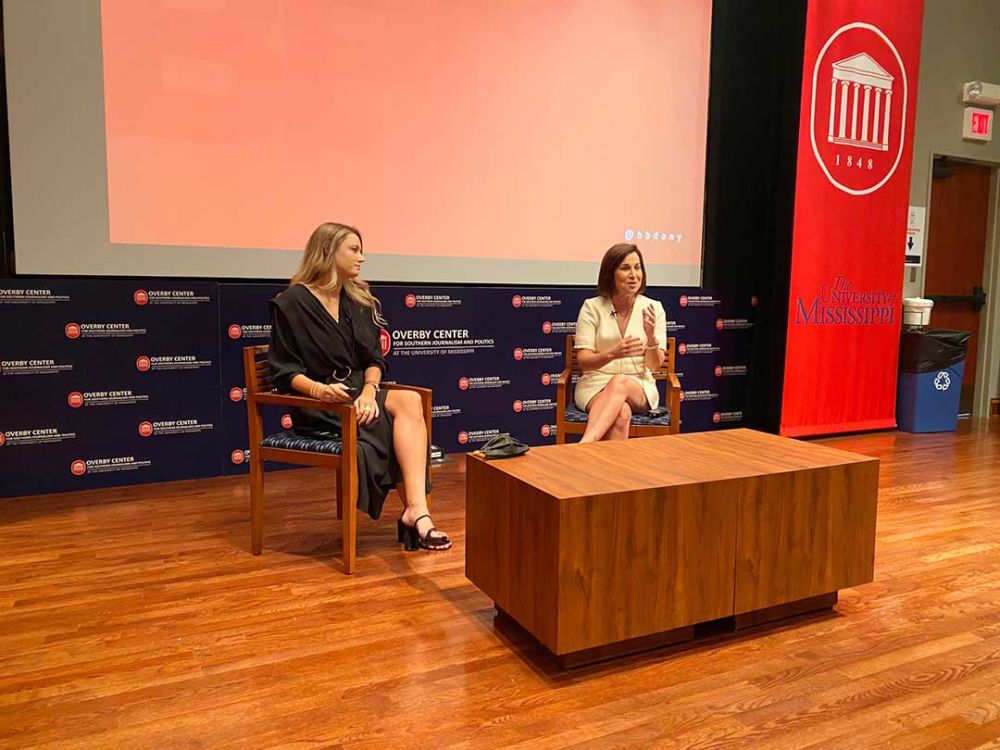 Flanik said her role is to shape the direction of the agency with a focus on people, “The Work” and innovation that drives client growth. She has 30 years of advertising experience and has spent 15 with BBDO.

During that time, she was named by Ad Age as a “Woman to Watch” and one of the “100 Most Influential Women in Advertising.” The New York Business Journal called her a “Woman of Influence” and Adweek deemed her one of the top “female disruptors” in advertising. The 1989 graduate of the University of Florida was also selected as an Alumni of Distinction. A native of Arcadia, Florida, she currently resides in Brooklyn with her husband and their two children.

Flanik worked at an ad agency in Florida before moving to Chicago to cut her teeth on some of the biggest brands in the industry, including United Airlines. Then she landed a job at BBDO New York and has remained with the company. She said she entered the business as advertising was coming out of the “Mad Men” era. For a while, there was a standard business model.

“We advertised for a very specific medium,” she said, speaking of television commercials. “That was what we did 24-7. We were scriptwriters. We were storytellers. We were out to captivate people’s attention in a very simple way. It was a time when media budgets were very large. You would run a certain spot over and over again to put into people’s heads that this is the only brand that you should be thinking about.”

“I’m sure none of you even probably have a TV,” she said. “You might have one to watch big sports games or big screens to do what we call ‘appointment TV’ to watch things like the Oscars, or to watch the Golden Globes, or certain sporting events.”

But Flanik said most content today is viewed on two devices, an iPad or smartphone, which means viewers can be anywhere at any time digesting content.

“So for somebody like me that entered this business off of a very specific playbook, I’ve had to completely rethink how I lead, how I hire, how we go to market, how I communicate with my clients, how I understand their business needs.” 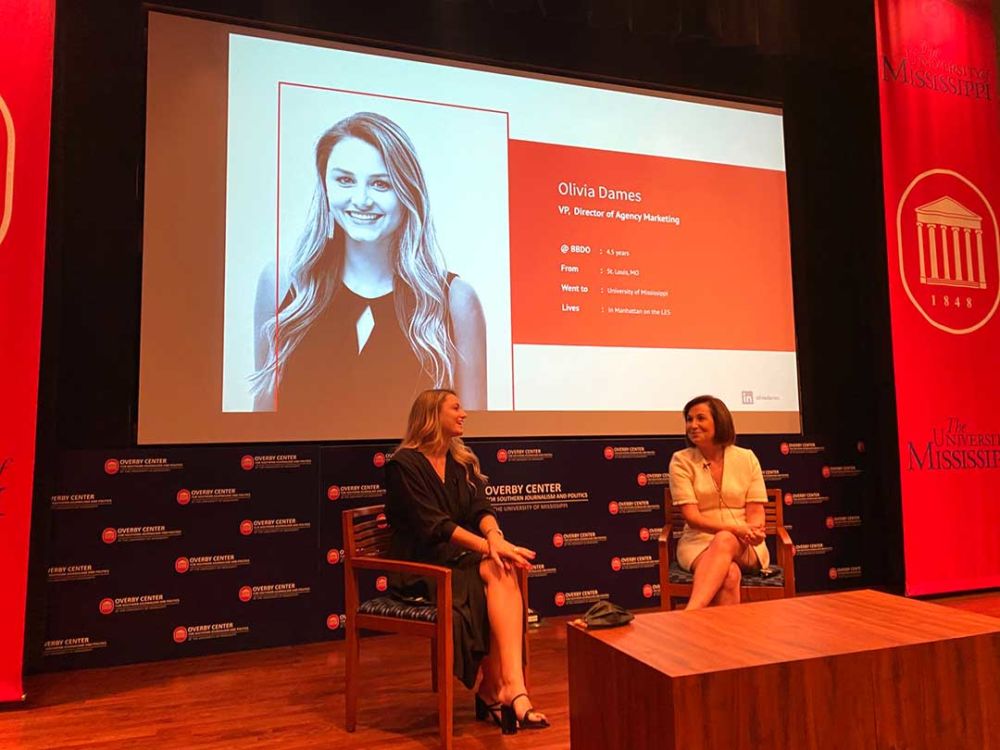 From left, Oliva Dames, vice president and director of agency marketing for BBDO New York, and Kristen Flanik, president and CEO of BBDO New York, speak to an audience inside the Overby Center auditorium. Dames graduated from the University of Mississippi with a degree in business/commerce and minors in marketing and French.

Flanik said she’s also had to bring in new voices, like Dames, to keep up with changing times. The 2017 UM graduate, who earned a degree in business/commerce with minors in marketing and French, has helped score wins for BBDO from some of the world’s largest brands, including Ford Motor Company, The Home Depot and Facebook.

Dames said she was hired out of college to work for BBDO, starting in accounts management as an assistant account executive working on the M&Ms account before transitioning to business development. Her latest role is a hybrid between business development and agency communications.

“It’s getting in front of the potential clients,” she said, “and it’s really talking about what we do, what we stand for, who our people are, our culture, all of those things.”

Flanik said data is the most important driver for their work.

“We can see the way you shop, behave online, the way you scroll, what you click on, and it’s creepy,” she said. “And sometimes you think your phone is listening to you. That’s because it pretty much is. That’s why you’re served the content that you’re served. And that’s our job now is to drive that type of business change for our clients. So ‘The Work, The Work, The Work’ – this is kind of our mantra.”

One of the company’s biggest challenges is understanding and adapting to social media. People are no longer looking at one screen. Companies are trying to create different ways for customers to experience a brand. BBDO leaders are now teaching people who have been writing scripts for 30 years how to understand things like TikTok and use it in brand advertising.

“We’ve been so focused on craft and so focused on superior content that we’re having to actually unlearn that behavior,” she said, “because what we’re learning is the things that actually get traction on the platforms that you’re all on – sometimes the higher the quality, the lower the interest.”

Flanik said working in advertising is about “reading the nuances and figuring out how to really build consensus across the whole team with a lot of people who aren’t always on the same page.”

“We’re constantly evolving, constantly changing,” she said. “There’s never just one way of doing something. You have to keep the cement wet is what we say.”

An example was a pitch for The Home Depot. Company leaders didn’t want to change their advertising strategy, so BBDO kept things the same at the company’s request, but they felt that something was missing. As a team, the agency decided to do things differently, even though they were told not to, and company leaders loved it.

“The CEO said, ‘Thank you so much for your bravery and for doing what I asked you not to do,” Dames said. “…We ended up winning, which was amazing. It’s a huge piece of business for us. They put out more work than almost anyone … and we won because we didn’t let the cement harden. We didn’t stay in that box that they put us in.”

Flanik said it’s about listening to clients and understanding their needs.

“Sometimes they don’t know what they need, and you have to show them,” she said. “Most of the time, clients are scared to take risks. They have their own KPIs (key performance indicators). They have things that they need to deliver. And if they put themselves out on the limb, and it doesn’t work, it can be detrimental for their business. 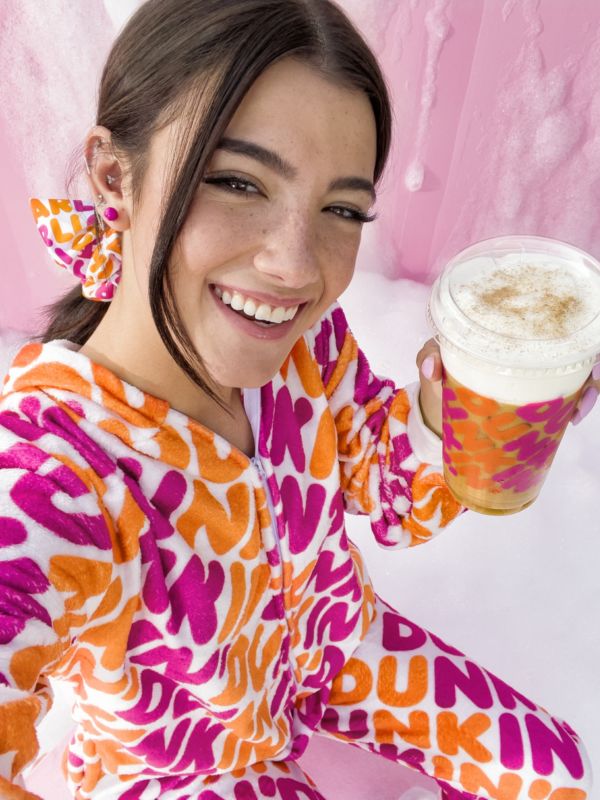 Charli D’Amelio and her Dunkin’ drink from the Dunkin’ website.

A recent example is Dunkin’: America’s Favorite, Coffee, Expresso and Donuts collaboration with TikTok star Charli D’Amelio, a company BBDO has worked with for many years that has typically drawn older customers. When it comes to coffee, Flanik said younger consumers have opted for Starbucks or independent coffee houses. BBDO wanted to attract a younger audience, so they partnered with D’Amelio.

“She’s one of the most popular people on TikTok,” Flanik said. “She has an enormous following. One of the things that our creatives spotted is that she loves coffee. She has a special coffee, and she actually got that coffee at Dunkin’. So she was talking on TikTok about Dunkin’. This is exactly the group that we wanted to reach.

“So we reached out to Charli. We decided to propose to Dunkin’ that we wanted to use her. And we were going to name her coffee, The Charli. So we put The Charli on the menu. You have to understand — for companies to actually make a menu change .. that changes the board. That’s got to go up in every single store across the country. It’s a big deal. They decided this is something that we needed to do. They agreed. And this has been a game-changer for Dunkin’ and getting in a younger crowd.”

Flanik said The Charli drink, a Dunkin’ Cold Brew with three pumps of caramel and Sweet Cold Foam and cinnamon sugar on top, resulted in a 6 percent increase in app downloads, hundreds of thousands of poll results, and 250 plus million users on TikTok. D’Amelio also took over Dunkin’s social media channels.

Flanik said she’s also learned a few things that guide her as a leader. One is you can view a problem with negativity, or you can approach it with a positive outlook.

“The only way that you will get to the best work is if you look at what’s going on, and you all together say, ‘How are we going to solve this? How are we going to make this better?’ And you get your energy around solving that problem …  That’s what advertising is. Advertising starts with solving a business problem.”

It’s also important to show up each day with positive intent, Flanik said.

“This is probably (needed) more so than ever because we live in a world where everybody wants to find what’s wrong,” she said. “Everybody can immediately take you down in our world right now.”

Flanik also talked about current events that have impacted the world and business, such as the death of George Floyd, who was murdered by police in Minneapolis, and how the company approached the issue with positive intent by hiring a chief diversity officer and donating money to causes and organizations, such as Black Lives Matter.

“They were so incredibly positive,” she said. “And every single day, when I would walk in all the way to the security guard down on the bottom floor, to the people who would greet me to go get chemo — I actually liked to go in there because they made me feel so good about myself. So I’ve learned the power of (positive intent) throughout my career, but I’ve also learned it on a personal basis, going through a health crisis, of how powerful it can be. We live in a tough world. I think positive intent is really important.”

Flanik, who is BBDO’s first woman CEO, said her last piece of advice is don’t be afraid to use your voice.

“I always pushed myself through the door,” she said. “I always made sure I had a seat at the table. But I realized that it wasn’t fair to a lot of women during my time who didn’t necessarily have my personality traits. I look back now, and I see that I think a lot of women got left behind … Embrace who you are. Be your authentic self.”