In Memory of Mykki: School of Journalism faculty and staff celebrate the life of coworker Mykki Newton

The University of Mississippi School of Journalism and New Media faculty and staff are mourning the loss of a longtime journalist and employee whose kindness will be remembered.

The Huntsville, Alabama native had recently retired from the school, where she worked as a producer, director, writer, videographer, editor and camera equipment manager. She assisted students, staff and faculty with their creative work.

Professor Joe Atkins said Newton was a special person who brought a world of experience to her craft.

“She could be so funny with her tales of monster movies and her cats,” he said. “I always looked forward to her posts on Facebook. I told her one day I really wanted us to get together sometime so she could tell me about her days in New York studying and working with stage and screen legends. We never got to have that conversation, and I regret that. She’s going to be missed by a ton of people.”

According to Newton’s IMDB bio, she studied at both The Lee Strasberg Theatre Institute and The Actor’s Studio in New York City. With more than 30-years of professional experience as a broadcast journalist, actor and filmmaker, she was an award-winning journalist, producer and director. Prior to her journey at Ole Miss, she was a news anchor and reporter at several TV stations, including WATN in Memphis and WAFF in her hometown.

“She was a bright spot on my Facebook feed… a steadfast, supportive friend since the day we met at Ole Miss,” he said. “… We shared a past in the broadcast industry and a love of classic movies and obscure pop culture.”

Professor Ellen Meacham has known Newton since they worked together in the UM public relations department in 1993.

“Little known fact — I talked her into taking her first cat, Gracie, when I found a kitten I couldn’t keep,” she said. “She always was full of wit, intelligence and compassion. And so, so good at the craft of storytelling.”

Meacham said Newton was one of the most courageous people she has ever known and “an incandescent soul.” 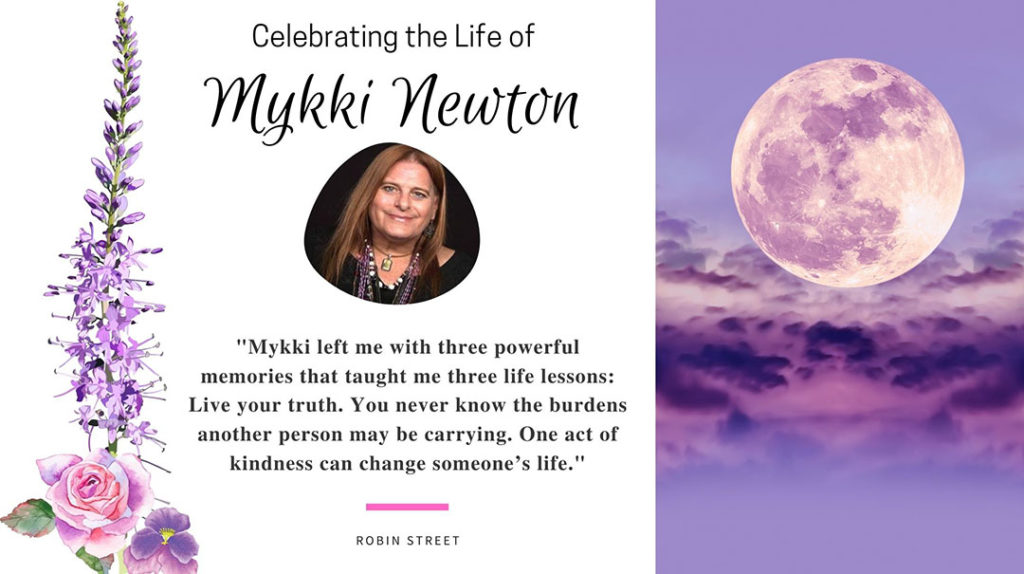 Robin Street, who recently retired from her position as senior lecturer with the School of Journalism and New Media and is now an adjunct professor in the school, said Newton was her friend of 30 years and a bright spot in her life.

“Mykki left me with three powerful memories that taught me three life lessons: 1. Live your truth. 2. You never know the burdens another person may be carrying. 3. One act of kindness can change someone’s life,” Street said.

Street first met Newton when she was Mike Newton, working as the Ole Miss broadcast PR specialist in the early ‘90s. They became friends and worked together on a few projects. Street said she was impressed that Newton had once worked on a soap opera.

“Then several years later, I began to notice that Mike was losing a lot of weight and growing his hair long,” she said. “I’ll never forget the day I bluntly asked, ‘What is going on with you?’

“That’s when I learned that Mike had long been miserable, as he struggled with hiding his true self from the world. He told me that he was finally setting free the feminine Mykki.

“I had really liked Mike, but I adored Mykki. It was as if this delightful, joyful and creative person had been trapped inside. Mykki was able to express all the joy in her new life that Mike had not been able to.”

Street said she is grateful that several years later, Newton came to work for the School of Journalism and New Media. For many years, their offices in Farley Hall were across the hall from one other. They shared a love of the color purple, and Street loved Newton’s fashion sense.

Another poignant memory of Street’s was when Newton helped her and a group of students create a video celebrating diversity that used Lady Gaga’s song ‘Born This Way,’ with Street dressed as Gaga.

“Mykki devoted hours of her own time on a Friday night to film the video, then more hours over a week or so editing the video so that it looked professional,” she said. “That video and Mykki as videographer went on to win an award from the Public Relations Association of Mississippi.”

Other faculty shared remembrances and memories as well. Nancy Dupont, professor of journalism who officially retires from the school in a month, said, “Mykki was a kind, amazing woman.”

Alysia Steele, associate professor of journalism, describes Newton as one of the most thoughtful and giving people she has ever met. She was “always willing to help others and share a story along the way,” Steele said. “Mykki had a quick wit and wicked sense of humor … Mykki’s love and tenderness for her cats said plenty about her humanity and philosophy of life – she had a kind and gentle soul.”

Steele said she’d often stop in to ask what Newton was creatively working on.

“Honestly, Mykki never said a bad thing about anyone, and always tried to find a positive outlook in life,” she said. “I wish more people were like her – our world would be a better place.

“She will be sorely missed, and it breaks my heart that she’d just retired, for she was looking forward to this new chapter in life. I know many of us were happy for her because she deserved time to do whatever she wanted in retirement.”

“Once in your lifetime, you meet a genuine, honest person who is determined to shed away any and all hypocrisies and be themselves,” Husni said. “That is how I will always remember Mykki, from the day I met her, to the day I offered her a job at our school, to the day she retired.”

Mark Dolan, associate professor of journalism, describes Newton as “one of the most human, human beings” he’s ever known.

“Warm-hearted, unselfish, professional, honoring living things everywhere – she adopted my parents’ cat, Maggie, after my dad died in 2010,” Dolan said. “Yes, I’ll miss someone who honored life so, who was positive.

“Once, I gave her tickets to see Kris Kristofferson in Biloxi after my plans fell through. Turned out she couldn’t go either, but told me a just a few weeks ago how she’d framed those tickets and hung them on the wall. You gave us a piece of your heart, Mykki.”

“When I came to the school several years ago and met Mykki, I understood that school leaders valued inclusivity and the Golden Rule,” Rucker said. “Mykki’s presence taught those she encountered the concept of treating others the way you would have them treat you because she lived that ideal through her kindness.

“We shared a love of animals, nature and films, and I will miss her comments about those things in my newsfeed that is now less colorful. When others can truly be themselves, they make those around them feel like they also have the liberty to be accepted for all of their attributes, flaws and humanity. Mykki changed the world around her by teaching us, through her actions, that each person is worthy of kindness and respect.”

Deb Wenger, interim dean and professor of journalism, said that Mykki’s impact will live on.

“In her kind, giving way, Mykki demonstrated to a generation of students that we are all just people. We all deserve to be treated with respect and we all have much more in common than we have differences. She was more important to our school than she probably, ever knew and she will be greatly missed.”

Plans for a memorial service are in progress and the school will share the information widely when details are firm. Street summed up the lessons Mykki Newton learned and taught to many.

“I’ll end with a line from ‘Born This Way,’ that seems hauntingly appropriate now: ‘Don’t hide yourself in regret. Just love yourself, and you’re set.’ I am so glad that Mykki was able to accomplish that goal.”