Dr. Nancy Dupont, a University of Mississippi School of Journalism and New Media professor of journalism, was named the winner of two distinguished awards this week.

She is the only person to ever win the Association for Education in Journalism and Mass Communication – Electronic News Division’s two most prestigious awards in the same year.

The announcement was made at the end of the Broadcast Education Association News Division meeting yesterday by awards chairs Hub Brown and Bill Silcock. Dr. Dupont will be honored by the division at the annual AEJMC-END social (following the business meeting) on Aug. 5, 2021.

Here is a video link of the announcement:

The Edward L. Bliss Award for Distinguished Broadcast Journalism Education is presented annually by the AEJMC – END. The award recognizes an electronic journalism educator who has made significant and lasting contributions to the field. 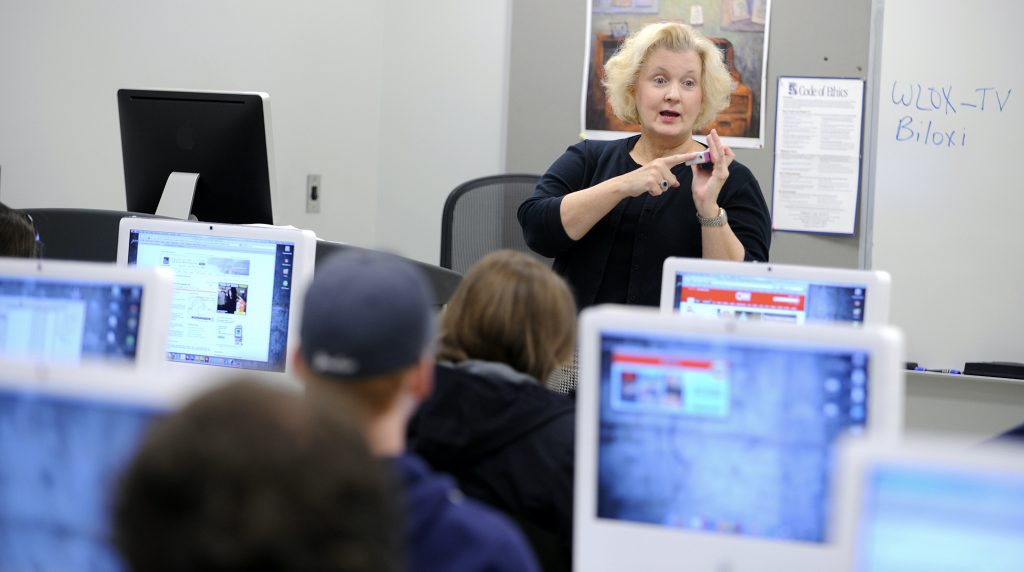 Dupont joined the UM School of Journalism and New Media in 2006 after spending 17 years as a broadcast journalist and 13 years as a journalism educator. She has served as chair of the Radio-Television Journalism division (now Electronic News) of the AEJMC. She has served twice as chair of the news division of the Broadcast Education Association. In 2019, she was elected to a two-year term to the Broadcast Education Association Board of Directors.

Dupont co-authored the book “Journalism of the Fallen Confederacy” in 2014. She has authored 12 book chapters. She frequently presents her research at the Symposium of 19th Century Journalism, the Civil War, and Free Expression and at the Transnational Journalism History conference. She has published extensively about 19th-century Mississippi and Louisiana newspapers.

Dupont earned a Ph.D. from the University of Southern Mississippi in 1997.