Thanks to WREG-TV in Memphis, NewsWatch Ole Miss has a new set for its newscast.

Wes Pollard, creative services director at WREG-TV News Channel 3, worked in December and January with Steven Miller, Student Media Center broadcast engineer, to complete the project. Pieces of the WREG desk were taken apart, delivered to campus, and then reassembled in the NewsWatch Ole Miss studio.

WREG installed a new set at its Memphis studio last year and generously offered furniture from its previous set to the University of Mississippi School of Journalism and New Media and the SMC. WREG General Manager Ron Walter was happy to see the desk go to a good home. 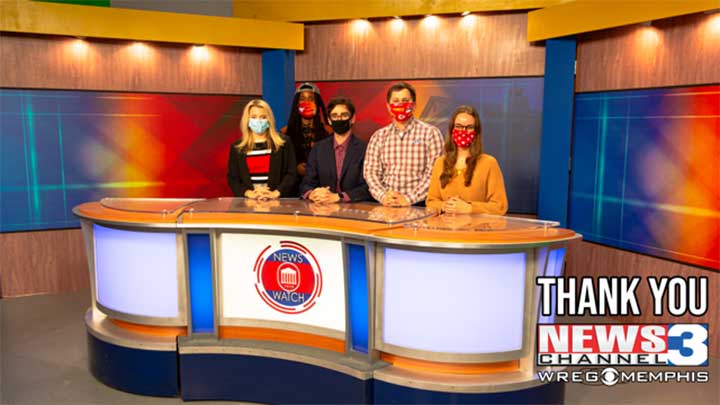 “We are proud to support the aspiring young journalists and broadcasters in our area, knowing we may one day work alongside them,” Walter said. “The desk served our anchor teams very well, and we hope it does the same for University of Mississippi journalism students.”

In spring semester 2021, the newscast is aired on Wednesdays and Fridays. You can learn more about NewsWatch at http://www.newswatcholemiss.com