Daniel Payne started work this month as a POLITICO Fellow. Payne graduated in May 2020 from the University of Mississippi School of Journalism and New Media. He was in the Honors College, a Taylor Medalist, and editor in chief of The Daily Mississippian, where he led a staff that won national journalism awards. He participated in Lens Collective and had a summer internship at a Washington news website. Following graduation, he was executive editor of The DeSoto (MS) Times-Tribune.

The POLITICO Fellows program offers four journalists an opportunity to work on teams throughout the newsroom reporting full time on politics and policy. The 12-month professional fellowship also includes a robust training component and work on enterprise reporting projects on policy areas with disproportionate impact on underrepresented communities. Upon successful completion of the program, each fellow is invited to a full-time reporting role at POLITICO. 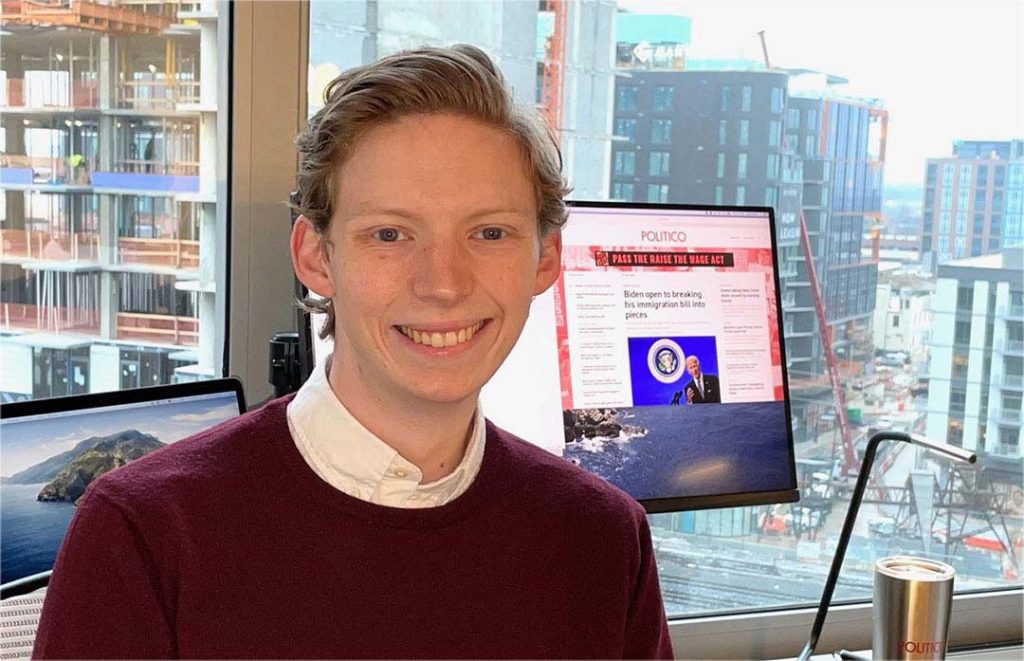 Daniel Payne at his desk in Washington.

“Daniel is foremost a thoughtful journalist who has demonstrated serious commitment to his craft,” said Robin Turner, director of editorial diversity initiatives at POLITICO. “In addition to his solid journalism chops, he demonstrated strong leadership in pushing The DeSoto Times-Tribune toward a digital-first approach as the weekly newspaper’s executive editor. In addition to his compassionate approach to serving his community, Daniel impressed our selections committee with his aggressive accountability reporting on the pandemic, his role in redesigning the newspaper, his work on newsletters, and in his savvy, but responsible social media skills.”

Turner said that Payne, as a graduate of the University of Mississippi who hails from Tennessee, also offers a geographic perspective and background that often go missing in D.C.-area newsrooms. “In short, Daniel is a talented, creative and innovative contributor with fresh insight that any newsroom would welcome.”

Turner, who designed the professional fellowship with the support of POLITICO’s Editor in Chief Matt Kaminski, said that fellows are “full colleagues from Day One.”

“Daniel will be embedded as a reporter on two editorial teams and will learn how POLITICO launches new products. We are pleased that all of our fellows – those who have served previously, and those now serving as professional fellows – know they are respected and valued team members. They also help advance POLITICO’s editorial mission for delivering strong, independent and credible journalism on politics and policy – and with diverse voices and perspectives.”

Grad students Lucy Burnam and MacKenzie Ross caught up with Payne as he started his new job this week and asked him a few questions:

Q. Daniel, why did you apply for the fellowship?

A. I have always enjoyed POLITICO and the work that comes from its newsroom, especially all the work they do innovating digital journalism. When I saw that they would be bringing two fellows on board in January, I knew I had to apply.

Q. How do you feel about being a reporter in the nation’s capital in 2021?

A. I’m very excited about it. I think, especially over the last year or so, people have focused more on the importance of understanding how policies and politicians affect day-to-day life in the U.S. That makes the job of reporting important stories all the more exciting.

Q. How did your journalism and Honors classes, and your work at The Daily Mississippian, prepare you for this fellowship?

A. My experience at UM has been foundational in preparing me for this fellowship. I feel that, though I still have a lot to learn through professional experience, I’m ready to get to work in the world of journalism. The experience I got at The Daily Mississippian has proved to be monumental in my understanding and practice of reporting and editing. I can’t imagine being able to get this fellowship without the real-world education I got at the Student Media Center.

Q. What do you hope to learn from this fellowship?

A. I hope to sharpen my reporting and writing skills, and I also hope to learn about the diversity of opportunities available to someone who wants to report on politics. POLITICO has journalists working in many unique niches of politics and policy reporting, and I think working with different people who have different interests will give me a wealth of perspective on journalism today and my future in the field.

Here is the press release from POLITICO about the new Fellows:

The POLITICO Fellows program, which just began this week, seeks to empower journalists seeking to advance their careers in political and policy journalism. POLITICO is pleased to share that Jonathan Custodio, Anna Kambhampaty, Marissa Martinez and Jonathan “Daniel” Payne emerged from an outstanding and competitive applicant pool impressing the selections committee with their strong journalism skills, entrepreneurial spirit and unique contributions to newsroom diversity.

“The POLITICO Fellows builds on our strong commitment to develop newsroom talent as we deliver authoritative, independent politics and policy coverage with diverse voices and perspectives,” said Robin Turner, director of editorial diversity initiatives for POLITICO. “Our incoming cohort includes four very talented journalists, each with the demonstrated ability to lead teams, innovate and break news even beyond U.S. borders. We are proud of all of our fellows – past and present – and are pleased to partner with the National Association of Black Journalists (NABJ) in identifying and preparing these emerging newsroom leaders.”

The 12-month program will train professionals and provides a unique opportunity to cover the White House, Congress and policy areas such as health care, trade, technology and finance. Reporting opportunities will include in-depth exploration of how key policy issues disproportionately impact underrepresented communities.

“NABJ is proud to partner with POLITICO in creating this critical pipeline of diverse journalists who will become the next generation of political reporters. Now more than ever, it is important that people who represent Black and Brown communities are leaders in reporting on the government and policy issues that impact communities of color every day. We look forward to the dynamic work that will come from the 2021 cohort and extend our support to each of them,” said Dorothy Tucker, president of NABJ.

Participants receive total compensation of $60,000, plus benefits, and are invited for a full-time reporting role at POLITICO upon successful completion of the program. This professional fellowship program also features monthly workshops, mentoring and other training as well as editorial rotations for career exploration. Anna and Daniel begin their fellowships in the POLITICO newsroom this week. Jonathan and Marissa will begin their 12-month terms in June.

Jonathan Custodio brought his Bronx-honed reporting skills to POLITICO in October as an intern in the New York office, where he contributes regularly to New York Playbook and the New York Real Estate newsletter and covers city campaigns. A member of NABJ, Jonathan’s work has been featured in ProPublica’s Electionland and the immigration news outlet Documented NY. A graduate of LaGuardia Community College and Lehman College, Jonathan also served as a reporting intern at The Chronicle of Higher Education and Bronx community newspaper Norwood News. The Pulitzer Center awarded Jonathan a grant in 2019 to do groundbreaking bilingual reporting on Afro Mexicans’ struggle for political, social and cultural recognition, which helped (along with decades of activists’ efforts) lead to unanimous vote by the Mexican Senate to ensure constitutional recognition for the disenfranchised community. Jonathan is a member of NABJ.

Anna Kambhampaty has spent the past year and a half as a reporter/researcher at Time Magazine, and delivered a major scoop– Anna broke the Justin Trudeau brownface story for Time in the midst of the 2019 Canadian election. A native of upstate New York, Anna brings a mix of skills to the newsroom: She studied information science at Cornell University while writing a column for the Cornell Daily Sun, and was an interactive web development intern at CNBC and a UX engineering intern at The New York Times before landing at Time. Since mid-2019, Anna has researched and reported on art, agriculture, politics, and history for Time, but developed a specialty at the intersection of politics, race and identity. Anna is a member of AAJA.

A native of Chicago, Marissa Martinez has already made a name for herself as a newsroom leader and editor in chief of the Daily Northwestern, during a tumultuous year for higher education. Marissa managed a staff of more than 80 journalists and reported on issues of race, health and education for the city, campus and investigative desks at The Daily, which serves as the only newspaper for the city of Evanston, Ill. Marissa, who speaks Spanish and has studied Portuguese and Arabic, created the newspaper’s first diversity and inclusion editor and has been interviewed by the Columbia Journalism Review for her work in newsroom diversity. Marissa currently covers COVID-19 as a reporting fellow for the Texas Tribune. She is a past participant of the POLITICO Journalism Institute and is a member of NABJ, AAJA and NAHJ.

Daniel Payne has worked to push The DeSoto Times-Tribune toward a digital-first approach as the Mississippi newspaper’s executive editor for the past year. He emphasized aggressive accountability reporting on the pandemic and redesigned the newspaper, newsletters and social media accounts. A graduate of the University of Mississippi, Oxford, Daniel was editor in chief of The Daily Mississippian, where he also helped overhaul the newspaper’s website and workflow. Daniel has interned for the Global Post in Washington, D.C., and worked as a reporter and panelist for the Lens Collective researching, filming and editing short films on civil rights activists.