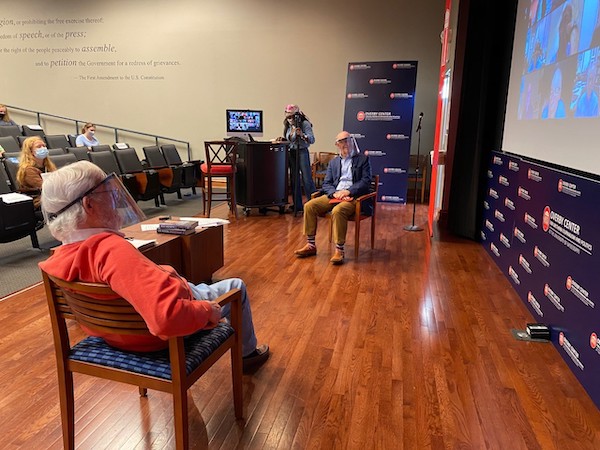 For the past nine years, Profs. Curtis Wilkie and Charles Overby have co-taught a popular seminar in presidential politics and the media. The final class session of this semester marked the end of an era, as Wilkie will retire in December. As a surprise for Wilkie and the students, Overby and Wilkie’s daughter Leighton McCool arranged a star-studded Zoom session featuring some of the most impressive names in journalism.

“It was a moving experience to see colleagues and friends from Jerusalem to Montana Zoom into our class to wish Curtis well. It was like a Who’s Who of journalism,” Overby said. “Curtis is loved by so many people. Their times together brought big smiles on the big Zoom screen.”

The chance to hear journalists like former NBC anchor Tom Brokaw, former ABC reporter/anchor Sam Donaldson and former Boston Globe reporter and editor Ben Bradlee, Jr. share stories about Prof. Wilkie’s decades-long career was inspiring for the students, as was the course itself.

“This class was such a thrill to take, especially with it being an election year,” senior Matthew Hendley said. “Both Wilkie and Overby’s insights and experiences take the class on a fascinating trek through the history of the presidency and the press, supplemented by weekly appearances from politically relevant guest speakers. Prof. Wilkie is one of a kind — I’m sad to see him retire but I am honored to have been a part of his last class.”

The Zoom party included several of Wilkie’s family members, including his granddaughter, Morgan Wilkie, who had a front-row seat as a student in the course.

“It was such an honor to be taught by my grandfather during his last semester as a professor at Ole Miss,” Morgan said. “I remember in high school I would come down to Oxford to visit Ole Miss, and I used to sit in on Charles and Curtis’ class during my visits. I have learned so much from his class, and I love that my peers were able to learn from his wisdom as well. He will be missed greatly.”

Prof. Wilkie, a 1963 graduate of the University of Mississippi, is currently a Fellow of the Overby Center for Southern Journalism and Politics and has been teaching at the university since 2003. Throughout his 25-year career with the Boston Globe, Wilkie covered eight presidential campaigns. “The Presidency, Presidential Elections and The Press,” the course he developed along with Overby (also a veteran of covering American politics), has been popular with students every time it has been offered.

“Curtis Wilkie and Charles Overby were two of the first professors I saw speak at programs in the Overby Center during my freshman year,” student Rabria Moore said. “Honestly, they are two of the funniest people when you put them together, but the discussion was always so informative. I didn’t actually know this would be Professor Wilkie’s last class, but I have to say I’m more than grateful for this experience. It has been the best course I’ve taken at the university, and I’d take it a thousand times over.”

The full list of guest speakers are listed below, along with current or former affiliation:

A farewell Zoom in “The Presidency, Presidential Elections and The Press” course.