School’s Alumni Offer Appreciation of Dean Will Norton, Jr. as He Returns to Faculty 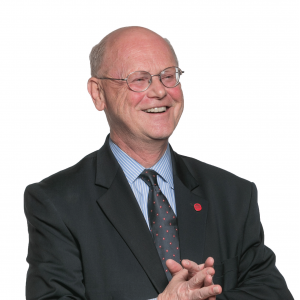 When Dr. Will Norton announced his retirement as Dean of the School of Journalism and New Media after a more than 50-year, highly distinguished career in journalism education, the immediate reaction among longtime friends and colleagues was one of disbelief. After all, Dr. Norton – a spry 78-year-old who seemed to be aging in reverse – is well known for running circles around many of his far younger faculty members, and for being as committed to making corny puns as he is to cultivating a global free press. Starting with his tenure as chair of the Department of Journalism in 1977, and his return in 2009 as the school’s founding dean, it was his high-velocity vision for the school that set the stage, and the pace, for a prolonged period of growth during an era of profound disruption for the entire media industry.

“When I was there, journalism was a sleepy little program in a sleepy little building,” recalled Dick Starmann, who graduated in 1968 with dual degrees in journalism and marketing before going on to lead global communications for McDonald’s for three decades.

“Just take a look at the IMC program and what it is today – that doesn’t happen by accident,” Starmann said. “I wished I’d had that program when I was there. Will had the foresight to realize that, rather than saying ‘We’re a j-school and we’re going to have this singular focus,’ he saw the future. And it’s been a big success for the university.”

Charles Overby, with whom Dr. Norton traveled extensively on behalf of the Freedom Forum and collaborated on the establishment of the Overby Center for Southern Journalism and Politics, says Dr. Norton’s deep passion for journalism, education and a free press has always been fueled by a genuine concern for and interest in others.

“Will probably laughs more and cries more than any friend I have, and it’s because he feels so deeply,” Overby said. “It surprises me that he continues to have that spirit. I think he’s been appreciated as a dean, but in a few short years, he will be seen as the giant that he really is. He knows a lot — but unlike a lot of people who know a lot, he’s willing to listen. And he does listen. I think he sees every person he meets as someone to learn from.”

Indeed, the front office of Farley Hall hosts a steady stream of visitors — whether students, faculty, administration or alumni – many of them seeking an audience with Dr. Norton, whose open-door policy was well known.

“It never seemed to be draining to him,” Overby said. “I believe he gains energy from it…It’s not a chore for him. He draws strength from his passions, and from being around other people. He’s an interviewer –he wants to know people’s story.”

Dr. Norton’s roots as a reporter – he worked for several newspapers, including the Chicago Tribune, before transitioning into journalism education – remained in evidence as he balanced the growth of IMC program with continued respect for traditional journalism values.

“I did not realize at the time there was such a scarcity of African American journalists in the country — I just thought it would be a cool major,” Agnew said. “Dr. Norton recognized, far more than I did then, that it was important that African American students were nurtured and got from the program what they needed to be successful in the industry.”

Agnew credits Dr. Norton with not just launching his journalism career, but for helping him to sustain it for more than 30 years.

“You know, newsrooms can be very, very tough,” Agnew said. “You leave this great man [Dr. Norton], who is always encouraging, and motivating, and pushing you with love — and then you get out into this great big world, and it’s whole lot different. And you say, ‘Oh my goodness, can I survive this?’ And then you call him and you talk to him and he tells you, ‘You know what? Get tougher.’”

Agnew recalled that when he returned to Mississippi in 2001 to serve as managing and then executive editor of The Clarion-Ledger, Dr. Norton was “over the moon.”

“All the investment he had made in me, and now here I was in a position to help, not just Ole Miss, but every j-school in the state — he was very, very proud of that moment. He took this kid from a little town in North Mississippi and he made him believe – he made me believe in me.”

Jesse Holland — former Daily Mississippian editor, AP reporter, and author of “The Invisibles: The Untold Story of African American Slavery Inside the White House,” and the Marvel sci-fi novel “The Black Panther: Who Is The Black Panther?,” among others — echoed Agnew’s sentiments.

“He was the first one who told me he thought I could be a great reporter,” Holland said. “Every job I have ever taken since, I have called and asked Dr. Norton about it first.”

With Norton’s encouragement, Holland got involved with student media, and even when Dr. Norton left UM to become Dean of the College of Journalism and Mass Communications at the University of Nebraska-Lincoln in 1990, he made time for Holland.

“Dr. Norton would call and check up on me, and allow me to call and ask him for advice,” Holland said. “He didn’t just bring me to Ole Miss and then up and leave.”

That personal commitment to students is apparent to alumni such as Leslie Westbrook, who went on to a storied marketing career before she joined the IMC faculty as an adjunct in 2012. She was inspired by what the school’s IMC program might become, and at Dr. Norton’s urging, began to lay the groundwork for building a consumer research center at the school.

“He has so much love and appreciation for the j-school,” Westbrook said. “He wanted to make it the best — he brought so much momentum to it. But it was not just his vision — he really wanted to hear everyone’s vision, and make it something we could all own.”

Now that he’s retiring from his official dean duties, Dr. Norton will turn his focus to what he’s always been known for: fighting for the students.

“That will be the thing I remember the most about Dr. Norton as he goes into retirement [from the dean’s office] — and I find it extremely difficult to say that word where he’s concerned, because, my goodness, he was as full of energy the last time I saw him as he was in 1981 – is just that he truly believes in journalism,” Agnew said. “He believed we needed to put all of Ole Miss’ journalism students into jobs to make a difference in this community, and in the world. I think we can safely say that it’s happened.” 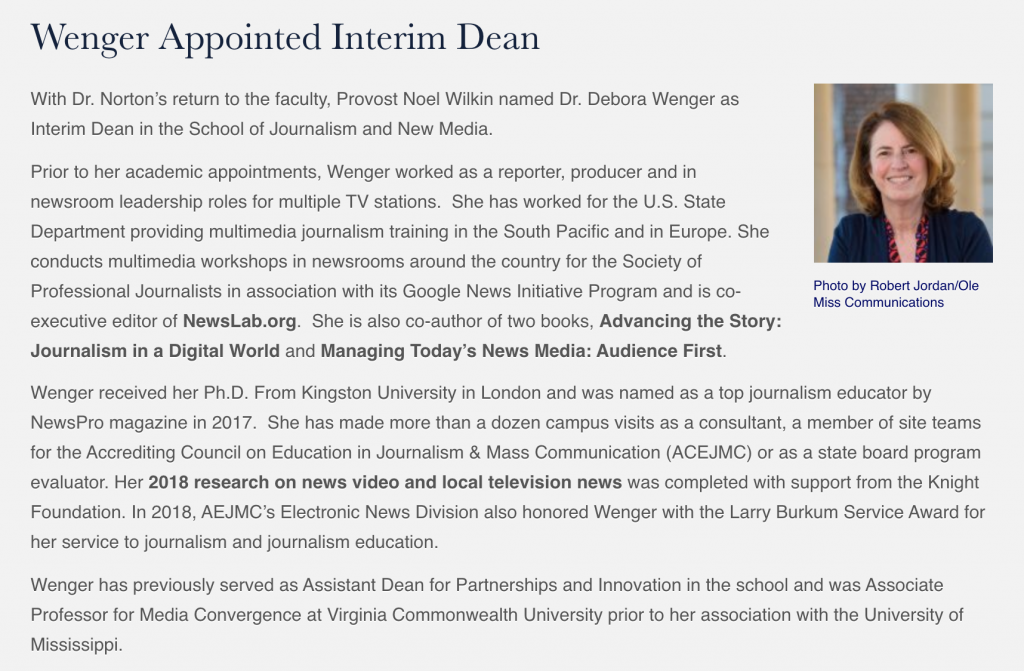