University of Mississippi School of Journalism and New Media graduate Cooper Manning, who, in case you didn’t know, is also part of a famous football family, is the school’s virtual graduation speaker this year.

The school has created a virtual graduation page where you can see his full address to the Class of 2020.

Or if you’re lucky enough to spend five minutes talking to Manning, you can’t help but notice his sense of humor. We asked him what it was like to grow up in a famous family?

“I would say it was exactly the opposite of being a Kardashian.”

Manning said he became a broadcast journalism major after taking a semester of accounting and realizing he didn’t love it.

“I have always been kind of comfortable talking on camera or in front of people,’ he said. “You had semesters where you were behind the scenes and working the camera, and you got to learn a different perspective.”

“While I enjoyed being on camera more, I did appreciate my days as a cameraman. I also liked that there were no set hours around journalism. You could go shoot something at night. There was always action. You weren’t tied to a schedule.”

“After college, I had a radio show,” he said. “A big radio guru had a heart attack and was out of commission. They said, ‘Have you ever hosted a radio show? … You’re hired.’ My fun was always being on the air in some fashion. For me, personally, I think if I had made it a full-time career, it might not be as fun.” 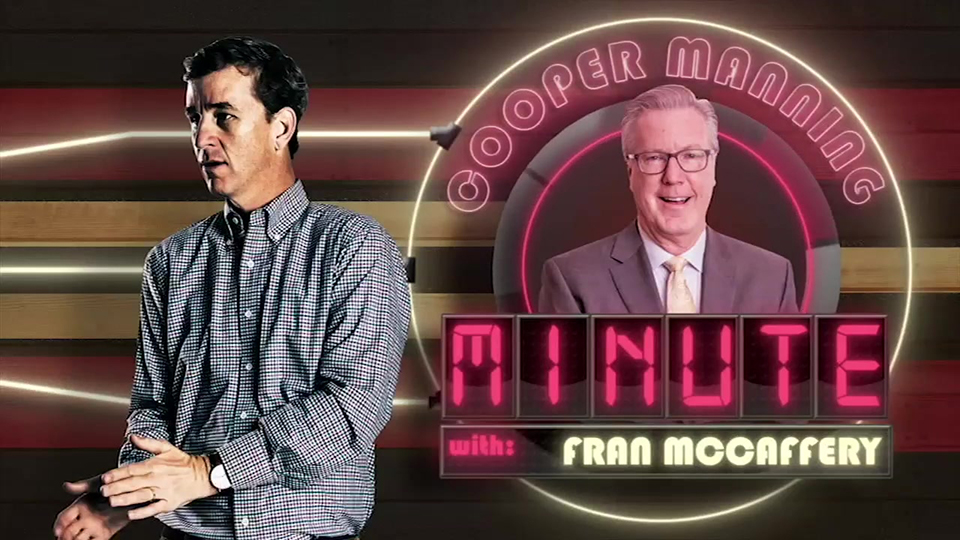 Manning is entering his fifth year as a host for “The Manning Hour” on FOX NFL Sunday Mornings, where his broadcast journalism degree comes in handy. However, in his real job, he is senior managing director of investor relations for AJ Capital Partners focusing on new business development and managing and curating investor relationships. There he has been instrumental in raising capital for Graduate Hotels.

“I have a lot of respect for the guys in the journalism world,” he said. “The hours are different. Those are tough hours. Those guys grind and work.”

He said he hopes graduates will ponder this thought:

“I hope they can walk away thinking, ‘If this no talent clown is doing OK for himself, then I’m going to kill it,” he said. “I was reluctant to accept the invitation just because I still wake up in the middle of the night and have that horrible pit in my stomach that I have a paper due and haven’t done it, and you can’t find the classroom, and you’re late for class.”

“I have really enjoyed the last decade of my life without having papers and homework due, so I guess I wanted to torture myself the last couple of months about what I am going to put down on paper or what comes out of my mouth. I am equally nervous about this and my sociology exam at the end of my senior year, which didn’t turn out so well.”

His advice to young professionals:

“I am a big believer in doing what you like and doing what you are good at,” he said. “Don’t take a job that you don’t like that you’re not passionate about because it’s a good job. There are not that many people in the world who get to come home and enjoy what they have done, so if you can find that, I think you’ve got it figured out.”

For more information about our journalism or integrated marketing communications programs visit jnm.olemiss.edu.

This article was written by LaReeca Rucker.