The Overby Center for Southern Journalism and Politics at the University of Mississippi has announced its spring lineup of programs, including one of the first public appearances by Shepard Smith since he stepped down as the chief anchor of Fox News.

Smith, a Mississippi native, was also managing editor of Fox’s breaking news division. Besides his appearance at the Overby Center, Smith will be returning to his alma mater to receive the prestigious Silver Em award, which is given by the School of Journalism and New Media to a Mississippi-connected journalist whose career has exhibited “the highest tenets of honorable, public service journalism, inside or outside the state.” 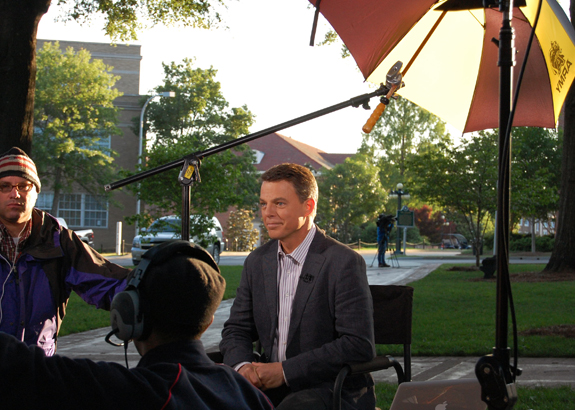 “This spring’s programs offer great conversations with and about nationally recognized experts,” said Charles Overby, chairman of the center. “The audience will also have an opportunity to join these conversations.”

Each event will take place in the Overby Center Auditorium at 555 Grove Loop. The programs are free and open to the public, and parking will be available in the lot adjacent to the auditorium. The spring schedule includes:

Tuesday, February 18, 5:30 p.m. – THE INTERSECTION OF RELIGION AND POLITICS
Two nationally known journalists will discuss religion and the 2020 presidential election with Charles Overby, chairman of the Overby Center.  Terry Mattingly, an Overby fellow and editor of the daily blog GetReligion, and Richard Ostling, former chief religion writer for The Associated Press and former senior correspondent for Time Magazine, have written extensively about religion.

Wednesday, February 26, 5:30 p.m. – “ROBERT PENN WARREN: A VISION”
This documentary by the award-winning filmmaker Tom Thurman offers compelling insight into the life of the acclaimed writer Robert Penn Warren, whose novel “All the King’s Men” is considered one of the great dissections of Southern politics.

Thurman, a veteran filmmaker who has produced documentaries on director Sam Peckinpah, actor Harry Dean Stanton and writer Harry Crews, probes his fellow Kentuckian’s life, work, and evolution on race. Journalism Professor Joe Atkins will lead a discussion with Thurman after the film.

A former editor of the Des Moines Register and now a consultant who writes about the future of journalism, Overholser will discuss how journalists are helping — and hindering – the profession’s role in democracy.

Overholser, who served as an ombudsman with The Washington Post, will be interviewed by Charles Overby and Greg Brock, an Overby fellow. Politics is certain to be part of the conversation since the program comes the day after Super Tuesday.

Tuesday, March 24, 5:30 p.m. – “JOSEPH PULITZER: VOICE OF THE PEOPLE”
Today’s threats to press freedom would be nothing new to Joseph Pulitzer, a leading figure in journalism, who spoke of “fake news” and warned more than 100 years ago that suppression of news threatened our democracy. One of the producers of the documentary, Robert Seidman, will discuss his project for PBS with Overby fellow Curtis Wilkie.Tuesday, March 31, 5:30 p.m. – SHEPARD SMITH COMES HOME

In one of his first public appearances since leaving Fox News, Shepard Smith returns to Ole Miss, his alma mater, and his home state of Mississippi to talk about his career in broadcast journalism in a conversation with Overby and Wilkie. Smith joined the network at its inception in 1996 and is known for his former role as the chief anchor and managing editor of the breaking news division. 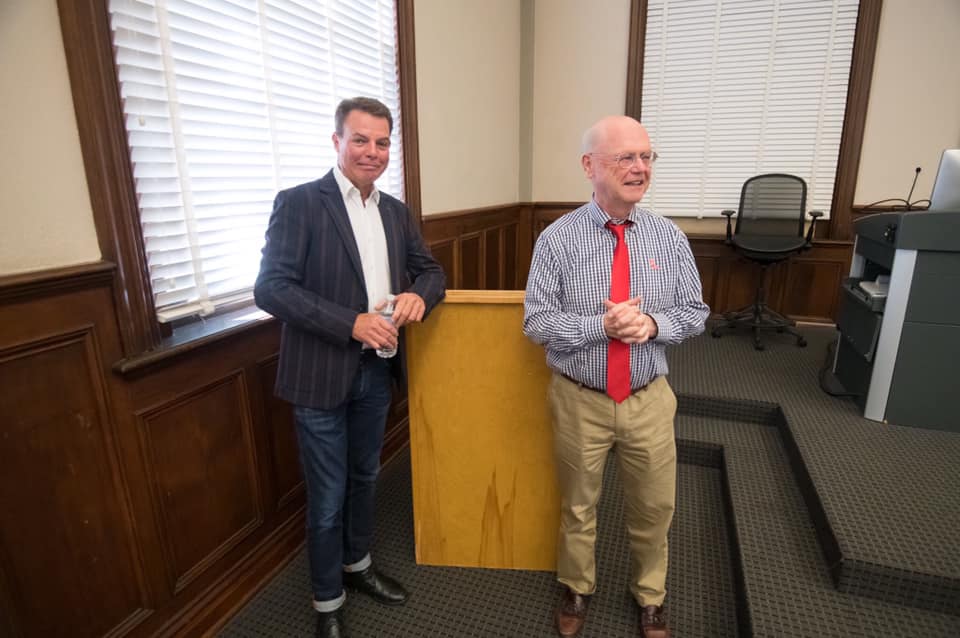 Shepard Smith speaks with students and Dean Will Norton, Jr. All photos on this page are from professors and University Communications.

Tuesday, April 7, 5:30 p.m. – ROBERT KENNEDY’S 1966 VISIT TO OLE MISS
The documentary “You Asked for the Facts” traces Robert F. Kennedy’s dramatic appearance at Ole Miss after law school students invited him to speak in hopes that it would derail former Gov. Ross Barnett’s drive to be elected again. It did, after Kennedy revealed details of the deals Barnett tried to cut with the Justice Department during the James Meredith crisis in 1962. Noted civil rights lawyer Barbara Phillips and a lecturer at Ole Miss’s law school, will discuss the film with the producer, Mary Blessey.