The 1968 University of Mississippi graduate came to discuss the possibility of creating a Chair of Excellence in Investigative Reporting and Opinion Writing with a focus on newspapers, magazines and books. Dickerson also discussed the creation of a James L. Dickerson Literary Trust, making an endowment for the chair. 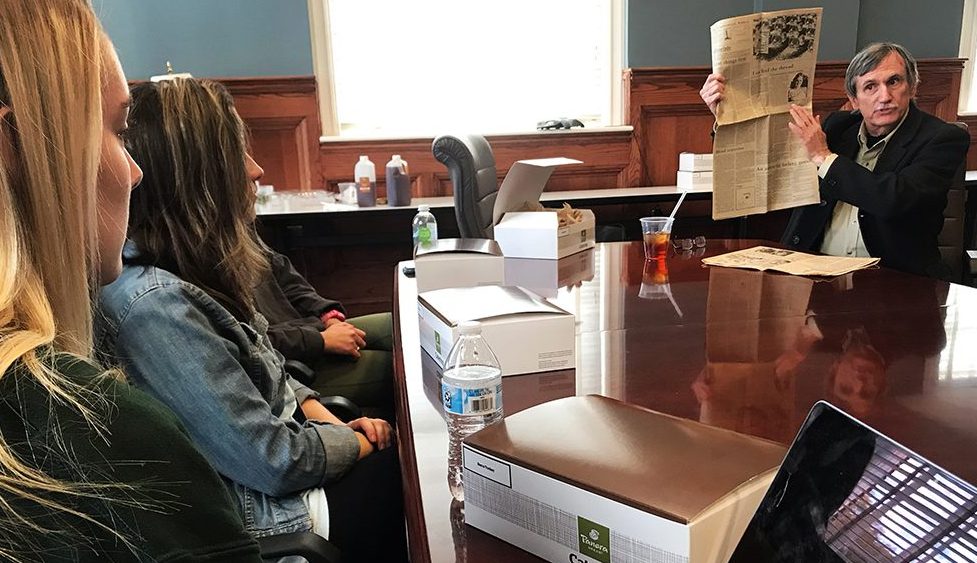 Jim Dickerson, author, journalist, musician, music historian, and alumnus of The University of Mississippi, holds up one of his music columns as he talks with students at lunch in the Overby Boardroom. Photo by Michael Fagans.

Dickerson has authored more than 30 books. He worked as a staff writer and editor at three Pulitzer Prize-winning newspapers—The Commercial Appeal of Memphis, Tennessee; the Clarion Ledger/Jackson Daily News of Jackson, Mississippi; and the Delta Democrat-Times of Greenville, Mississippi.

In the 1980s, he published and edited a national magazine titled Nine-O-One Network that made history by becoming the first magazine published in the South to obtain newsstand distribution in all 50 states and overseas in countries such as the United Kingdom, Spain and Portugal.

The discussion stems from the success of his book Colonel Tom Parker: The Curious Life of Elvis Presley’s Eccentric Manager, an investigative biography.

Originally published in 2001 by Cooper Square Press, Dickerson purchased the book rights two years ago and republished it under his Sartoris imprint.

Dickerson met with staff and spoke during classes with journalism and IMC students.