Four recent graduates and a faculty member have been honored for their public relations projects by the Southern Public Relations Federation.

The 2019 SPRF Lantern Award competition was for work completed in 2018, and the student work was judged along with professionals. The awards were presented Oct. 1 at the SPRF annual conference in Orange Beach, Alabama.

The graduates submitted public relations campaigns produced in Senior Lecturer Robin Street’s advanced PR Techniques class. Each campaign was designed to increase awareness on a topic of their choice.

“The students had to create a complete public relations plan that included researching, event planning, writing mass media materials, creating effective social media and using photography and video and multiple other communications,” Street said. “Their awards demonstrate the excellent training they received in these skills from all the faculty members at the JNM School.” 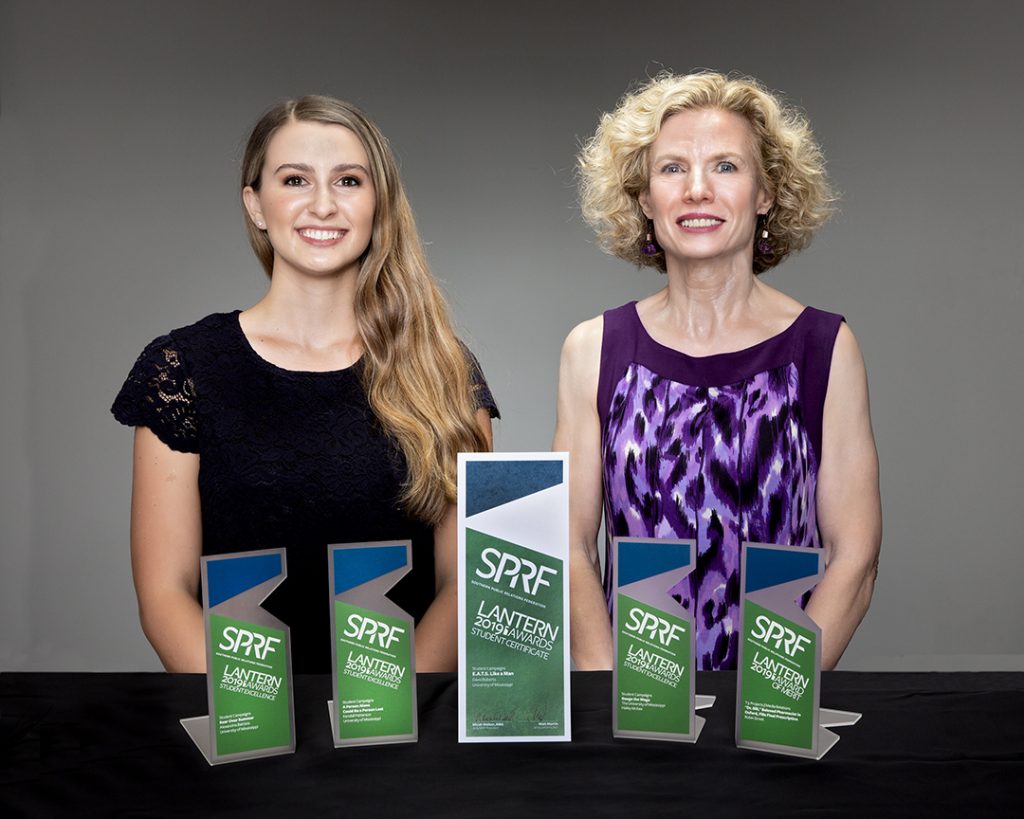 “Once again, our students guided by Robin Street, have won high praise for their outstanding work,” Fiene said. “The fact that these students were judged against professionals in the public relations industry make this all the more special.”

Multiple entrants can win in the same category if they earn the required number of points as scored by the judges. Awards are given at three levels. No awards were given in the highest category, called the Lantern. The Excellence Award is the next highest award, followed by the Merit Award.

Aleka Battista, an IMC May 2018 graduate, won an Excellence Award for her campaign “Soar Over Summer,” designed to increase awareness of the importance of continuing learning during the summer for K-12 students.

“I feel honored to be recognized alongside so many amazing public relations professionals across the South,” said Battista, who now works at Red Window Communications, an IMC agency in Oxford. “The class gave me an in-depth knowledge of public relations through hands-on experience and made me feel well prepared to not only complete a full public relations campaign but to continue on successfully in my career field.”

Hailey McKee, a May 2019 Journalism and Public Policy graduate, also won an Excellence Award for her campaign “Gauge the Wage” to increase awareness of the gender wage gap.

“I was overjoyed to see that I’d won something because it gives validation to the work I am so passionate about,” said McKee, now a public relations graduate student at Boston University. “Ms. Street’s class was essential in learning and incorporating the skills needed to earn this award and taught me so many PR tools that I still use in my graduate class and at my internship.”

Kendall Patterson, a May 2019 Journalism graduate, also won an Excellence Award for his campaign “A Person Alone Could Be A Person Lost,” on the detrimental effects of loneliness and how to overcome them.

“I am blessed to be winning an award,” said Patterson, now a staff writer at the Chester County Independent newspaper in Henderson, Tennessee. “It’s a satisfying feeling to know that the work I did before I even started my career is being recognized on a regional level. The class allowed me to understand the massive amount of research and planning required to complete a public relations campaign.”

Davis Roberts, a May 2019 IMC graduate, won a Merit Award for his campaign “EATS (Emphasize Awareness Trash the Stigma) Like a Man” about eating disorders in men.

“I’m extremely honored to receive an award from SPRF,” said Roberts, now a graduate student in IMC at Northwestern University. “Awards and honors aside, I am just happy that I was encouraged and supported in school while creating a campaign focused on a topic that is so important and personal to me. Ms. Street forced us to step into the shoes of a PR professional by assigning us to create our own campaigns from scratch.”

For more information on the School of Journalism and New Media, visit https://jnm.olemiss.edu/.