There are few principles that journalists hold dearer than the First Amendment, and on the rooftop of the Newseum in Washington, D.C., Ole Miss journalism sophomore Grace Marion was honored for her work in fighting for the fundamental rights of a free press.

Marion won a Hefner First Amendment Award, and in introducing her to the crowd, Washington Post columnist and award judge Karen Tumulty indicated how impressed she was by Marion’s work.

“Many have been asking, ‘Is there even a future for journalism?’ Well, we have an answer in two words – Grace Marion.”

While in high school, Marion was editor-in-chief for The Playwickian, the student newspaper at Neshaminy High in Langhorne, Pennsylvania. In the face of much resistance, she published an investigation into the way the school handled records of sexual harassment and assault complaints against teachers. 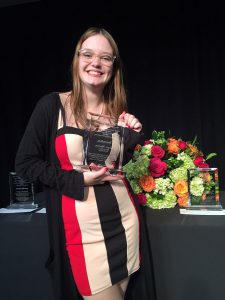 Other award winners included Greg Lukianoff and Jonathan Haidt, who wrote the bestselling book, The Coddling of the American Mind: How Good Intentions and Bad Ideas are Setting Up a Generation for Failure, and attorney Ted Boutrous, Jr., who represented CNN’s Jim Acosta when Acosta had his White House press credentials pulled.

Marion said she was excited to learn about her award, but a bit overwhelmed when she learned who else had won.

“I thought, ‘Oh no, they messed up.’ My work didn’t actually do anything, and that guy got Jim Acosta’s press pass back,” Marion said.

Marion’s parents and Assistant Dean Deb Wenger were in the audience to cheer Marion on. Wenger said the school is proud to have her in the program.

“Grace has the drive and the smarts to do whatever she wants to do,” Wenger said. “I’m just glad she wants to be a journalist and that she wants to learn her craft at our school.”

Marion said her goal is to one day be a foreign correspondent. Tumulty is confident we’ll be hearing more about her in the future.