A University of Mississippi School of Journalism and New Media professor has been recognized for her work to make UM more inclusive for all students.

Alysia Burton Steele, assistant professor of journalism, has been named the recipient of the Vicki Mahan Ally of the Year Award. The award recognizes individuals who have gone above and beyond the call of duty to make the university a welcoming, accepting, and inclusive place for LGBTQ students, faculty and staff.

We asked Steele a few questions about the award. 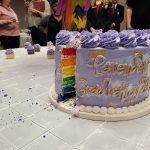 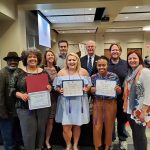 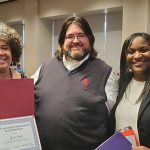 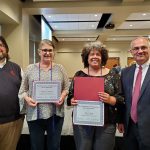 Q. How did you feel when you were named as a winner of the award?

I was surprised and excited by the awards. Kevin Cozart, Deb Wenger, Bobby Steele and Brittany Brown created a fake reason for me to come on campus that day, and I came because I thought Brittany was receiving an award. So, they lied to me – but for a good reason. I had no idea I was nominated, and it’s quite an honor.

Q. For those who don’t know, what is the award?

The Vicki Mahan Ally of the Year Award is an award where faculty members are honored for their contributions and dedication to inclusiveness regarding the LGBTQ community. It appears a former student from five years ago, Sha Simpson, nominated me for helping her stay focused with her studies, and I encouraged her to get counseling. I assured her there was nothing wrong with getting help, and I wanted her to know that I was always going to be there for her.

When her family cut ties with her after she came out, it broke my heart to see her struggling, and after all these years, I can’t believe Sha wrote to Kevin Cozart and nominated me. When I heard Kevin reading her letter, I thought it sounded like Sha, but I wasn’t sure. At that point, I didn’t know the award was for me. I burst into tears when my name was called because the letter was touching, and well, I love Sha like a daughter.

Q. Why were you told you won the award?

I am a big supporter of people being true to themselves – no matter how they identify. I do not judge people based on sexual orientation, race, religion, ethnicity – everything that comes with diversity, I am supporting it. I am biracial, and come from a very welcoming, loving family.

From childhood, my mother Stella Duncan always instilled me in me to accept people for who they are – that we have no reason to judge. I want every student to know that my office is a safe space, and I am always willing to help. That is just who I am as a person, but I’m honored to be recognized for that.

Diversity is in everything I do, so no matter what class I teach, what scholarship I create, what service I pledge, I will always include diversity – it’s what makes this world a better place. So, I’m just going to keep being me.