Journey to Commencement: From the Grove to 30 Rock

This story is part of the “Journey to Commencement” series that highlights University of Mississippi students and their academic and personal journeys from college student to college graduate.

The University of Mississippi senior grew up a bit of a class clown, used his humor as a campaign strategy while running for Mr. Ole Miss, and kept things lighthearted during his time as chaplain for the Kappa Alpha fraternity, a technique that allowed him to break down barriers of communication between himself and his fraternity brothers.

When he graduates in May, Hubbell hopes his ability to make people laugh will blossom into a career. He is a School of Journalism and New Media integrated marketing communications major. 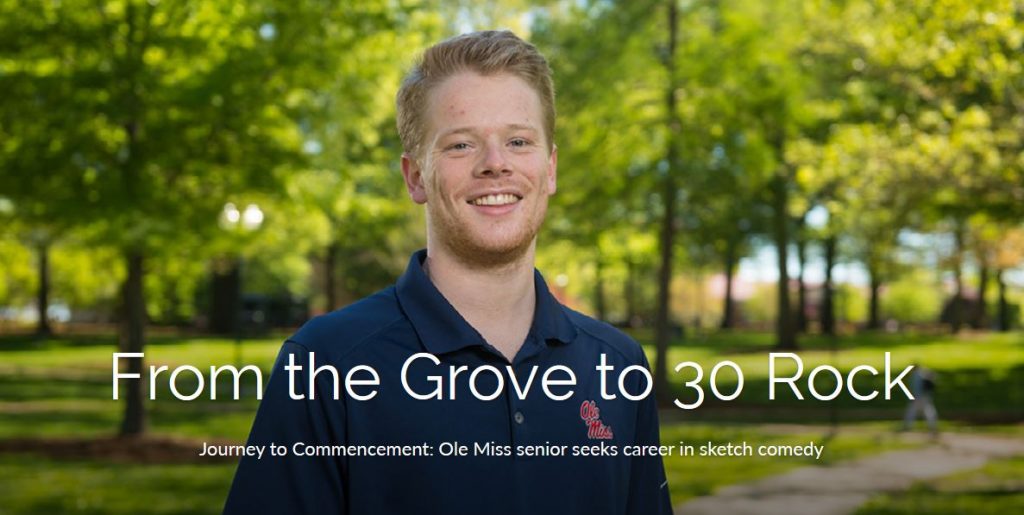 “I want to eventually do comedy writing and perform full time,” he said. “My dream would be to become a cast member on ‘Saturday Night Live.'”

Hubbell laid the foundation of that dream as an Ole Miss student. He had separate internships in New York City, one for “Late Night with Seth Meyers” and the other for “The Tonight Show Starring Jimmy Fallon.”

“Those experiences were incredible,” Hubbell said. “I was getting to walk into 30 Rock (30 Rockefeller Plaza, home of NBC) every day for work. I have watched shows like ’30 Rock,’ ‘SNL,’ ‘Friends,’ all the late-night shows, ‘Seinfeld,’ ‘The Office’ – like, every great show – and I am getting to walk into the building where it all happens.”

To read the full story in the Journey to Commencement series written by Justin Whitmore of University Communications, click this link.