Chris Lawrence and his father spent eight days on the road from Anchorage, Alaska, to Oxford, going through a CD case full of classic rock, telling stories and taking in diverse landscapes on a 4,500-mile adventure to start a new journey as a graduate student at the University of Mississippi.

At the end of the voyage, Chris Lawrence enrolled last fall as an integrated marketing communications graduate student at Ole Miss. Jay Lawrence got to see the town before heading back to Alaska by plane.

“I was able to show him Oxford and Ole Miss a little bit, and that meant a whole lot,” Chris said.

After Chris earned his undergraduate degree in journalism and public communications at the University of Alaska at Anchorage, he decided he would go to graduate school and continue his education in Mississippi. His mother, Kelly Lawrence, lives in Amory, and growing up, he spent summers in the Magnolia State with her. 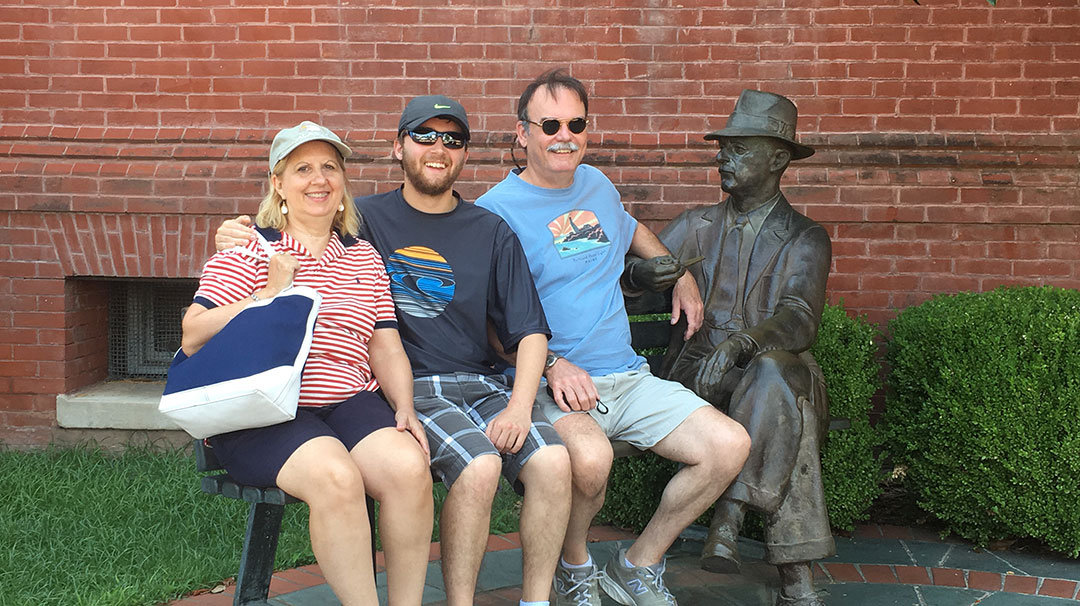 Kelly, Chris and Jay Lawrence take a picture with the statue of William Faulkner upon their arrival to Oxford. Submitted photo

“I thought, well, why not see what Mississippi has to offer so I could be close to my mom while continuing my education,” he said. “I did a little research and discovered Ole Miss had a great IMC program, and decided it was for me.”

Once the decision was made to enroll at Ole Miss, the daunting 600-mile-a-day, eight-day trip lay ahead of the father-and-son team. They stuffed Chris’ Dodge Caliber full of moving essentials and mementos and drove in five-hour shifts each day.

Jay enjoyed the long trip with his son and the ability to spend so much bonding time with him.

“We had a good time,” Jay said. “It was an opportunity to spend more time with him.”

The many different types of landscapes and wildlife between Anchorage and Oxford served as the main source of entertainment for the pair.

“We, unfortunately, didn’t spend a lot of time at places, but we definitely took in the sights and wonders of nature,” Chris said. “Just to be able to have a piece of a place and kind of know a little about what it’s like was nice.”

Lethbridge, Alberta, was a particular favorite.

“We drove through there and saw a 100-year-old steel viaduct and rolling hills all around town,” Chris said. “Lethbridge seemed runner- and biker-friendly, too. It was really, really cool.”

Bozeman, Montana, on the other hand, was bustling with tourists there to take in Yellowstone National Park. Besides the traffic and crowds there, Montana was lovely.

“We went over a bunch of rivers,” he said. “There was also a lot of open areas where you could see nothing but the sky. You could see for miles and miles.”

He enjoyed Montana and British Columbia for the scenery that the two places offered.

“British Columbia had a lot of open views,” he said. “You could see the gorgeous trees, rivers and lakes, so that was really awesome and majestic. We saw six black bears on the side of the road alone through B.C., and about 10 wild horses in Montana.”

To pass the time during the trip to Ole Miss, Chris and his father had conversations about past times and what lies ahead, while jamming out to rock bands such as Pearl Jam and Tom Petty.

Luck was also on their side. The two encountered few problems that slowed them down along the journey. They even said they were always ahead of bad weather.

“Surprisingly, we only saw two or three accidents the entire way so that was good traffic didn’t hold us up,” he said. “I’d say we drove through only 60 minutes of rain combined along the way.”

Once they reached Forrest City, they knew they were close to their final destination. The food was a dead giveaway.

“I had catfish with the bone-in, slaw and baked beans,” Chris said. “So I definitely knew I was home in the South.”

The father-son team was relieved to get to Oxford after that. Before Jay flew back to Anchorage, Chris and his mom showed Jay around Oxford and Ole Miss, which was special to all of them.

Chris is familiar with Oxford because he used to visit the town with his mom during summers.

“I always really liked it,” he said. “I thought it was a beautiful place.”

His mom was relieved the trip went well, and she was elated to see her son.

“When he got here, I was so happy to see him and am so excited knowing he’s at Ole Miss now,” she said.

The Lawrences made unforgettable memories over those 4,500 miles.

“It was one of those once-in-a-lifetime experiences saying you could do a cross-country trek like that,” Chris said. “It was the end of my Alaska chapter and the beginning of my chapter here in Mississippi.”

This story was written by Kendall Patterson of University Communications.