Eleven students from the University of Mississippi School of Journalism and New Media have been selected as UM orientation leaders.

Martin Fisher, associate director of admissions with the UM Office of Admissions, helps lead the orientation leader program. He said orientation leaders are trained to assist new students and their families in transitioning to the University of Mississippi – academically, culturally and socially.

“They lead small groups of new students, serve on panels in front of hundreds of family members, and continue to be a resource to their peers beyond the two-day orientation program,” he said. “The transition process is ongoing, and the orientation leaders are critical to that process. Their service to the Ole Miss community impacts thousands each year.”

Fisher said being an orientation leader is a great opportunity to represent the university and develop transferable skills that students can take with them forever.

“My hope is that they enjoy the process of growing through service,” he said.

Orientation leaders from the School of Journalism and New Media include:

Orientation Leader Susannah Abernathy is an active member of the Delta Rho Chapter of Kappa Kappa Gamma, where she serves on the New Member Committee welcoming incoming women. Although she is an IMC major, she also hopes to attend dental school after earning her undergraduate degree.

“Coming from a small town in Texas, I knew very few people when I set foot on campus for orientation,” she said. “I did not have the same session as my other friends, so I hung out with my orientation leader the whole time. She made sure that I felt welcome here and introduced me to two other orientation leaders who were just as kind to me.”

“I believe that orientation leaders are like the welcoming committee to college,” she said. “They are the first people you meet when you get to Ole Miss, and they want to make you feel as comfortable as possible. Not only are they helping with the transition into college, they also genuinely want to be your friend.

“It is my hope that I can lead the incoming Ole Miss students through an orientation that alleviates their fears about college and leaving home, and prepares them for a very smooth transition into college, academically, socially and emotionally.”

Orientation Leader Andrew Wildman is a member of Delta Psi fraternity at St. Anthony Hall. He is also a big fan of food and cooking. He hopes to attend grad school, earn a doctorate in literature and teach at the college level. 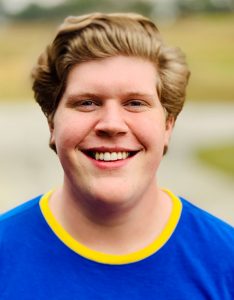 “I wanted to become an orientation leader because of just how much I love Ole Miss,” he said. “I have been a lifelong fan of this university. It’s the only place I toured because I knew it was the only place I could call home.”

Wildman said he is excited to represent Ole Miss as an orientation leader and wants incoming freshmen to be excited.

“I am just thankful for the opportunity to show them that they have a home here in the Ole Miss family,” he said. “… The team is such a diverse representation of students from the university . . . I’m excited about the memories that are going to be made with my fellow orientation leaders.”

Orientation Leader Tavia Moore is a transfer sophomore whose activities include “studying, losing sleep, and more studying.” During her free time, she reads, explores Oxford, and spends quality time with friends. 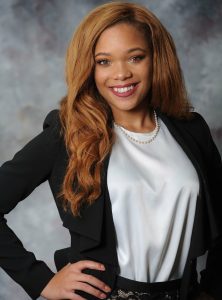 “I don’t have any cliche career aspirations,” she said. “I just want to find a career that makes going to work feel like going to a playground. I want to be able to enhance my creativity while traveling the world and meeting people of all backgrounds and cultures.”

Moore was a student ambassador at her previous college. “My only hope is to build as many relationships within my Ole Miss family as possible,” she said. “I want to be able to recognize people on a first-name basis because I expect to spend the majority of my time interacting and developing those types of relationships with them.” 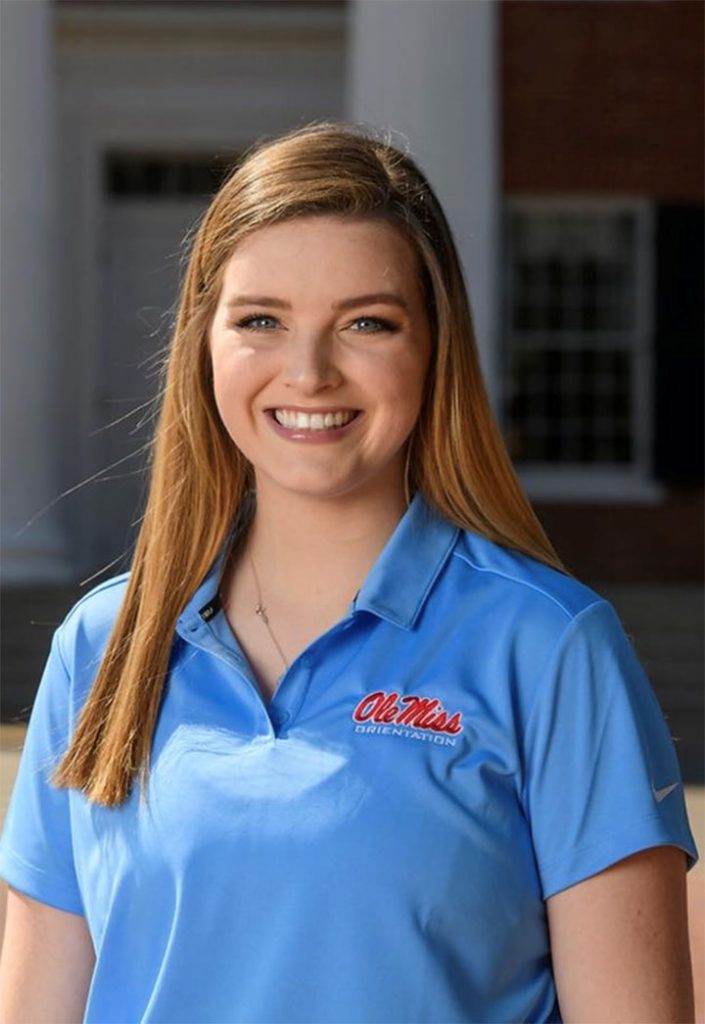 rientation Leader Chloe Dwyer is also an ambassador for the School of Journalism and New Media, an Alpha Kappa Psi Business Fraternity executive member and upcoming vice president, a member of the TEDx University of Mississippi planning committee, a member of the Student Activities Association Special Events Committee, and a Alpha Delta Pi member. She said she wants a career in advertising and graphic design.

“When I originally applied to be an orientation leader, I wanted to feel a deeper connection to the university and its people,” she said. “Ole Miss has a large population, and by holding this position, I knew it would break the population down into smaller groups and open up a new way to form relationships with people in our community.

“I wanted to be an orientation coordinator so that I could continue to take the passion I have for Ole Miss and show incoming students what they have to look forward to. Orientation is so special, and I can’t wait to go through the experience again with new faces and stories.”

Dwyer said she has met some of her best friends through orientation. “These friendships mean so much to me, and I know they will last far past my college years,” she said. 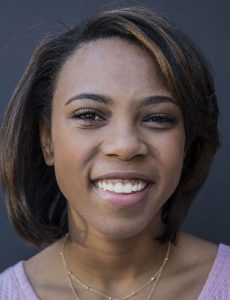 Orientation Leader Asia Harden is a staff writer for the Ole Miss Yearbook, a communications intern at the UM School of Business Administration, and the public relations chair of Lambda Sigma Honor Society.

“The root of why I want to apply to be an orientation leader stems from my growing love for this university, its people, and the opportunities it has afforded me,” she said. “As an orientation leader, I want to give back to this wonderful place that I get to call home and share my love of this university with new students to further ensure them that they can find a home in this place as well.”

Harden said each new experience provides an opportunity for growth. 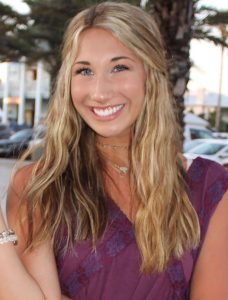 “As an orientation leader, I want to be able to find growth in the challenges, triumphs, and pure joy that comes with the job,” she said. “And I hope that I can be able to lead incoming students down a path of growth as they enter the university as well.”

Orientation Leader Charlie Googe is a sophomore and member of Delta Gamma sorority who dreams of becoming a marketing specialist for Vogue magazine.

“I had an amazing experience when I attended orientation, so I simply want to give other new incoming students the same awesome experience,” she said. “I love this university so much, and I want to also share that love with others, so that they can learn to love it as much as I do.”

Orientation Leader Karsyn King is a junior from Monroe, North Carolina who is earning a dual degree in Spanish and journalism. She is an Ole Miss ambassador, a member of Alpha Omicron Pi Sorority, and an anchor for NewsWatch Ole Miss. Last semester, she interned with Fox 46 Charlotte. She hopes to earn an MBA after graduation and work in the business world.

“I also hope to be able to travel all over the world, but on the top of my bucket list right now is Spain so I can put my seven plus years of language learning to the test,” she said. 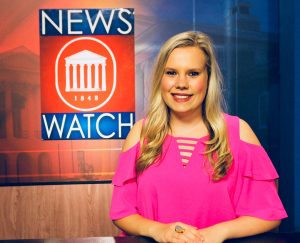 King said she wanted to become an OL to show incoming students the magic Ole Miss offers. “Beyond the beautiful campus, the renowned professors, and the diversity of students, there is something special about the Ole Miss experience that can’t really be told, but rather must be experienced,” she said.

“Coming from out of state, knowing only one person at Ole Miss, I was not sure what to expect. Never did I ever think I would wind up at the University in Mississippi. It was definitely not on my radar until very late into the game.

“Fast-forward three years later, and I have met so many incredible people, have been given amazing opportunities, and cannot imagine myself anywhere else. Ole Miss has given so much to me in the most unexpected ways and has helped shape me into the person I am today. I can only hope to show new students that they have the capability to make their mark and be the change-makers of the future generation. And it all starts here.”

King said OLs are often one of the first people students encounter when coming to college. “The transition to college is scary,” she said. “I hope to be a familiar, smiling face that strives to be kinder than I have to each day, and leave each person I encounter feeling like they are capable of doing anything they put their mind to. After all, we are all family, now and for forever. Once a Rebel, always a Rebel.”

Orientation Leader Nick Weaver is a public policy leadership and integrated marketing communications major. He is an ASB senator, a member of Chi Psi Fraternity, an FLL Greek ambassador, and a member of the Oxford Church of Christ. He plans to attend law school.

“Over the past two years at Ole Miss, I’ve met countless people who have taken me in and helped me feel at home here in Oxford,” he said. “These people include students I met at orientation, fraternity brothers, church members, and professors whose classes I’ve taken. Regardless of how I met these people, they all share a special place in my heart. It wasn’t long ago that I moved into Pittman Hall as a nervous, lonely freshman in desperate need of belonging. 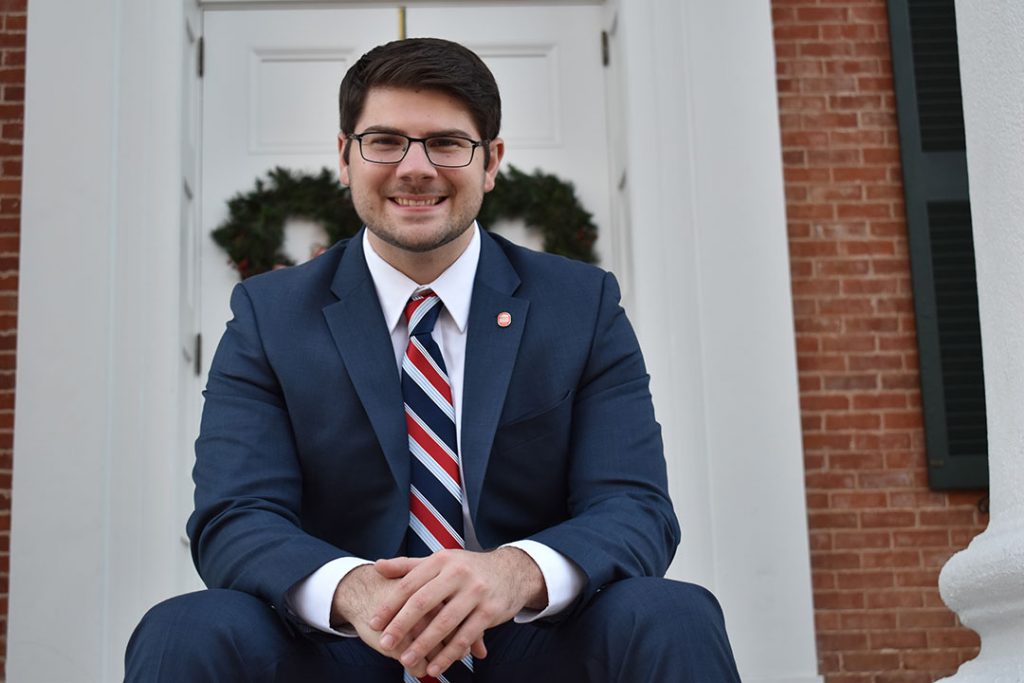 “I’m a religious person, and I distinctly remember sitting alone in Paris-Yates Chapel praying that God would send me friends and mentors who would guide me and build me up. In the months following move-in, I was blessed with more loving people around me than I ever dreamed of. Because of this, I have a debt I need to repay.”

As he transitioned from high school to college, Weaver said he received love from students and staff at Ole Miss. Now, it’s his turn to give back.

“My hope is that, as an orientation leader, I can exhibit the same genuine and kind friendship that I received as a freshman,” he said. “I feel a responsibility to give back to the school that’s given so much to me, and this opportunity allows me to do just that.”

Weaver said he hopes to gain a greater understanding of the diversity of students who call Ole Miss home.

“When we get into our normal routine, it feels like we’re only interacting with a limited group of people on campus, but as an orientation Leader, I have the opportunity to talk with everyone and welcome them to such a fantastic university.”