James Autry signed copies of his new book Mississippi during a reception at 2 p.m. Thursday, Oct. 11 in the Overby Center lobby.

MISSISSIPPI is a collection of 77 poems from James A. Autry’s Nights Under A Tin Roof and Life After Mississippi. The author, a former U.S. Air Force pilot, newspaper reporter, national magazine editor and Fortune 500 executive, returns to his Mississippi roots to examine the forces which shaped him.

The book is published by Yoknapatawpha Press.

Check out this review of the book by HottyToddy.com Book Editor Allen Boyer.

“Autry was editor-in-chief of Better Homes and Gardens, and later CEO of Meredith Group in charge of the publication of 16 major magazines,” said Yoknapatawpha Press Publisher Larry Wells. “He arranged for the Meredith Group to sponsor a magazine feature writing program at the School of Journalism. He is a member of Ole Miss Hall of Fame. Autry is an inspiration for Ole Miss students. His legendary career is proof that the sky’s the limit for our j-school grads.”

It’s rare that a CEO writes poetry recalling lessons learned under a tin roof. Autry, then president of the Meredith Group magazine publishing division, wrote verse whenever and wherever he could—in board rooms between meetings, in hotel lobbies, on airplanes, in limos and taxis. Poetry would not leave him alone.

In his preface to Mississippi, Autry calls his verse “pieces” of recollections because “their shape comes to me as stories and then as pieces of a larger story.” His poems achieve a remarkably dense texture of memory forming what John Mack Carter has called a bridge of “kinship” between poet and reader.

This collection of 77 poems from Autry’s Nights Under A Tin Roof and Life After Mississippi focuses on the rhythms of rural Southern life, an odyssey of country funerals, weddings, church revivals, family reunions, and courtships drawn from a unique American heritage. 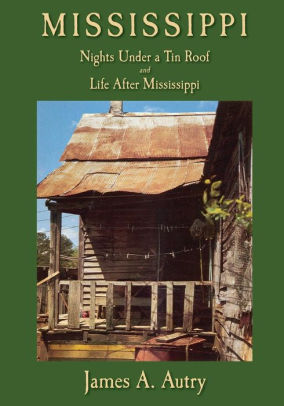 The book is illustrated with 66 black and white photographs of the rural South taken by WPA photographers and the author’s step-mother, Lola Mae Autry.

Bill Moyers believes Autry is one of America’s leading contemporary poets and featured him in two PBS specials devoted to American poets. Moyers says of Autry’s verse, “We all need the shelter of the tin roof today against the storms raging in our world.”

Autry is the author of 14 books, a poet and consultant whose work has had a significant influence on leadership thinking. His book, Love and Profit, The Art of Caring Leadership, a collection of essays and poetry, won the prestigious Johnson, Smith & Knisely Award as the book that had the most impact on executive thinking in 1992. Love and Profit also has been published in Japanese, Swedish, Chinese, Spanish, and Russian, and is still in print in paperback.

In addition, Autry has written the introductions to several books, and his writings have appeared in many anthologies and magazines. In 1991 the Kentucky Poetry Review published a special James A. Autry issue. He is a founder of the Des Moines National Poetry Festival.

He received considerable national attention when he was one of the poets featured on Bill Moyers’ special series, “The Power of the Word.” Moyers featured him again in 2012 on Moyers & Company on PBS. Garrison Keillor has featured his work on “The Writer’s Corner” on public radio. Autry is also featured in three videos, “Love and Profit,” which won a “Telly” award, “Life and Work,” and “Spirit at Work.”

In 1998, he received the Lifetime Achievement Award for Service to the Humanities from Iowa Humanities Board and Foundation. He was also the founding chair of the Claremont Graduate University’s Humanities Center Board of Visitors.

Autry was named a Distinguished Alumnus of the University of Mississippi and was elected to the Alumni Hall of Fame. He fulfilled his military service as a jet fighter pilot in Europe during the cold war and rose to the rank of Major in the Iowa Air National Guard.

Before taking early retirement in 1991 to pursue his present career, Autry was senior vice president and president of the Meredith Group, at the time a 500 million dollar magazine publishing operation with over 900 employees.