Born and raised an Ole Miss fan, 2016 graduate Catherine Carroon followed generations of family members to Rebel Nation before beginning her career in the world of sports through the University of Mississippi’s School of Journalism and New Media.

Although she was not 100 percent set on Ole Miss, she said she decided to attend the university due to its impeccable journalism program.

Carroon embarked on her journalism journey her freshman year; however, she quickly switched her major to the school’s integrated marketing communications program.

The decision to switch career paths came from her passion for sports. She said she knew she didn’t want a career in sports writing, but since the school did not offer sports marketing, IMC became the best decision.

“I thought [IMC] would be the closest thing to get me near that track,” Carroon said.

While attending the university, Carroon had her first taste of experience through ESPN as a “runner” for College Gameday. That behind-the-scenes experience influenced her to hone in on sports operations. 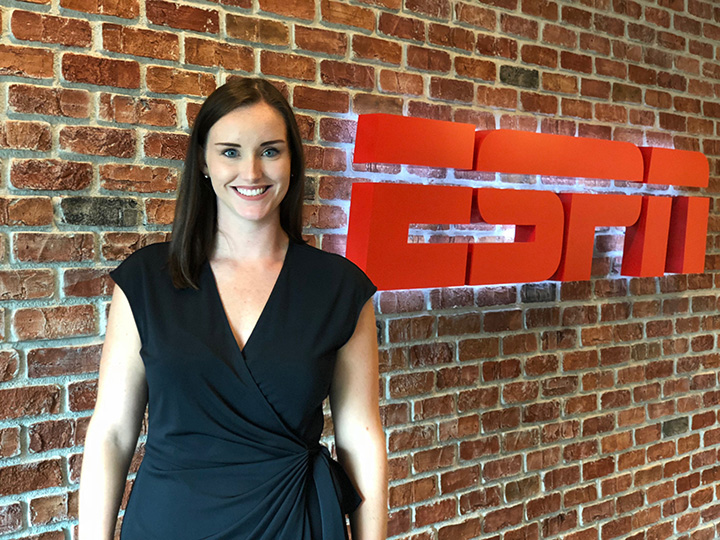 “ESPN was one of those things I always thought ‘there is a one-in-a-million special person’ who would get the job there,” Carroon said. “I never thought it would be obtainable.” Photo courtesy of Carroon.

Carroon furthered her skill set in sport operations by working in the university’s control room—an operations sports program run by ESPN for a majority of SEC universities.

Upon graduation, Carroon said she was unsure what her next steps would be. However, one of the coordinating producers, Meg Aronowitz, sent a mass email to all the SEC control rooms regarding an operations internship in Bristol, Connecticut.

One of the ESPN control room contacts informed Carroon and encouraged her to apply, she said.

“ESPN was one of those things I always thought ‘there is a one-in-a-million special person’ who would get the job there,” Carroon said. “I never thought it would be obtainable.”

Now as a operations coordinator in her third year at the network, Carroon said she can link the framework of her success back to her Ole Miss experiences.

Although her classes in sports and journalism taught her educational information she uses day to day, Carroon credits her time at the university’s control room for her hands on experience in sports. From interacting with producers to handling film, the experience gave her a bird’s eye view on how to work in sports operations.

Carroon has covered a plethora of sports since her stint at ESPN. From the Sunday night MLB package to working on Olympic Sports, there aren’t many sports the young journalist hasn’t covered.