The freshman experience at Ole Miss is a one-of-a-kind adventure most have the opportunity to share with their mothers and fathers. However, School of Journalism and New Media student Madeline Quon will have to share the newest chapter of her life from across the globe as her parents Shannon and Elizabeth and brother, Jackson, settle into Tokyo for their second stint.

The Quon family has strong ties to Ole Miss. It began when Elizabeth’s father, Greg Doiron, attended Ole Miss in the 1970s. Elizabeth followed the tradition and began her undergraduate degree in 1996 where she met her husband, Shannon Quon. 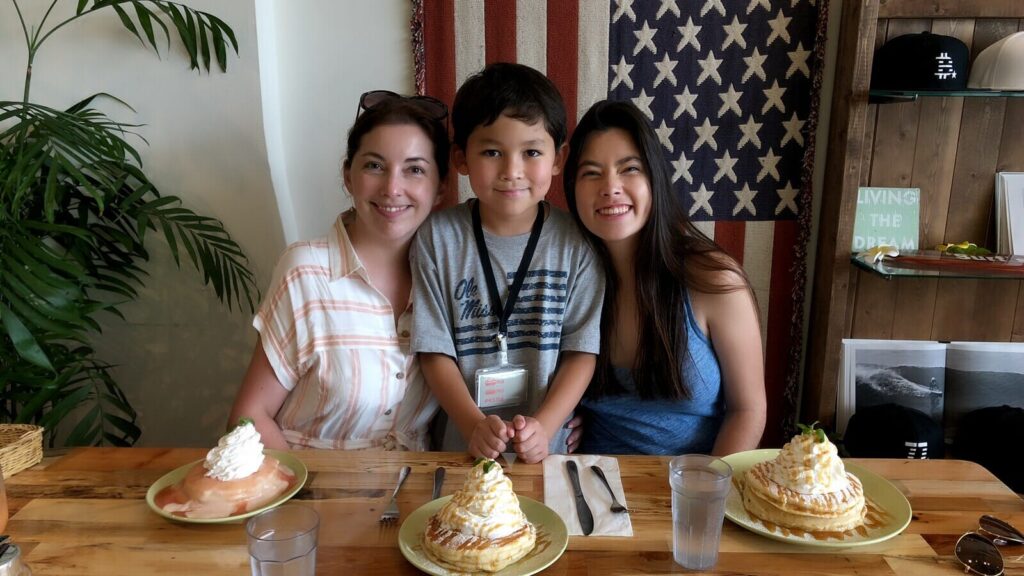 (From left to right): Elizabeth Quon, Jackson Quon and Madeline Quon at one of their favorite places in Tokyo—Cinnamon’s. Photo courtesy of Elizabeth Quon.

Although the path to Ole Miss looked like an obvious one for Madeline, her mother said she ventured across the country visiting several universities before finalizing her decision. Madeline eventually made her way to the Harvard of the South where she was able to scope out what would become her college of choice.

“First and foremost, it just felt the most like home to me,” Madeline said regarding her decision to attend Ole Miss.

Madeline was born in Oxford but never actually spent much time in the city. However, she knew it would be a good decision to attend Ole Miss because she has other family nearby.

“Knowing that my parents and brother are going to be in Japan, it will be nice to know that my grandparents are in New Orleans and cousins in Olive Branch,” she said.

With her family a far 6,782 miles from Oxford, Madeline said she looks at it as an opportunity to gain independence.

“If I have a problem I have to learn to solve it myself,” she said. “I can learn how to get out into the adult world.”

Madeline was able to move onto campus earlier than most students due to her acceptance into the Sally McDonnell Honors College. As her mother helped her move into her residence hall, they both knew it would not be until Christmas before the two would see each other face-to-face.

Elizabeth Quon left Tuesday morning on a flight back to Japan. Madeline said the feeling of her family being gone would not hit her until she realizes her mother cannot immediately respond to a text message or phone call.

The Quon family lived in Japan due to Shannon’s job he had in 2011. During that time, Madeline and her mother both recall the Great Sendai Earthquake that ignited a nuclear accident. It caused the family to move back to the U.S.

“I don’t think it really hit me how serious of a problem it was at the time until [officials] said there was radiation,” Madeline said.

As the Quon family separates and begins new chapters of their lives, all are excited for the adventure that will ensue. Madeline said she is excited to attend the School of Journalism and New Media where she plans to receive a degree in print journalism in hopes to one day work for the New York Times.

Elizabeth said she will have a hard time leaving her daughter behind, but she is excited to return to a country that has essences of the South.

“[Tokyo] has the humidity and it has the wonderful welcoming culture full of traditions. Even though it is a foreign country, it is very familiar feeling when you are there,” she said.