A School of Journalism and New Media instructor and her 30-student team won the Silver Anvil, the most prestigious U.S. award in public relations, on June 7 in New York for It Starts with (Me)ek, a public relations campaign they created asking School of Journalism and New Media students to “just pause” before stereotyping others.

The award, given by the Public Relations Society of America, is considered to be the Oscar of the PR industry. 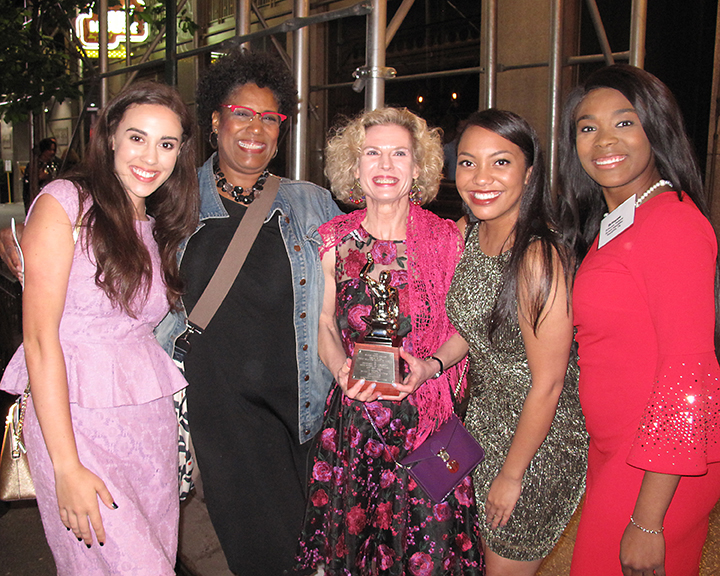 The It Starts with (Me)ek campaign won a Silver Anvil award, considered to be the Oscar of the PR industry, for internal communications. Actress and CBS Sunday Morning show contributor Nancy Giles presented the award to Senior Lecturer Robin Street at a ceremony in New York on June 7. Accompanying Street at the ceremony were three of the 30 students who worked on the campaign. Pictured from left, Grace Miller, Giles, Street, Bianca Abney and Brittanee Wallace. Photo by Stan O’Dell.

Meek graduates Brittanee Wallace, Bianca Abney and Grace Miller, three of the 30 students who served on the ISWM committee, joined Street at the ceremony.

The week-long campaign consisted of 50 events, speakers and activities, all based on the message to “just pause” before judging people based solely on one factor such as their race, gender, religion, sexual orientation, disability, mental illness or other factor.

Like the Oscars, Silver Anvils are given in multiple categories. It Starts with (Me)ek won in the internal communications category for government or non-profit organizations.