Baltimore native Herb May, a former University of Mississippi student, returned to the Meek School this week to talk about his job with On Location Experiences. May said the company is the official hospitality partner of the NFL, and he works as a manager in premium sales, selling NFL and sports experiences to diehard fans and corporate entities who host high level clients.

May, who attended a boarding school in Connecticut before becoming an Ole Miss student, said he came to UM because he was a football fan and wanted to have an NFL-related job. He worked for the Ole Miss Football Team as a recruiting and coach assistant his first year before becoming involved with Sigma Nu fraternity. 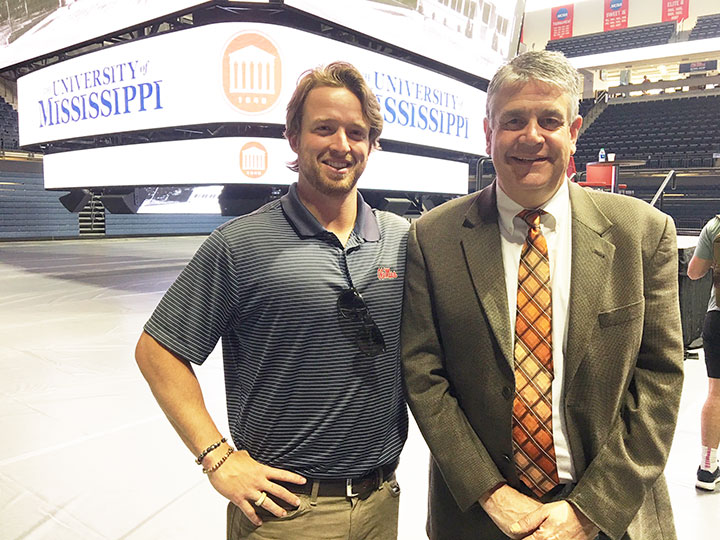 “I had a really great relationship with Scott Fiene,” he said, “and he was really helpful in guiding me where to look and what classes to take to get me through school. It was the best four and a half years of my life.”

Fiene is the assistant dean for curriculum and assessment and assistant professor of integrated marketing communications.

May said he learned there were many job opportunities in the world and decided to stop limiting himself. But after learning about a position with On Location Experiences through a connection with another Sigma Nu fraternity brother, he returned to his original career path seeking an NFL-related job. He said he was “perfectly persistent” when requesting a job interview with the company.

May said On Location Experiences owns a number of subsidiary companies, including businesses in the travel and entertainment industry. “It’s a full service, one-stop shop company that curates a premium experience around the NFL.” The corporate office is located in New York, but they are also establishing a presence in Atlanta.

May’s career advice? He encourages students to familiarize themselves with LinkedIn and use it as a tool to network with professionals. He said the after-college job search can be overwhelming. That’s why it’s important to start job seeking long before you graduate.

He tells students to pick five industries, five job roles, and five cities, and narrow down their search. He said don’t overlook small companies because they enable you to network with the heads of companies and other leaders within the company who may think of you when they move on to another job.

It’s also important to be humble. “Guys who have a certain degree and have done certain internships, but who are not willing to do the grunt work – get the coffees, get the mail, and do all that stuff – that’s where people lose jobs.”

May said he has prospective clients in Oxford, and as the company grows, they could be hiring in the future. He described his ideal employee.

“I need to have someone that I cannot only have a relationship with and be a mentor to, but that I can also be firm with when there is a mistake,” he said. “It should be someone who I could show why there is a mistake, how to improve it, and what I would have done differently. And I need someone on the other side of the table to be receptive to that.”