Dr. Samir Husni, professor, Hederman Lecturer, and director of the Magazine Innovation Center at the University of Mississippi’s School of Journalism and New Media, presented the award along with the MPA: The Association of Magazine Media.

In the hit HGTV series “Fixer Upper,” Chip and Joanna Gaines own and operate Magnolia Homes, a remodeling and design business in Waco, Texas. The show chronicles their adventures turning dilapidated houses into showplaces while helping revitalize neighborhoods throughout central Texas. Houses aren’t the only thing that has benefited from the duo’s magic touch. The couple’s magazine, The Magnolia Journal, won the 2017 magazine Launch of the Year Award at the American Magazine Media Conference in New York City on Feb. 6.

From a field of 212 new magazines launched with a regular frequency between Oct. 2016 and Dec. 2017, Husni said they selected 20, then carefully chose 10 finalists for the top honor.

What made The Magnolia Journal stand out? Husni said the magazine will launch its spring issue Feb. 13 with a $1.2 million rate base. 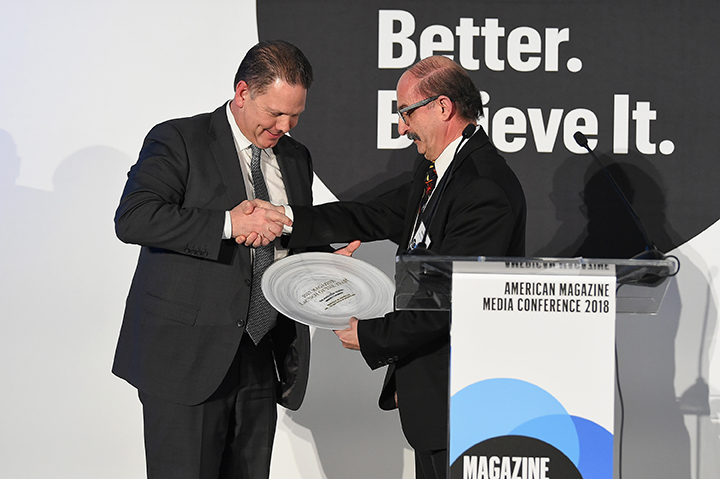 “It’s been a long time since a magazine has generated as much buzz in the marketplace as The Magnolia Journal has,” Husni said. “The connectivity of the content and the design made, and continues to make, this magazine fly off the shelves. Under the leadership of Editor-in-Chief Joanna Gaines, this print product creates a very interactive experience for readers. All in all, The Magnolia Journal burst onto the scene, and in less than a year, floated to the top, deserving the Launch of the Year Award – an honor well-deserved.”

Husni said the magazine has had amazing success on newsstands. The first issue sold out immediately, and Meredith Corp. had to issue a second printing. “It’s rare in that industry that takes place,” Husni said.

He said one reason the magazine has been successful is because of the couple’s strong connection to their fans. “People who watch their television program always tell me how close they are,” he said. “You feel like you are just talking to them. So the magazine was just an extension. It brought the pixels-on-the-screen-experience to something you can actually hold in your hand. Only print can give you that experience.”

Chip and Joanna Gaines, who serve as the editor-at-large and editor-in-chief, respectively, sent a video response about the award that played during the award ceremony. Joanna Gaines said they were honored that the Waco, Texas-based title won the 2017 Launch of the Year Award, and they thanked Husni.

“For us, this has been such an amazing journey watching these issues come to life,” Joanna Gaines said. “We’ve loved every minute of it … We are really excited about what’s to come with The Magnolia Journal.”

The event was held during the American Magazine Media Conference, the largest magazine media conference in the country. Among the top 10 finalists were titles such as Airbnbmag, Alta, Bake it up!, goop, MILK Street, The Golfer’s Journal, The National, The Pioneer Woman and TYPE Magazine.

“Almost every major magazine publisher published at least one new magazine last year,” Husni said. “That’s why I called 2017 the Year of the New Magazine. He said that’s evidence print magazines are not a dying medium.

Doug Olson, president of Meredith Magazines, accepted the Launch of the Year Award from Husni. “We’re super excited about it for lots of reasons,” Olson said in a video. “Number 1, it was a huge team effort starting with Chip and Joanna Gaines and their vision and our execution on that. Second, Meredith doesn’t win very many of these awards, so we are super excited and very much appreciate the recognition.”

And Newell Turner, one of Husni’s former UM magazine students, who rose to become the Hearst Design Group editorial director, will be presented the Silver Em, the University of Mississippi’s highest award in journalism, at a campus event during the ACT 8 Experience. The event will be held held April 18 in the Overby Auditorium in Farley Hall on the UM campus at 5:30 p.m.