New York Times national correspondent, Jonathan Martin, visited students in an advanced reporting class at the Meek School of Journalism and New Media Monday, Oct. 23, offering advice and sharing details about his path to becoming one of the nation’s leading political reporters.

For the past four and half years, Martin has crossed the country to cover campaigns, elections and the larger political trends behind them. Prior to joining the Washington bureau of The Times, he worked as a senior writer for Politico, and has also been published in The New Republic, National Journal, The Washington Post and The Wall Street Journal. 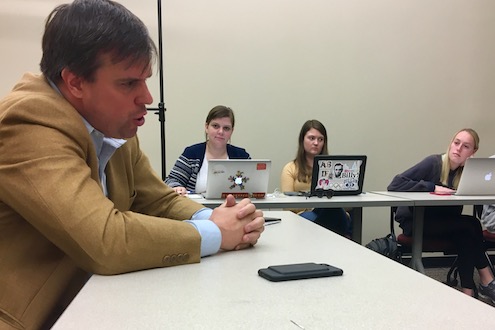 Following a weekend touring the town of Oxford with his family and taking in the Ole Miss vs. LSU pre-game festivities in the Grove, Martin stayed in town an extra day to speak with students from the Meek School and the Trent Lott Leadership Institute.

Martin said some of his favorite parts of the job are traveling to places all over the country to write stories. He explained how his job works around the presidential cycle and that he is much busier “in the even years.”

“I kind of look at [this job] in two ways,” he said. “One, I’ve got campaigns and elections. Those have a start, a middle, and an end. It’s pretty straightforward: somebody wins, somebody loses…The other thing I do, which I think is so much more challenging, also it’s more enriching, is sort of looking at what’s happening in the country with the lens of our politics and how that’s informing what’s going on.”

Martin said covering national politics has become particularly complex in the past few years, as both the Democratic and Republican parties have faced challenges from within. He spoke about his experience working with the Trump administration, and said President Trump had come after him personally two to three times throughout the campaign.

Most recently, President Trump accused Martin of setting Tennessee Senator Bob Corker up by taping him without his awareness and capturing him saying, among other things, that Trump was recklessly tempting “World War III.”  The Times later published the audio tape in which Corker could be heard asking to be recorded.

Martin also talked about how The Times correspondents respond to the President’s social media. He said The Times reporters have learned to discern whether: “This is an extraordinary moment in American history vs. He’s blowing off steam on Twitter once again; let’s see what’s actually happening.”

Offering some insider insight into The Times’ new policy on social media, which prohibits journalists from expressing partisan opinions, political views, or candidate endorsements, Martin said, although there has been a little pushback, most people support the new policy. He personally believes it offers useful guidance, and ultimately encourages people to think twice before they post.

Offering advice to anyone who wants to pursue a career in journalism, Martin said good reporting requires cultivating reliable sources: “It’s not complicated. Treat people like you want to be treated. Don’t always call them when you need something. And over-report…make more phone calls than you think you need. It’s easier to get things done working ahead, and your story (is)New going to be better for it.”